It's not the long-awaited full-frame, or even a DSLR for that matter, but today Pentax has announced a very interesting 16-megapixel all-in-one "bridge" digital camera called the Pentax X-5.  The X-5 looks the part: it closely resembles the Pentax K-5 DSLR in terms of styling, with a sizable grip and a traditional would-be prism housing bearing the Pentax logo.  Its button layout is very close to that of the intro-level Pentax DSLRs, with a few modifications here and there to support features unique to this type of camera, such as built-in power zooming and the electronic viewfinder. 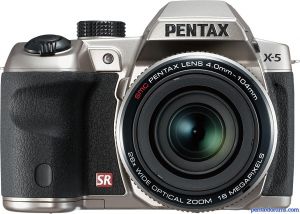 The X-5 houses a very powerful "megazoom" lens featuring 26x optical zoom over an aperture range from F3.1 to F5.9. Its zoom range is equivalent to 22.3-580mm on film, meaning that you can zoom all the way from wide-angle to extreme-telephoto without having to switch lenses (or cameras).  On top of that, the lens focuses as close as 1 centimeter, allowing you to take real macro shots (this feature is also found on the Pentax Optio WG-2, where we found it to work very well)! 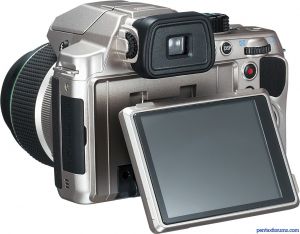 Best of all, this camera is loaded with features and only costs $279, making it an amazing value!  It can shoot full-HD video, capture photos as quickly as 10FPS, and gives you plenty of manual control if you want to forgo full automation.  On the back of the camera you'll find a large 3-inch tilting LCD (with half-VGA) resolution, as well as a QVGA (approx.) electronic viewfinder (EVF).  We think that this camera will be an attractive option for many consumer photographers, as well as a nice backup body for more serious shooters, and we hope to bring you an in-depth review of it once it becomes available!  Until then, you can pre-order the camera in black or silver and expect it to ship toward the end of September.

The only thing that we have second thoughts about is this camera's sensor.  While Pentax has included sensor-shift shake reduction in the X-5 body, the sensor itself closely resembles the 1/2.33-inch backlit 16-megapixel unit found in the Pentax Optio WG-2, which we found to perform poorly for landscapes and distant subject.  It could very well be that the X-5's larger lens will make up for the small sensor size, but seeing that other manufacturers have started putting such a big emphasis on large-sensor compacts (i.e. Sony with their highly-successful RX100), the future of digital camera surely lies there.  Nevertheless, we have no doubts that this handy little Pentax camera will be a success, as not even Olympus can't beat the low $279 price tag!

The full X-5 specifications will soon be posted in our Pentax Camera Database, where a basic listing with more photos of the camera has already been created.