An all-in-one camera with 52x zoom 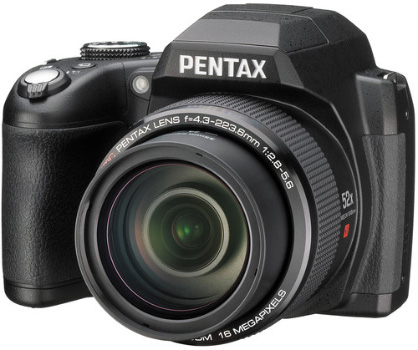 Ricoh Imaging has just officially announced the Pentax XG-1, an all-in-one "bridge" digital camera that combines the simplicity of a point-and-shoot with some of the advanced features typically found in a DSLR.  The XG-1 is the successor to the Pentax X-5, which was originally announced in 2012 and just recently discontinued.

We are happy to see that Ricoh has decided to continue maintaining its consumer-friendly camera lineup, and that the Pentax logo will live on outside of the DSLR realm.  This is interesting given the fact that the former Pentax WG waterproof camera lineup now exclusively bears the Ricoh logo, and that Pentax representatives have previously stated that future compacts would be Ricohs.  But we digress...

In terms of specifications, the XG-1 is very similar to its predecessor.  It has a 16-megapixel 1/2.3" sensor, a 3" LCD screen with 460k dots, an electronic viewfinder with 200k dots, and support for Full HD video recording.  There are three noteworthy improvements in the XG-1, however:

These improvements cater to consumers and experienced users alike, since you get twice the zoom range as well as the ability to manually control the shutter speed and aperture.

With that said, we believe that the appeal of Pentax's new bridge camera may be limited, not only compared to the competition, but also compared to its predecessor.  Will the XG-1 be a dated camera even before it hits the shelves?  Not only has the Pentax XG-1 lost the tilting LCD screen and rear control wheel of the X-5, but its launch price is higher at $399.95.  This represents a $120 price increase in the US market compared to the X-5's initial pricetag of $279.99, and it simply isn't competitive without a rebate.  Prior to being discontinued, the Pentax X-5 was selling for as little as $149.95, and we hope that the XG-1 will be able to regain some appeal by being offered at this price point in the years to come.

According to official specifications (which may be wrong), the XG-1 only has half the battery life of the X-5, at 240 photos per charge of its li-ion battery (with 50% flash usage).

Competing cameras currently outclass the XG-1 in terms of features and/or price.  For example, the Nikon Coolpix L830 offers a higher-resolution LCD screen and costs just $196.95 ($299 at launch).  The Canon PowerShot SX510 has built-in Wi-Fi for easy file sharing at retails for $199.00 ($249 at launch).  The Panasonic Lumix FZ70 offers a slightly wider 60x zoom lens and otherwise-identical specifications for $297.99 ($399 at launch).  Finally, if you paid $30 more to get a Nikon Coolpix P600 for $429, you would get an articulating high-resolution LCD screen, built-in Wi-Fi, and full-HD video recording at 60 FPS.

Ricoh Imaging Americas states that the XG-1 will be available in the US as early as August, 2014.

The full specifications of the XG-1 are available in our camera database.

We don't want to jump to conclusions: perhaps the Pentax XG-1 has some hidden traits that aren't evident based on its specifications.  It could turn out to be a wonderful camera, and that's exactly what we will be investigating in an upcoming in-depth review!