By PF Staff in Pentax Announcements on Nov 8, 2013 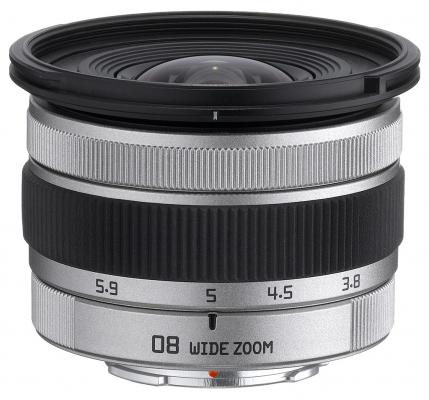 Ricoh has officially announced a 17-27mm (eqv. on Q7) wide angle zoom lens for the ultra-compact Pentax Q system, officially known as the SMC Pentax-Q 08 Wide Zoom 3.8-5.9mm F3.7-4. This lens is intended for street shooting, snapshots and landscapes. It weighs in at a mere 75 g but nevertheless packs state-of-the-art lens design features such as:

The Q/Q10 and the Q7 have different sensor sizes so the angle of view covered by the 08 lens depends upon the camera:

The largest aperture is F3.7 at the widest end and F4 at the longest end. Our tests of other Q lenses show that diffraction sets in at around F5.6 with visible reduction in resolution. If this also holds for the 08 lens it effectively limits the useful range of apertures to 3.7/4/4.5 which is less than satisfying. We will know more when we get our 08 lens and can test it.

In any event it is nice to see that Ricoh is committed to expanding the Q-system. While this system hasn't many followers in the US it has been more successful in other markets and it continues to be the smallest interchangeable lens system on the market.

An lens hood is available, but is not included with the lens: 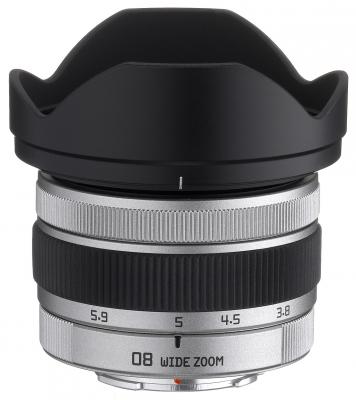 We recommend getting the hood with the lens to keep flare down.

The lens will hit the stores in December with a suggested retail price in the US of $499. At that price point we're certain that this lens will only be a hit amongst the few hard core Q aficionados out there. For the rest of us, not so much- after all, the Q7 kit is the same price, if not cheaper. You also can get the discontinued K-30 with the 18-55 mm kit lens for the same amount. Granted, you can't pocket that combo, but it does set things in perspective.

Check out our database for the full technical specifications or click here to pre-order this lens at B&H Photo.