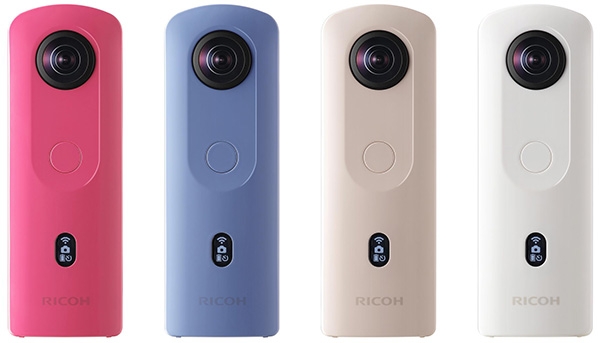 Ricoh has announced the release of the Theta SC2, which is the new entry level model in the Ricoh Theta 360° camera series.   The camera will become available starting December 2nd at a price of $299.

The 360° camera market is a growth market, and, fortunately, Ricoh was one of the early players and now enjoys a healthy market share. Since the release in 2013 of the first Theta model, Theta cameras have been used in a multitude of environments.

The new Ricoh Theta SC2 is pegged as an easy-to-use model, allowing anyone to capture high-quality spherical images. It snaps photos at approximately 14 megapixels, and captures smooth, immersive 360° spherical video at 30 FPS in 4K (3840 x 1920 pixels).

Additionally, the Ricoh Theta SC2 comes with a variety of shooting modes such as "Face" mode, which recognizes human faces and applies skin smoothing, and "Night View" mode for shooting low-noise footage after the sun goes down.

New is an OLED status display in the lower section of the body which allows checking of a range of information such as setting modes and battery power remaining. The SC2 also features a new button that lets the user switch to self-timer mode, making the camera much easier to operate in a standalone manner.  The internal storage space has also been expanded comapred to the Theta SC.

The SC2 can be used as a live blogging camera that you can carry with you to record the events of your day.

The Ricoh press release is found here. Specifications are found in our camera database here. Also, be sure to stop by our Theta forum if you have photos you'd like to share.