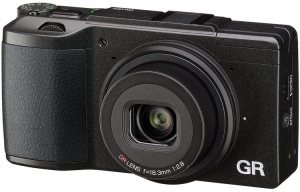 This new model debuts built-in Wi-Fi and NFC for wireless shooting and file transfers.  It also adds six new effects (Clarity, Brilliance, Bright, Portrait, Vibrant and HDR Tone) and supports wireless control of the latest Pentax flashes.  From a physical standpoint, the GR II is identical to its predecessor with the exception of a small bulge on top, which likely houses the wireless hardware.  The bulge sits flush with the hotshoe and thus does not add to the overall dimensions of the camera.

All in all, not much has been changed from the original GR, which was already an impressive, feature-packed camera to begin with.  While we wanted to see enhancements to the original GR's video mode, we had few other reservations about the camera and can strongly recommend it for demanding photographers looking for a highly portable wide-angle compact.  Learn more in our Ricoh GR review.

The GR II will retail for $799 and is expected to ship in July, 2015.  The original GR sold for the same amount at launch.

Order the original GR for $579

Does the addition of Wi-Fi alone justify the release of a new model?  What features would you like to see added?  Let us know in the comments below!

DENVER, CO, June 17, 2015 - Ricoh Imaging Americas Corporation (Ricoh Imaging) today announced the newest camera in its GR series, the RICOH GR II, a premium compact camera with Wi-Fi and Near Field Communication (NFC) functionality. The GR II is the smallest premium compact with DSLR image quality, making it ideal for advanced photographers who want the quality of an SLR camera but the portability of a smart phone.

“With the introduction of the GR II, we are taking the premium compact camera to a new level, offering the key features desired by photo enthusiasts: high resolution, a wide angle lens, quick shoot time and portability,” said Jim Malcolm, President of Ricoh Imaging Americas Corporation. “With its new Wi-Fi and NFC capabilities, photographers can now easily share their exceptional street and travel shots more easily, benefiting from the best of both worlds.”

Features of the new GR II camera include:
- High-quality, high-resolution: The GR 18.3mm F2.8 lens is a compact, high-performance GR lens with a focal length of 28mm (in the 35mm format). The GR II also boasts a large, APS-C-size CMOS image sensor with approximately 16.2 effective megapixels. Equal in imaging area to the type used for most PENTAX digital SLR models, the sensor combined with the GR lens assures exceptional image quality.
- High-speed: The GR II’s high-speed AF system can focus in a mere 0.2 seconds, thanks to the optimization of its lens drive mechanism and AF algorithm, and it also has a one second start up and shut down time. Further, with the GR II users can go instantly from the play back mode to shooting by half pressing on the shutter release button.
- Pocket-sized: Even though it incorporates a host of Wi-Fi functions, the GR II comes in the same size as the previous GR model. Its exterior housing is made of lightweight, high-rigidity magnesium alloy, while its grip is shaped for easy, comfortable hold, and features a control button layout that enables simple one-hand operation.
- Expanded creative functionality: The GR II provides a total of 17 effect modes with six new modes added including: Clarity, Brilliance, Bright, Portrait, Vibrant and HDR Tone. The new GR II also includes a full range of shooting functions including an in-camera RAW data development function, full HD movie recording for high-quality, extended videos; and,  wireless control of PENTAX AF360FGZII & AF540FGZII external flashes.

Pricing and Availability
The Ricoh GR II will be available for purchase July 2015 in stores nationwide and at www.ricohimaging.com for a retail price of $799.95.