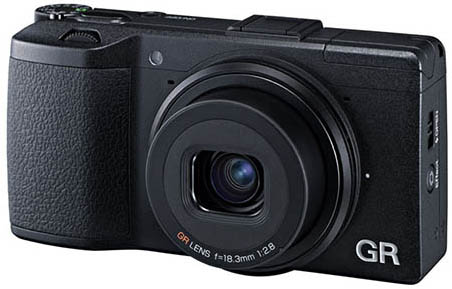 Pentax Ricoh have just officially announced the new Ricoh GR, the latest in Ricoh's lineup of high-end compact digital cameras.  The new GR incorporates an APS-C sensor in a an elegant, pocketable body that is styled just like its GR-series predecessors.

Based on the official specifications and the accompanying product information, we feel that the GR is going to be a true "photographer's camera" for those who demand the best in image quality but can't always carry around a bulky DSLR.  The Ricoh GR is the world's smallest and lightest APS-C compact camera. Its small size will allow professionals and enthusiasts alike to carry it everywhere that they go!

If this alone isn't good enough, then we'll add that the GR is also going to be one of the cheapest APS-C compacts, available in the US for just $799. The camera is designed to embody four core values which are of key importance to Ricoh: compactness, superb image quality, fast performance, and being a joy to use.

At the heart of the GR is a 16.2-megapixel APS-C sensor that does not incorporate an anti-aliasing filter. Thus, some might describe the GR as a pocketable version of the Pentax K-5 IIs! Combined with a specially-designed 18.3mm F2.8 lens (28mm equivalent on film), it is inevitable that the GR will deliver stellar image quality no worse than that of the similarly-specced Nikon Coolpix A, which has already received very favorable reviews.  Pentax Ricoh states that the GR's lens was meticulously designed to maximize sharpness and minimize distortions and aberrations, and internal tests show that it is consistently better than the lens of the GRD IV, and that it can outperform a Pentax DSLR with the 18-55mm kit lens.  In addition, Pentax Ricoh claims that the GR's lens is superior to that of the Coolpix A in terms of MTF; we will of course perform tests to confirm these claims in practice.

If marketed properly, the GR could prove to be some serious competition for the Coolpix A, or any high-end compact, for that matter. This is thanks to the GR's low price ($300 less than the Nikon), and because the GR may turn out to be better in terms of general performance, handling, and autofocus speed, which has been exceptional in previous Ricoh cameras.

While you're probably more interested in the specifications of this camera, what especially caught our attention about the GR is the fact that it's the first camera to show clear evidence of collaboration between Pentax and Ricoh, now known as Pentax Ricoh Imaging.  A feature formerly unique to Pentax cameras has made it into the GR: TAv mode. This shooting mode allows you to set the desired shutter speed and aperture while the camera chooses the appropriate ISO.

Read on for more details and photos of the GR!

The Ricoh GR has now been added to our camera database, where we will soon be posting its extended specifications.  In addition, you'll be able to post your own review of the camera on this page once the camera becomes available.

We are confident that the specifications alone won't do justice to the GR, as on top of its intuitive user interface, the camera is loaded with bonus features such as multiple exposures, ND filters, native eye-fi support, digital filters, DOF preview, and a 35mm crop mode.  Stay tuned for our in-depth review to see just how well this camera performs!

We'd like to congratulate Ricoh (now Pentax Ricoh) for designing a product that seems to be very close to perfection and pricing it at the low end of the high-end compact market.  We are looking forward to reviewing the Ricoh GR and comparing it to other serious compacts such as the Fuji X100s and Nikon Coolpix A in the very near future.

The Ricoh GR is scheduled to start shipping in May.