Giveaway of 360 Ricoh Thetas followed by a photojournalism contest 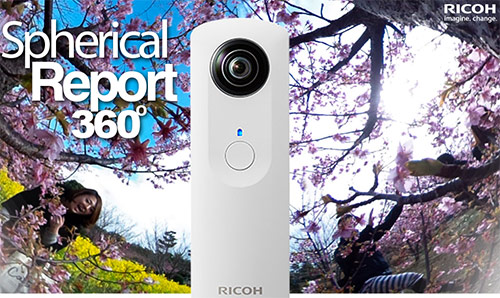 Ricoh Imaging Americas ("Pentax USA") has just announced a Ricoh Theta 360 giveaway coupled with a photojournalism contest with a little twist.  The Theta is a unique camera that captures 360-degree spherical images at the push of a button.

The event, which is being hosted by CNN as a sponsored feature, has two phases.  During the first phase, users will describe in 360 words or less what they would be able to do with a Theta and why they think they should get one.  Submissions will close on April 10th, and by May 1st, 360 winners will receive a free Theta from Ricoh.

Once the Theta winners are announced, the "Spherical Report 360" contest will begin.  Participants will then report on real-world events as photojournalists, using spherical images from the Theta.  Each month through August, an "MVP" winner will receive a Ricoh Commander watch.  In September, three grand prize winners will be announced, and these individuals will be invited to an exclusive round-table discussion in September.  The grand prizes include a Pentax K-3 18-135mm kit and two limited edition Ricoh GR cameras.

This sounds like a great opportunity if you're looking to start a career in photojournalism, and we are happy to see that Ricoh products are being recognized by a nationwide news company! To enter the giveaway, please visit:

Remember to sign up before April 10th for a chance to receive a free Theta and enter the reporting competition.  As this event is sponsored by Pentax USA, only residents of US are eligible to participate.

Pentax to Dominate Lens Market by 2015