A camera that can capture 360-degree spherical images

By PF Staff in Pentax Announcements on Sep 6, 2013 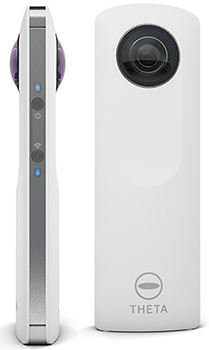 Ricoh Imaging has just announced the Ricoh Theta 360, a new type of camera that will soon be joining the ranks in the Pentax and Ricoh lineup.

The Theta, which is designed to capture spherical images with a 360-degree field of view, is in no way a traditional camera. Thanks to its dual-lens design, this device is capable of literally capturing everything around, above, and below you. In addition, rather than being fully standalone, the Theta transmits photos to smartphones for viewing, editing, and sharing using a wi-fi connection.  At launch, the Theta will be compatible with iPhone and iPad devices running iOS 6 or higher; Android support is expected by the end of the year.

The unprecedented type of imaging that the Theta delivers will no doubt open up new possibilities for photographers to choose to try out this intriguing camera.  However, Ricoh is also venturing into unexplored territory with this launch.  The Theta's introductory price tag of $399 may be too much for most consumers to handle— especially considering the fact that you're probably not going to be in the mood to capture everything around you very often.  Below are some examples of "flattened" files from the Theta (from the official press release):

With the dedicated Theta app or using desktop software (the Theta supports a USB connection in addition to wi-fi), it's possible to view rectangular versions of the originally-spherical photos.  While not rectilinear by any stretch of the imagination, this conversion makes it much easier to appreciate the full field-of-view that the Theta offers.  Engadget has posted some examples that you may wish to check out.  For those who dare venture outside of the flat image medium, viewing the theta's files in 3D spherical form is actually even more interesting.

The Theta's specifications aren't too shabby: it features enough internal memory to store 1,200 pictures, focuses on just about everything that's more than 10cm away, weighs only 95 grams, and easily fits in your pocket.  It captures JPEG files at approximately 6.4 megapixels, and all exposures are automatically saved for exposure compensation, which can set in 1/3 EV steps up to +/- 2EV.  The shutter speed ranges from 1/8s to 1/8000s, and the ISO ranges from 100 to 1600.  Its battery should be more than big enough to get you through the day, again assuming that you find enough 360-degree subjects to shoot.

The Theta is already listed on us.ricoh-imaging.com (formerly pentaximaging.com).  Later this month, it will become available for pre-order via the Pentax web store (pentaxwebstore.com).  Amazon will also start carrying the Theta starting in October.

Just like the recently-announced Sony QX-100 "clip-on" smartphone camera, the Ricoh Theta is without question an interesting and rather futuristic product.  However, only time will tell whether or not consumers are going to be willing to spend $399 on a gadget like this, let alone enjoy it.  Regardless of how it fares, though, we're glad to see that Ricoh Imaging (the company that manufactures Pentax cameras) is looking more at the future than the past.

To learn more about the Ricoh Theta, visit theta360.com, the official web site for this product.