By PF Staff in Pentax Announcements on Jan 4, 2017

Ricoh has unveiled the latest development in its Theta line of 360-degree cameras at this year's CES show in Las Vegas.  The new Ricoh R is the industry's first camera capable of long-term continuous streaming of spherical video.  Recording can be carried out for up to 24 hours thanks to an AC adapter, stand, and dedicated PC connection via USB and HDMI.

More importantly, the Ricoh R will come with a software development kit (SDK) giving programmers full access to process and display the camera's video in custom computer applications.  This will make 360 video far more accessible than it has ever been, and it secures Ricoh's spot at the forefont of innovation within 360-degree photography and videography. 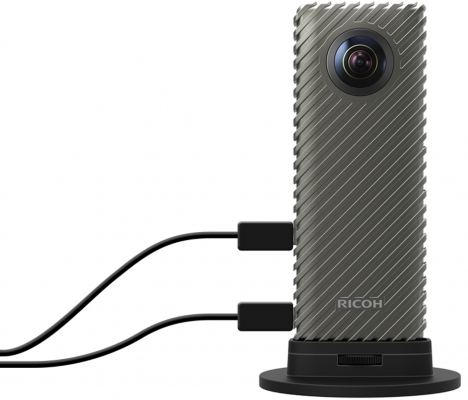 While the Ricoh R has a form factor very similar to the popular Theta S and Theta SC spherical cameras that we recently reviewed (designed for hand-hend photography and shorter video clips), its mission is entirely different: it focuses primarily on continous video streaming. The underlying lenses are the same, and the output video resolution is 2K at 30FPS.

Interestingly, the Ricoh R does not appear to be marketed by Ricoh Imaging, but rather the parent company, Ricoh Inc.  The model on display at CES was a prototype; market availability is expected in the Spring of 2017.

We will post an update once the full specifications of the camera are released.  Until then, you can learn more about on the R's official web site, http://ricohr.ricoh/en/.

TOKYO and LAS VEGAS (CES 2017, South Hall Booth #26717), January 4, 2017－Ricoh today announced the industry’s first camera capable of delivering up to 24 continuous hours of fully spherical, 360-degree live video streams. Being unveiled and demonstrated in Las Vegas at CES 2017, the camera and related technology will be sold as the Ricoh R Development Kit and be available in spring 2017.

Live streaming of fully spherical video is an emerging technology, with content creation, distribution and viewing still largely in their infancy. Following a series of beta tests with a diverse group of customers – ranging from a live concert produced by a leading entertainment company to an internet high school enrollment ceremony where students “participated” via live streaming video on virtual reality (VR) headsets – Ricoh has determined there is significant business potential for this new technology.

Applications for a compact camera capable of continuous, high-quality and fully spherical video streaming are wide ranging, and Ricoh anticipates the new technology will be embraced by industries including entertainment, gaming, education, scientific research, and many others. For this reason, it is initially offering the camera as part of a development kit to allow third parties to create applications that will enable its use in a variety of environments and industries.

Using Ricoh’s original fully spherical imaging technology, the RICOH R Development Kit can live stream fully spherical 360-degree image in 2K resolution at 30 frames per second. A unique and first-of-its-kind feature of the RICOH R technology is that the video is stitched within the camera in real time to the Equirectangular Projection Format, which is the standard format for fully spherical images. Video is then output via HDMI® or USB, and—by using an AC power adapter – continuous, live streaming up to 24 hours is possible. To keep the camera thin and lightweight, it records onto a micro SD card.

The RICOH R Development Kit consists of the camera, camera stand, downloadable software development kit (SDK), plus image-control tools and source code. The prototype is being showcased at CES 2017 at South Hall 2F, #26717.