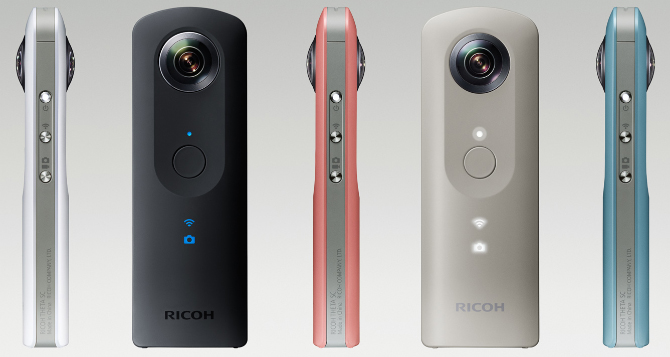 Ricoh Imaging has just announced the fourth model in the rapidly evolving Theta spherical camera lineup: the new Theta SC is a 360-degree camera with similar hardware to what we saw in the Theta S, albeit in a smaller form factor.

The Theta S, which started shipping earlier this year, represented the next step forward for the Theta lineup.  It delivered a 14-megapixel resolution— a considerable improvement over the 6 megapixels of previous models— alongside wireless live view and streaming video.

According to the press release, the Theta SC is a mid-range model positioned between the current Theta S and the outgoing Theta m15.  More specifically, it appears that the Theta SC simply makes all the Theta S features available at a lower price point of just $299, with only one change compared to the S: no HDMI out.  If we were to guess, this means that a new "flagship" model will be rearing its head in the coming months.  In the meantime, the Theta SC will carry on as a highly-capable offering for those who want to take the Theta system for a spin (no pun intended).

Order the Theta SC on Amazon

Alongside this new camera model, Ricoh will soon be launching an updated model app to further streamline the spherical shooting and sharing process.

Learn more about the Theta's capabilities in the Theta S Review

The Theta produces standard .JPG files which can be viewed conventionally or interactively via a 3D viewer (such as theta360.com, the Theta app, or third-party solutions). Our forum supports spherical image sharing: any link to a photo on theta360.com will automatically be converted into a widget similar to the one below.

We recently used the Theta S to cover this year's Photokina trade show.  We feel that the interactivity of these images takes event photography to a new level:

While the Theta S seems to continue being underrepresented amount our Pentax community, this innovative camera managed to make it to Amazon's best-seller spot within the compact camera category, and continues flying high within that market segment amidst declining interest in conventional compact cameras.  The Theta is popular not only in the US, but also Europe and Japan.

The Theta SC will be available in four colors: white, red, blue, and beige.

Plan to get a Theta SC?  Leave a user review and tell us how you like it!

Read on for the full press release as well as product photos.

Newest addition to Ricoh’s pioneering Theta line makes it easy for anyone to shoot and share high-quality spherical stills and videos, available in four colors

Market demand for cameras that capture immersive imagery is on the rise, and experts predict that devices required for augmented- and virtual-reality experiences—such as 360-degree cameras and VR headsets—will be at the top of consumers’ holiday 2016 gift lists.

Ricoh offers the industry’s most extensive line of spherical imaging cameras, known for their high image quality, sleek design and ease of use. First introduced in 2013, Theta cameras are unique in their ability to allow consumers to record fully spherical images that show the entirety of a scene in photos or videos. The pocket-sized Theta SC is the fourth-generation Theta, joining the award-winning, top-of-the-line Theta S and entry-level Theta m15 series cameras.

Like its predecessors, the Theta SC boasts a stylish and sleek design, lending itself to quick and convenient operation. The camera can be handheld with one-button operation or placed on a flat surface or tripod to be remotely controlled by a smartphone and the newly updated Theta S app. It comes in a range of attractive colors including beige, blue, pink and white for a wide range of users.

The Theta SC delivers the same high level of image quality provided the Ricoh Theta S—with a high-performance CMOS image sensor and large-aperture dual lenses—in a more lightweight package. It captures 14-megapixel, high-resolution stills and records high-definition (HD) video clips up to five minutes in duration, in keeping with consumers’ interest in shooting and sharing short video clips. The resulting spherical images can be easily uploaded to the dedicated theta360.com website; posted and shared via Facebook, Google+, Google Maps and YouTube; as well as shared via Twitter and Tumblr.

With the introduction of the Theta SC, Ricoh is also unveiling an updated Theta S app for iOS and Android devices. The newly updated Theta app is designed to be even easier to use— making capturing, viewing, managing and sharing fully spherical imagery a snap.

“Our goal is that the Theta SC will introduce more people to 360-degree spherical imaging,” said Kaz Eguchi, president, Ricoh Imaging Americas Corp. “With the growing popularity of immersive imagery, augmented and virtual reality, we wanted to produce a high-quality camera at an affordable price point that appeals to anyone who is interested in capturing and sharing the world around them in this new, exciting digital imaging format.”

| Pricing and Availability |
The Ricoh Theta SC is now at www.ricohimaging.com and retail outlets nationwide for a manufacturer’s suggested retail price of $299.95.

| About Ricoh Theta |
The Ricoh Theta series camera is the brainchild of Ricoh’s Visual Revolution or VR division, an organization that is focused on developing innovative consumer imaging technologies. The camera line’s combination of small size, high quality imagery and incredible functionality are a result of Ricoh’s many decades of experience in advanced imaging and optical technologies. The company has long been a leader in professional printers and copiers, and is known for its highquality optics and optical components. A key achievement with the Theta series is an ultra-small twin-lens folded-optical system capable of capturing two wide-angle images and then marrying them into a single spherical image.

The company now known as Ricoh Imaging Americas Corporation was originally founded in 1919, under the name Asahi Optical Joint Stock Co. and launched its first SLR camera in the 1950s under the PENTAX name. Today, Ricoh Imaging Americas Corporation continues to produce the heritage-rich, award-winning line of PENTAX DSLR cameras, lenses and sport optics equipment as well as Ricoh’s offering of stylish and compact digital cameras, known for their wide-ranging, rich set of features.