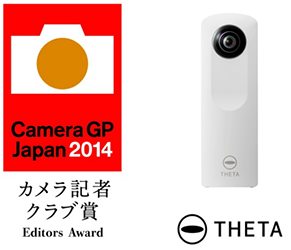 The Camera Journal Press Club of Japan has just announced its Camera Grand Prix Award winners for 2014, among which you'll find the Ricoh Theta.  The Theta won the Editor's Award for its unique capability to capture fully-spherical images.

"This product is highly innovative in its concept and well beyond the conventional category of cameras. The photographer can effortlessly capture fully spherical images with a single shutter release, and can even post and share captured images on the internet. It provides an entirely new visual expression which no other digital compact camera or smartphone has succeeded in capturing, and offers totally new possibilities as a communications tool."
-Camera Journal Press Club selection criteria

Indeed, the Ricoh Theta is able to capture your entire surroundings at the push of a button.  While its images typically require a dedicated smartphone or dekstop app to view, they can also be displayed as two-dimensional circular photos or projected onto large panoramic prints.

Four other products were recognized in this year's Grand Prix: the Canon 70D and Olympus OM-D E-M1 also received the Editor's Award, the AF-S Nikkor 58mm F1.4G won Lens of the Year, and the Nikon Df was named Camera of the Year.  The Df also received the Readers' Award for its retro design and professional-grade image quality.

The Ricoh Theta is available for sale directly from Pentax as well as on Amazon for $399.  It's an expensive gadget, but it undoubtedly opens up new possibilities for reporters, interior photographers, and other creative applications.

The Theta is a part of the Pentax/Ricoh camera lineup

You can read more about the Theta in our homepage announcement, and browse users reviews in our camera database.