A mountable camera for action videography

Ricoh Imaging has now officially announced the new Ricoh WG-M1, a mountable action camera that builds on the existing rugged Pentax/Ricoh "WG" (Wild Gear) camera infrastructure.  It is primarily designed for video but can also capture stills, and thus competes directly with other action cameras such as the GoPro lineup.

Ricoh's WG-M1 represents an entry into the adrenaline-end of the action camera market. No longer simply an underwater point-and-shoot family, the WG lineup now includes a helmet-, wrist-, structure-, ground-, and tripod-mountable body. Looking at the body, it has side-mounted buttons with a top-mounted display, a stopwatch-like layout that will be immediately familiar to anyone with an active lifestyle. 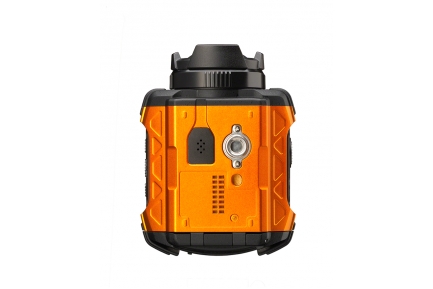 Ricoh will offer a host of mounting accessories; wrist, helmet, spike, magnet, adhesive, handlebar, and pistol-grip mounts will be available upon or shortly following release. As the photo above shows, the mounts will attach to the WG-M1 via a standard 1/4-20 tripod screw.  An adhesive mount is included in the box, while the other mounts are sold separately. 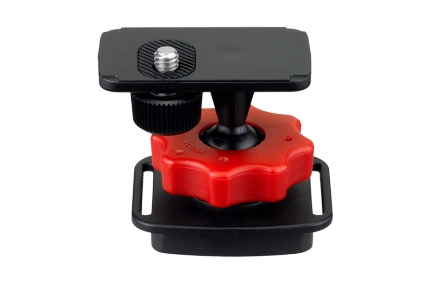 Definitely a promising and useful mount for people who like urbex, parkour, or other adventures around fixed objects, the magnet mount provides a fixed-mount which can be easily repositioned. This is the mount to choose when making your own action movie if you need to scale the underside of a moving truck. 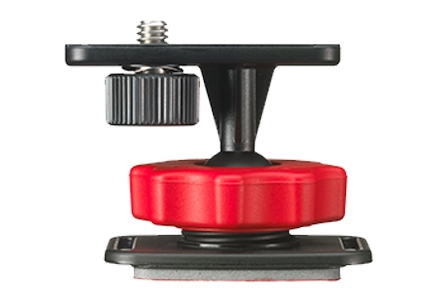 Along the same lines as the magnetic mount, the adhesive mount provides a permanent mount placement for non-ferrous surfaces. This is good for permanent camera placement or in small places other mounts can't go. This mount is also included in the box. 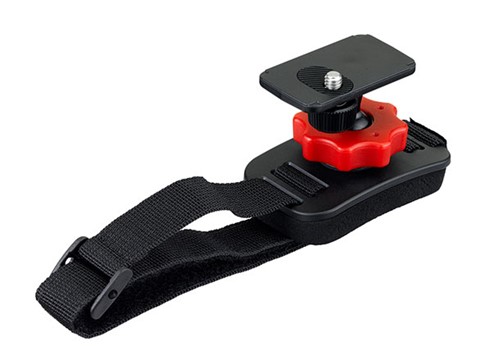 The helmet mount is great options for motorcyclists, cyclists, white water rafters and kayakers, and other people mounting a camera on their helmet. The wrist mount, perfect for divers and joggers, looks the same but with a shorter strap. 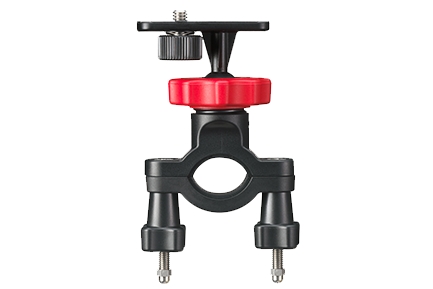 Another good option for cyclists, the handlebar mount will provide a different first-person view than the helmet mount and doesn't risk the camera being caught in low branches. 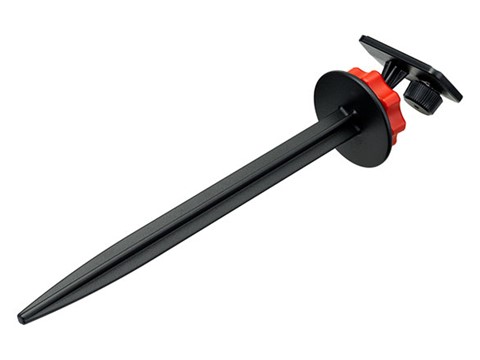 The spike mount is great for rock climbers and people trying to find out which neighbor's dog is using their rose bushes as a toilet. Also, this is ideal for staking vampires AND getting great up-close footage while it happens. 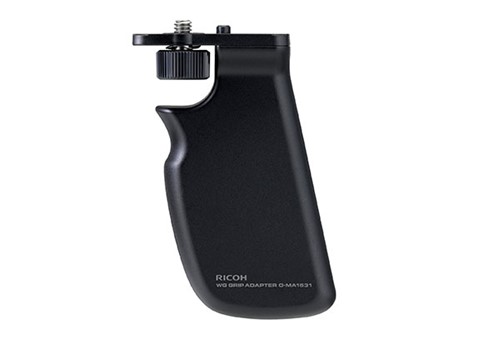 The pistol mount allows for easy camera panning and steadier hand-holding. It's not a great option in a convenience store or when police are around. 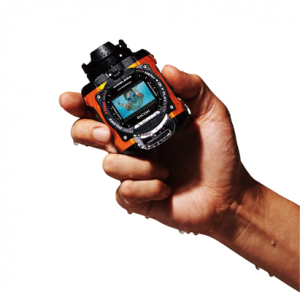 With the size and ergonomics of a stopwatch, the WG-M1 stands apart from competitors because of its size and layout. But that's not all that differentiates the WG-M1.

The camera's primary competitor will be the GoPro Hero 3+ Silver Edition, which also sells for $299.99. So here is a quick spec comparison:

Ricoh is entering a new market segment with this product launch, and that's without question a very positive thing to see. Yes, action cameras have been on the market for some time and Ricoh is as late to the action cam party as someone who stopped along the way to play with one. Ricoh's offering is a different entity than it's main competitor at the same pricepoint.

Ricoh's offering has a different shape and layout from GoPro (but is not dissimilar from the Drift HD). It also has a similar layout to the Kodak camera from which it is derived, but is signficantly smaller (and therefore probably more attractive.) 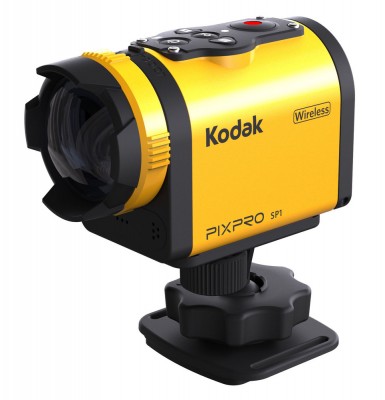 The action camera market is a multi-billion-dollar market. GoPro has the name and sponsors major events. Unfortunately, shape and ergonomics alone cannot differentiate a clever product (just ask Sony about the Betamax or Toshiba about HD DVDs.) Without a significant and innovative media blitz, the awkwardly named WG-M1 (the name does not quite flow off the tongue like GoPro Hero) will have a hard time making a meaningful dent in the market. GoPro has the high-adrenaline market cornered as well as the share-your-own-adventures market. Ricoh can make this a player, but not without a paradigm shift in the manner in which they sell their products.

There's also some silver lining: given the WG-M1's similarity to the Kodak camera pictured above, apart from the physical design, little or no R&D time was spent by Ricoh on this product, allowing them to focus on developing more interesting products in-house.

RICOH IMAGING AMERICAS CORPORATION announces the launch of the RICOH WG-M1 digital action camera. From the creators of the original adventure camera the newest addition to the waterproof, cold proof, and shock resistant WG series is equipped to capture life’s moving adventures. The WG-M1 is the must have adventure camera for capturing your life in motion.

The RICOH WG-M1 is WiFi enabled, waterproof to an impressive depth of 32 feet without requiring a protective housing, shock-resistant against a fall from 6 feet, and cold-resistant to temperatures as low as -10°C. With its ultra-wide-angle lens, this extraordinary camera captures dynamic Full HD movies with a realistic sense of depth. The WG-M1 provides a host of advantageous features including multitasking that allows the user to check real-time images during both still and movie recording, and a 1.5-inch color LCD monitor.

Approximately 14.0 effective megapixels captures vibrant, high-resolution still images, while its high-speed, continuous shooting capability records subjects at a speed of roughly 10 images per second. In keeping with the rugged theme of the WG series, its lightweight body features an unparalleled outdoor-oriented design and large control buttons that make operating the camera a breeze in any condition. Combining the WG-M1 with an array of newly introduced camera-mount accessories opens many options and creative solutions in capturing adventure-packed images and movies.

“With the WG-M1 we’re building on the foundation of the adventure-proof, WG World.” said Jim Malcolm, Executive Vice President, Ricoh Imaging Americas Corporation. “By combining WiFi connectivity and dynamic image quality the WG-M1 captures life’s adventures in motion, from the top of a mountain to your own backyard.”

The WG-M1 comes complete with a carabiner-equipped strap for easy carrying, and a WG adhesive mount to attach the camera to different surfaces using a powerful adhesive tape. In addition, there are numerous optional accessories available including a wrist strap mount, a helmet mount, and a magnet mount. Create and capture your own adventures with the Ricoh WG-M1.