On March 25, 2021 RICOH announced an upgrade to their top of the line 360 degree camera, the Theta Z1, now available with an internal storage of 51GB. Like the previous (19GB) model the new model features a resolution of 23 MP (3360 x 6720 pixels). The spherical image is captured by two lenses and two 20MP back-lit one-inch sensors. 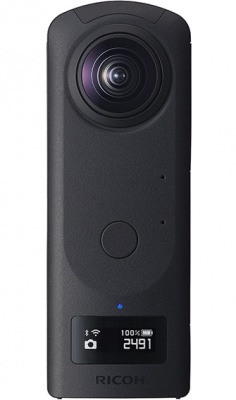 Select key features of the Z1 (both models):

A comprehensive list of specifications can be found in our database here.

Since RICOH launched the world's first 360-degree consumer camera*1 in 2013, the company has stayed at the forefront of this emerging technology as it continues to evolve and become an integral tool for the burgeoning industries of virtual reality (VR), social media, business, real estate + more. Recently, with the need to balance health safety practices with economic activities, the use of 360-degree content is expected to further expand in the new areas, such as viewing real estate properties remotely and monitoring and managing progress at construction sites.

The RICOH THETA Z1 51GB is the flagship model of this series. RICOH employs superior optical and image processing technologies, cultivated through years of high-performance camera development, to pursue its highest resolution and quality to date. While maintaining the outstanding performance of the RICOH THETA Z1, the internal storage capacity has been significantly increased from 19GB to 51GB. The compact main body is equipped with a 1.0-inch back-illuminated CMOS image sensor, enabling approx. 23MP resolution 360-degree still images. It supports a diverse range of shooting modes, such as aperture priority, allowing users to take high-quality images regardless of the setting: outdoors, nighttime, indoors, tropical beaches, or snowy mountain views—nothing is off-limits. Moreover, it is possible to shoot considerably smooth and immersive 360-degree videos in 4K (3840×1920 pixels) and 30 frames per second (fps) thanks to exceptional 3-axis rotational stabilization to compensate for rotational shake.

With a 0.93-inch organic EL monitor and a Function (Fn) button, the main body of the camera grants users access to a multitude of information at a glance, including the number of possible shots, exposure settings, and more, thus greatly improving the operability of the camera itself. In addition to JPEG, RICOH THETA Z1 now supports Adobe® DNG format (RAW) so that users can enjoy professional image editing as with a typical digital SLR camera. The Android™-based operating system now offers performance improvements by providing flexibility in the number of expansion plug-ins a user can install on the Z1. The overall functionality of the latest model from RICOH meets the high demands of serious photographers and offers optimal performance for both professionals and amateurs alike.

*1 As a mass-produced consumer product capable of capturing the scene around, above, and below the device in a fully spherical image (as of October 2013, based on RICOH research).

* Adobe, Photoshop, and Lightroom are trademarks or registered trademarks of Adobe Systems Incorporated in the United States and other countries.