Pentax to Appear at Photokina 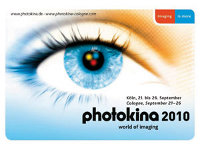 Pentax is confirmed to be attending Photokina, one of the world's leading photography expositions taking place annually in Cologne, Germany.

At this year's event, which is scheduled to run between September 21st and 26th, we expect Pentax to be unveiling the rumored K-5 and KR bodies, as well as new and future lenses. Other camera manufacturers will also be unveiling their latest at the event.

Pentax representatives will be found at stand A040 in Hall 02.2, as well as at stand Piazza P005.