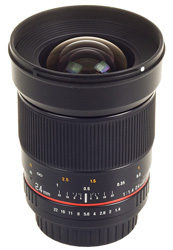 Samyang has recently announced a new 24mm F1.4 manual focus lens which will be produced in 6 different mounts, including Pentax K.

The lens will become available in late 2011 or early 2012.  We have added the full specifications to our lens database.

Discuss the Samyang 24mm announcement on the forum