A fast telephoto prime for Pentax

The new Samyang 135mm f/2.0 ED UMC will be produced in a variety of mounts including the Pentax K mount.  It will also be available for Canon, Nikon, Sony Alpha, Sony E, and Micro Four-Thirds.  The lens has a full-frame image circle and it of course also supports smaller formats.

Like most other Samyang primes, this lens supports aperture automation but needs to be focused manually.  The Pentax version thus includes an aperture ring with the "A" setting and corresponds to the KA mount designation.  This means that the lens is fully compatible not only with the latest Pentax DSLRs, but also film SLRs dating back to the 1970s.

In some markets, the Samyang 135mm may be re-badged and sold under different brand name, such as Rokinon.  These clones, such as the Rokinon 135mm f/2.0 ED UMC, are optically and mechanically identical to their Samyang counterparts, and are priced equally at launch, but may be subject to higher rebates in the future.

The full specifications for this new lens can be viewed in our lens database.  The US list price is $549 and pre-orders are currently being accepted by B&H Photo, who expect it to start shipping in early February.

A special version of this lens designed for videographers has also been announced and it will be sold under the Rokinon brand name. 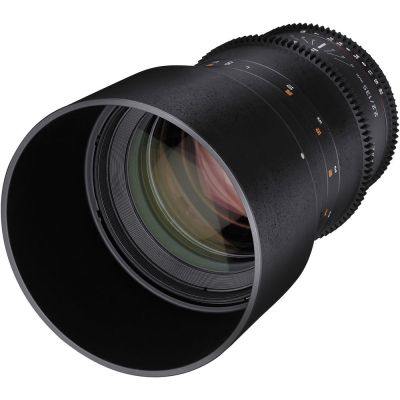 The cine variant (pictured above) has the same optics as the standard version.  The only major change is the presence of gearing on the aperture and focus rings.  It carries a $50 price premium ($599 MSRP) and will not be available for Pentax.