By PF Staff in Third-Party Announcements on Mar 7, 2012 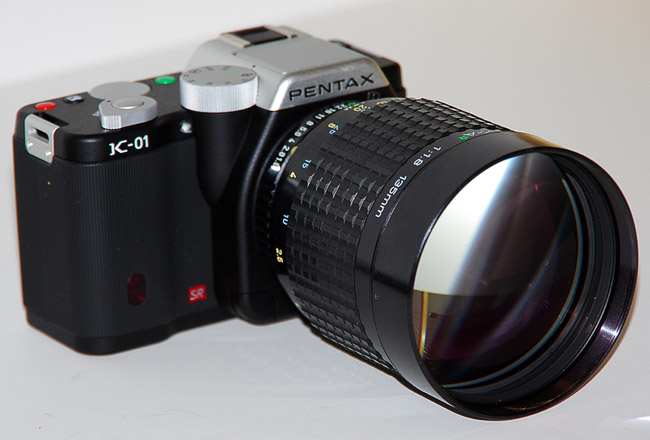 Our (production) Pentax K-01 and DA 40mm XS lens arrived yesterday, and we have already started testing the camera and getting a feel for how it performs!  As interesting as the unboxing itself was, it won't be the focus of this initial hands-on commentary.

Our first impression is that it's a very solid and well-built camera which handles extremely well, especially with small lenses.  In real life, the design is much more attractive than it seemed based its press release photos. The image quality is exceptional, even when shooting with fully automated settings.  The new Prime M processor delivers a smooth shooting experience as well as an unlimited image buffer, allowing for uninterrupted image capture in continuous mode.  The K-01's core menu system is very similar to that of the K-r, thought it incorporates many new innovative features, including new custom image presets, focus peaking, AF enlargement, automatic shadow/highlight correction, easier firmware updates via the menu, as well as several options specific to its mirrorless design.

The new 40mm lens seems to have the same optics as the DA 40mm Limited, and it looks very stylish when mounted on a K-5! 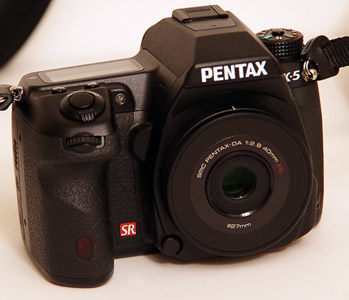 The K-01's contrast detect autofocus (CDAF) performs very well; it is more than adequate for its target audience. However, it is noticeably slower and less sensitive than the Pentax SAFOX IX phase-detect TTL AF system (PDAF) found in current DSLRs.  It is slightly faster and more accurate than the DSLR live view contrast-detect AF system overall (much faster in bright light, but not much better at close range or in low light) and consistently seems to use a different (improved) algorithm to lock focus.  Face detection has been vastly improved.  The AF assist light does a very good job of helping the camera lock on dark areas, although indoors, we have found subjects on which the K-01 is simply unable to focus (with which the K-5 had no trouble).

Below is a low-light AF speed test and a shooting performance test:

As would be expected of this type of camera, the K-01 isn't perfect for more serious shooters and Pentax has deliberately excluded certain features.  For example, it can only sustain the 6FPS frame rate for a few frames (though it never locks up, unlike current DSLRs), and bracketing is limited to 3 frames.  On the plus side, several improvements over the current DSLRs have been made, namely to movie mode: manual controls can be applied while recording, autofocus works while recording (using the AF button, although performance is mediocre), and the SR system is practically inaudible.  Additionally, image playback and writing speed is significantly faster overall.

Below are two quick tests of the image buffer in JPEG "Hi" and "Lo" mode, with all in-camera image correction and noise reduction disabled, as before:

There is almost no shutter lag, and assuming you disable the Marc Newson startup screen (Settings Menu -> LCD Display -> Startup Screen), the camera starts up very quickly.  Latency in live view is much lower than it is on the K-5 (you will hardly ever notice that it's there), although the image does get choppy in low light or at high ISO.  The K-01 also incorporates new power-saving features, such as the option to disable SR in live view (where it engages just before the image is taken), and an auto-dimming LCD.

Here is a video showing recovery time and performance with instant review enabled in continuous mode:

Overall, the K-01's shutter is noisier than we had expected, and since CDAF does more guesswork than PDAF, focusing is also more noisy than it would be on a DSLR.

Stay tuned to our upcoming K-01 in-depth review for a complete list of pros and cons, a more thorough (and more refined) evaluation, field and daylight shooting experiences, image tests, and sample photos.  We aim to make the review available by Sunday, March 11th.  For now, all we will say is that after a whole day of use, the K-01 has yet to disappont us, and thus we think that it will be a very successful camera. Pentax Ricoh will surely see even more success once their new Prime M processor makes it into future DSLRs!