By PF Staff in Third-Party Announcements on Jun 9, 2015 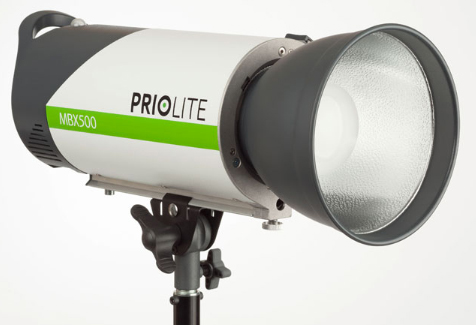 Priolite, a German strobe manufacturer, unveiled today a breakthrough lighting system for professionals shooting with Pentax DSLRs.  The wireless Priolite Pentax HotSync Solution enables high-speed flash synchronization up to the maximum available shutter speed (i.e. 1/8000s or 1/4000s) on existing Pentax DSLR bodies, including the medium-format 645Z.   It is the first such system for Pentax cameras, and it is revolutionary in the sense that it renders leaf shutter lenses unnecessary; such lenses were in short supply to begin with and are not available new. The system opens up a world of possibilities, especially for medium format photographers, while also supporting advanced APS-C bodies such as the Pentax K-3.  We see this as a very welcome announcement in light of the many criticisms that the standard Pentax flash system has received.  It makes the Pentax 645Z even more competitive by giving it a technological edge over other medium format cameras with regard to lighting.

The manufacturer states that "utilizing the entire range of possible shutter speeds with the Priolite Hot Sync System allows photographers to shoot with wide-open apertures in sunlit environments, freezing motion of fast moving objects, and enables them to create images difficult or impossible to capture before."  Priolite's HSS strobes were previously only available for Canon and Nikon cameras.

This system is "plug and play" and it has been designed work with any Pentax DSLR that otherwise supports high-speed flash sync (HSS).  No firmware update is required.  The product is not developed or officially endorsed by Ricoh Imaging.

Read on for a hands-on look at the Priolite system and the official press release.

This hands-on first look at the Priolite system was contributed by Alex Munoz, a Pentax ambassador and professional fashion photographer currently using the Pentax 645Z system.  He was closely involved in the development and testing of the system.  Learn more about Alex in his Pentaxian profile.  He can be contacted directly with any questions that you may have about the strobes.  Also, have your say in the comments section below!

Who Needs a Leaf Shutter Anyway

Medium format cameras continue to be the tools of choice for many photographers. The higher resolution and larger pixels in the latest CMOS-based models by PhaseOne, Hasselblad, and Pentax enable us to capture images otherwise impossible with smaller sensor DSLR’s. Yes, there are (soon) DSLR options at base ISO, but the smaller sensor size makes it difficult for lenses to resolve 50+ megapixels. It is likely that for particular applications, medium format systems will continue to be the best tools available for quite some time.

Additionally, many medium format photographers utilize leaf shutter lenses on their systems, allowing them to synchronize with high powered studio strobes at up to 1/800th of a second (Hasselblad), and even up to 1/1600th of a second in some cases (PhaseOne). Flash Photography at higher shutter speeds enables the photographer to better balance available light with flash, freeze motion, while also being able to shoot at wide open apertures, creating an almost three dimensional look, that we can often find in images shot for advertising campaigns. While Pentax used to offer leaf shutter lenses, these have been discontinued, leaving photographers with no other choice than taking images at 1/125th of a second with studio strobes due to the use of a focal plane shutter. An otherwise superior medium format system has been severely limited by the lack of higher flash sync speed.

I have shot with medium format cameras for quite some time, and I came to appreciate the creative possibilities offered to me when being able to use higher shutter speeds with studio strobes. When the 645Z was lacking this ability, I realized that this had to change. There were two options: get Ricoh to make leaf shutter lenses, or take a different approach altogether. The different approach is what prevailed, and I am glad I have been given the chance to be deeply involved in bringing high speed flash photography to the Pentax camera system.

Up until now, Pentax cameras supported High Speed Sync, but only with (mostly) Pentax made speedlights. If one has to light a big set, overpower the sun, and overcome other obstacles, these speedlights are simply not enough: they lack power. So I started to look into studio strobes and technology that would enable higher flash sync speeds. I looked at the usual suspects: Broncolor, Profoto, Hensel, and many others. I had several criteria for evaluating with whom to work on bringing a solution to Pentax users: time to market, pricing, technology, and ecosystem. I realized that not all solutions are created equally, and that some are better for high speed flash photography than others.

Take for example power output: profoto offers 500 w/s lithium ion powered moonlights, but limits high speed sync capabilities to the a range within 2 stops of the maximum power output (125 w/s-500 w/s). What if you need less light, because you are in a controlled studio environment and work on product photography, or something else that simply doesn’t require this much power? You could resort to your speedlights, but they recharge slower, and you might have to use several units to create the desired look, not even accounting for the lack of light modifiers you could attach to them. Other solutions by broncolor offer up to 800 w/s, but require a power outlet: no battery powered option there.

As I continued my analysis, I came across a company called Priolite. Based in Germany, they have been manufacturing high-end studio strobes for quite some time, and the founder of the company is a long-time veteran with several decades of experience in the lighting industry. Priolite also offers the most powerful and technically best implemented solution for high speed flash photography: the maximum power they offer is 1000 w/s available in a moonlight or as a pack and head combination. What sets them apart is that all these hot sync (that’s what Priolite calls their high speed sync technology) strobes offer higher than x-sync capability at any power setting and in 1/10th increments, starting at 17 w/s, and all the way up to a maximum of 1000 w/s. Overpowering the sun with a single strobe on location, and with no need for any generators, is now possible. Having an extra stop can make all the difference on location, and it saves you money, because two 500 w/s heads are more expensive than a single with 1000 w/s.

Priolite has a built-in 2.4 GHz wireless connection, allowing you to remotely trigger the flash, control output, assign teams, and control all, or individual lights at once. This system has been available for Nikon and Canon cameras for quite some time, but Pentax remained out of reach. After several month of working closely with Priolite in Germany, I am happy to announce that Priolite was able to develop a remote that is compatible with most Pentax cameras. Cameras such as the K3 or k3II can sync at up to 1/8000th of a second with these Priolites, others, such as the KS1 and KS2 for example have been successfully tested at up to 1/6000th of a second.

The photos below were taken with the Pentax 645Z and two Priolite lights.  Click on any thumbnail to enlarge.

The real game changer, and why I went through all of this, is the ability to sync high powered Li-Ion strobes at up to 1/4000th of a second with the Pentax 645Z. This is better than any other medium format system out there and with no need for leaf shutter lenses, no need to upgrade what you already have, or change how you take you images. Get the Priolite system, dial in your shutter speed and flash power settings and start taking images. The integration is absolutely transparent, and you can easily use any shutter speed you desire: the flash will fire appropriately with no black bars on your images. Syncing at up to 1/4000th of a second is more than 1 stop faster than PhaseOne, and up to 3 stops faster than Hasselblad is able to achieve. If you think of stops in terms of speed, that means the object you are trying to capture can move up to 3 times faster across the sensor area with a 645Z, than it can with any of the competitors, and without introducing motion blur to your images.

This really changes everything. There is so much more to these lights than I have already shared with you, and while I have tested them with many Pentax cameras, there are still more to be added (confirmed to be working well), and new features we are working on, to make this the best system in general.

Similar to the Priolite Remote Control for Nikon and Canon, Pentax users are now able to synchronize their cameras with the help of the Priolite Hot Sync System, and use Priolite’s high-powered Li-Ion battery operated strobes at up to 1/8000th of a second**. Utilizing the entire range of possible shutter speeds with the Priolite Hot Sync System allows photographers to shoot with wide-open apertures in sunlit environments, freezing motion of fast moving objects, and enables them to create images difficult or impossible to capture before. The ability to remotely control high-powered battery operated studio strobes anywhere between 17 w/s and up to 1000 w/s per light*** with the Priolite Remote Control opens up endless possibilities for creatives all around the world.

“High-powered strobe photography at shutter speeds of up to 1/8000th of a second, combined with the ability to operate any of the Priolite Hot Sync strobes at any power setting and without the need for an outlet, truly represents a quantum leap forward for all owners of Pentax cameras,” says Joachim Renschke, the CEO and founder of Priolite GmbH. By using the 2.4 GHz spectrum, the Priolite Remote Control supports 4 groups, 9 different IDs in each group, 1/10th of a stop power adjustments, and remote control of modeling lights wherever your next assignment might take you. Photographers now no longer have to rely on generators while on location, searching for outlets, or running wires when setting up their lights.

“As a Pentax 645Z user I am excited about Priolite’s development of their Hot Sync System. It enables Medium Format flash photography in a way impossible before, and with no need for leaf-shutter lenses. The 645Z can now reliably sync at up to 1/4000th of a second, making it the ultimate and most sophisticated tool amongst professionals looking for high resolution, high image quality, and high speed flash photography. Unlike other systems that can sync with flash lights at no more than 1/1600th of a second, Priolite’s solution is a clear game changer in the world of photography,” says Alex Munoz, professional still and motion photographer from Los Angeles, California.

* Camera must support HSS flash functionality; not all models may be supported at launch
** Depending on the maximum shutter speed of the camera
*** Currently the most powerful single-head, Hot Sync enabled Li-Ion powered strobe on the market