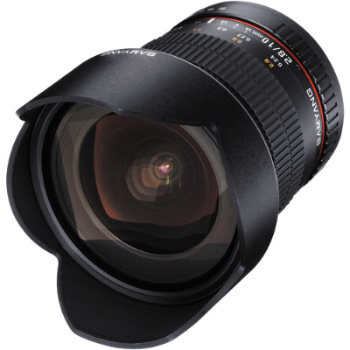 The much-anticipated Samyang 10mm F2.8 ED AS NCS CS ultra-wide angle lens has finally officially been announced in the US.  The lens will shortly be available in a variety of different DSLR mounts, including the Pentax K-mount.  In addition to being offered under the "Samyang" name, it is also being re-branded as "Rokinon" and possibly other brands in different markets.  B&H Photo expects it to start shipping as early as next week; the list price is $529.

A field of view of 109.5 degrees makes this the widest rectilinear (i.e. non-fisheye) lens currently available for Pentax DSLRs, and its price makes it competitive alongside wide Pentax primes such as the 15mm F4 Limited and 14mm F2.8, though it is considerably wider.

Although the Samyang lens is manual focus, it does support automatic aperture control (via its "KA" mount).  It also includes some of Samyang's latest lens technologies, including a Nano Crystal lens coating for superior flare control.

We will reviewing this lens in-depth once it becomes available.  Until that time, see its full specifications in our lens database, or pre-order it now.