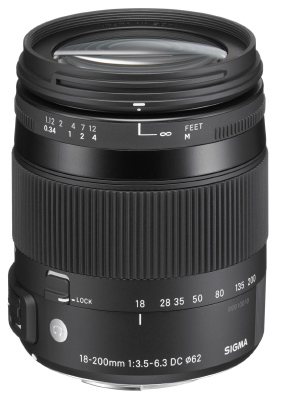 The one and only CES product announcement related to Pentax this year came from Sigma, which announced the new Sigma 18-200mm F3.5-6.3 DC Macro OS HSM "Contemporary" superzoom lens for all camera mounts, including Pentax.  This lens is designed as an all-in-one solution for everyday use and it is more affordable than the 18-250mm in the current Sigma lineup.  Like other modern lenses, the 18-200mm of course includes silent autofocus.

This new lens replaces the Sigma 18-200mm OS HSM II which was originally launched in mid-2012. Compared to its predecessor, the 18-200mm "Contemporary" sports a redesigned plastic barrel that resembles the other Sigma Global Vision lenses rolled out over the course of 2013.  The barrel design is  more elegant and simpler than before.  The new lens also features rounded aperture blades, weighs less (430g), and focuses closer in macro mode (1:3).  Best of all, it's being launched at a reasonable introductory price of just $399 in the US - a whole $100 less than its predecessor.  This makes it a great upgrade over the standard 18-55mm kit lens as well as a viable alternative to the Pentax 18-135mm for those who do not need weather sealing and who desire the extra reach.

For the full specifications of this new Sigma lens, visit its entry in our lens database.  It is already available for pre-order at US retailers including B&H Photo.

Sigma also announced at 50mm F1,4 "Art" lens at CES, but it will not be produced in the Pentax mount based on what we know so far.