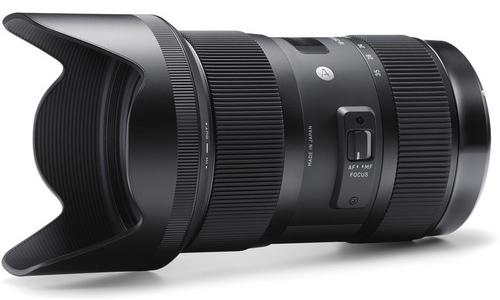 This wide-angle zoom deserves special recognition for its F1.8 maximum aperture design.  It is the first zoom lens of its kind, and we are delighted to see that Sigma has decided to offer it for the K-mount.  All professional zoom lenses currently on the market have constant apertures no faster than F2.8.

The new 18-35mm is a DC-type lens, meaning that it is designed for use exclusively with APS-C cameras.  As part of Sigma's new "Art" lens series, it features an elegant design and is built using durable "thermally stable" plastic.  It focuses using a built-in HSM motor; such motors have enjoyed great reliability and delivered speedy AF speed in other Sigma lenses.

Best of all, this lens can soon be yours for the low price of $799.  It has just become available for pre-order in the US.  Sigma expects to ship this lens in late July for Sigma, Canon, and Nikon, with the Pentax and Sony versions coming out shortly afterward.

Full specifications for this 18-35mm lens found in our Sigma lens database.