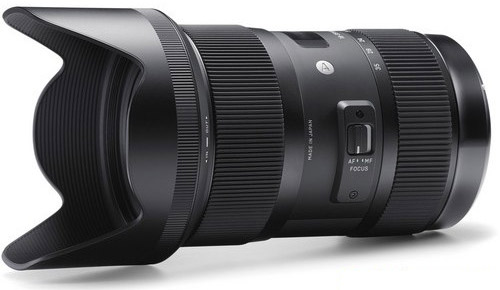 Sigma Japan announced today that the Sigma 18-35mm F1.8 wide-angle zoom will start shipping in the Pentax and Sony mounts "towards the end of June".  The Pentax version of the Sigma 30mm F1.4 was announced in a similar manner back in February, and it started shipping in the US only days after the promised Japanese launch date.  Now that a definitive launch date for the 18-35mm has been revealed, Pentax users who have been waiting for this lens will be able to have it in their hands in just a few weeks.

It's been over a year since Sigma originally announced the 18-35mm, and it has been available for Canon, Nikon, and Sigma cameras for several months.  The 18-35mm has been recognized for its optical performance alongside the fact that it is the fastest DSLR zoom lens currently in production.  As part of the Sigma Global Version "Art" series, this lens features Sigma's latest technologies, including silent HSM autofocus, a streamlined design using Thermally Stable Composites (TSC), internal focusing and zooming, 4 aspherical lens elements, and 5 Special Low Dispersion (SLD) lens elements.

If you want to be among the first owners of this lens, don't forget to get your pre-order in at B&H.  The lens retails for $799 in the US.