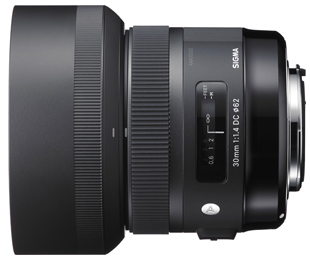 Sigma Japan has just announced the imminent launch of its 30mm F1.4 DC HSM Art lens for the Pentax and Sony mounts.  This lens was released last year for Sigma, Canon, and Nikon cameras.  It is the successor to the now-discontinued Sigma 30mm F1.4 EX DC HSM, one of the most popular Sigma primes previously available for Pentax.

This lens is designed exclusively for APS-C cameras, and as such it is rather compact, measuring 2.5" long (63mm, w/o hood) and weighing in at about a pound (435g).  With a focal length of 30mm, it offers a "normal" field of view, delivers roughly the same magnification as what your eyes see.  This makes it an excellent everyday prime lens, like 50mm lenses were in the film days.  Its maximum aperture of F1.4 lets you go all out with the bokeh and means it will be a great choice for low-light photography.

As part of the Sigma Global Vision series of lenses, this new 30mm features a redesigned barrel, new optical design, rounded aperture blades, and the latest lens technologies such as HSM (silent autofocus) support for all mounts, including Pentax.  The old version of this lens did not support silent autofocus on Pentax cameras despite the "HSM" designation in its name.

According to Sigma Japan's press release, this lens will officially be released on February 26th, 2014.  We do not yet have an ETA for the US, though we are fairly confident that this lens will be priced at $499 like for other mounts.

For the full specifications of the new Sigma 30mm Art, visit its entry in our third-party lens database.  This is a very exciting lens and we will be sure to review it once it is released.  This article will be updated if we receive a confirmed ETA or pre-order link.