Adding Color to Your Studio Background

Studio photography can be very rewarding. In a controlled environment, with a willing subject, it is easy to let your creativity take control and generate wonderful images. Simple gear is all that's needed. a camera, backdrop and a few light sources are sufficient to create great images.

This article will teach you how to add a lot of punch to your picures by adding color to your background. Possibilities are nearly endless and the technique is easy.

First, we will describe the equipment needed. Then, general lights arrangement will be discussed, followed by a few words on the colored light source's positioning.

Get ready to go from here: 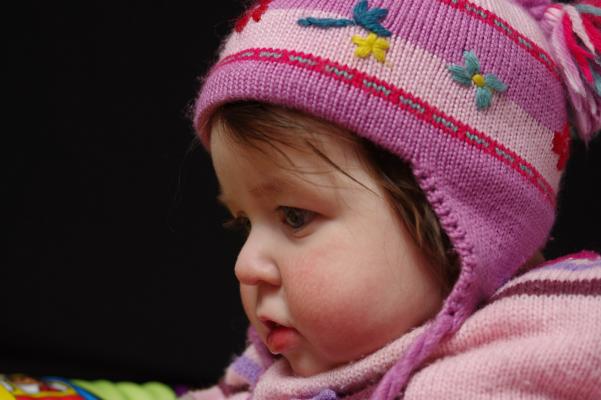 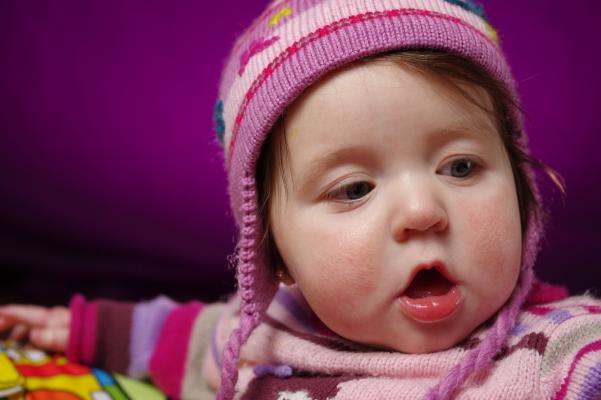 The first piece of equipment required to color your background is a dark, preferably black, backdrop. Any material will work: paper, muslin, canvas. However, in order to preserve the even texture of the background and avoid making it distracting, it is preferable to choose a wrinkles-resistant material such as paper or this kind of product or to at least stretch the cloth to remove most of the creases. A wrinkled backdrop will produce an image such as this one. 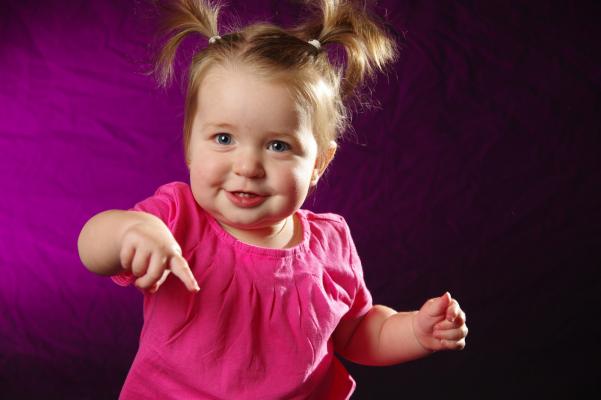 A wrinkled backdrop will be visible when lit

A dark background is required, for one simple reason: you can add brightness to a dark surface but not to an already bright surface. In other words, a white surface will show very little of the color you’re trying to add. On the other hand, a dark, ideally black, background will reflect light directly directed towards it. A gray wall of studio background will also work, but with possibly less contrasted colors.

The second piece of equipment is a light source such as a studio lamp of flash. The last is a colored filter (called “gel”) that will go in front of the light source, coloring it and adding that special touch we’re looking for. Gels come in multiple colors. Some are used to change the color output of the flash, for instance to match incandescent of halogen lights. Others are pure color filters, coming in all imaginable hues. Cokin offers a good starting kit, including many gels as well as the means to attach them to the flash head.

On the image below, the flash and gel are attached together by simply using Velcro pads. It is also possible to use light modifiers such as grids or snoots and place gels inside them for added effect. 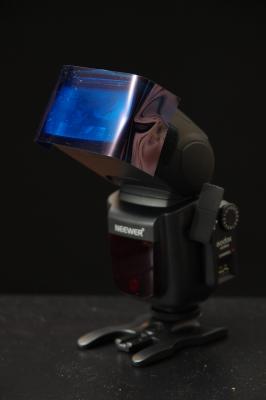 A simple gel over a flash

A studio setup can be regarded, from a lighting point of view, as consisting of three zones: foreground, mid and background. The foreground is the main light (or lights) illuminating your subject. The mid consists of key lights, enhancing specific features (for instance, a beauty dish, or small light illuminating the hair). The background is self-explanatory. It is paramount to prevent these zones from influencing each other.

In order to color the background, two things must be kept in mind at all times:

The mid lights usually pose less of a problem, since they are highly directional and often concentrated with a snoot or other light modifier. The advice given regarding the foreground light also applies to the mid.

Light from the gelled background flash can reach the subject if it is not oriented properly, as on the image below (see the hair to the left). 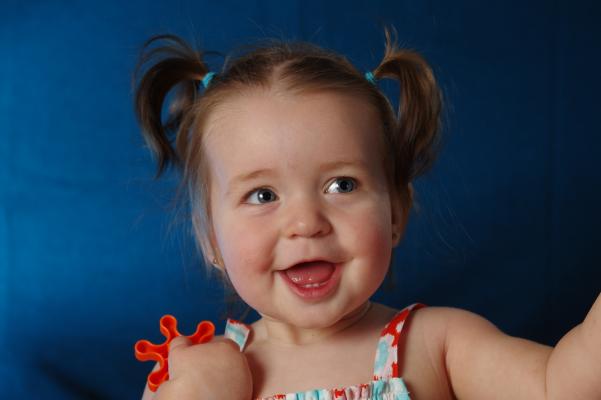 An example of color leaking towards the subject

To avoid this, direct your light more strongly towards the background or use a gobo to restrain the light diffusion (a black cardboard works wonders).

The following diagram illustrates one possible way to position the lights relative to one another in order to achieve the desired results. 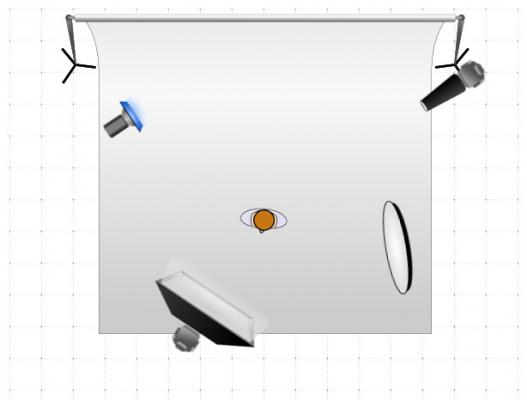 In this example, the main light is a softbox placed in front of the subject, slightly to the left of the camera (an umbrella would work too). A reflector placed to the right of the camera, sideways relative to the subject, help decrease the shadows on this side (careful not to have colored light fall on it). To the top right, another flash with a snoot directs light to the hair of the subject. Lastly, the colored light source is placed outside the frame, to the left. The next section will discuss possible ways to position that colored light for maximum effect.

Positioning of the colored light

The position of the colored light will affect the look of the background. It is possible to light the whole background evenly, or only a part of it, offering many creative opportunities.

The simplest option is to place the flash on the ground, to the side of the scene, and orient the flash head diagonally. 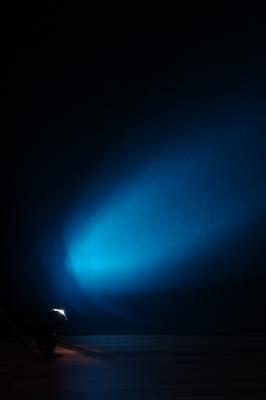 Diagonal lighting from the ground

This creates a slash of light behind your subject, as on the following pictures. Framing more closely or loosely will influence the look of your final image, as will the zoom position of the flash head (narrowing or expanding the beam). The angle of the flash relative to the background will dictate the length and brightness of the slash. Experiment!

The flash can also be raised by using a boom, to create a more horizontal slash. 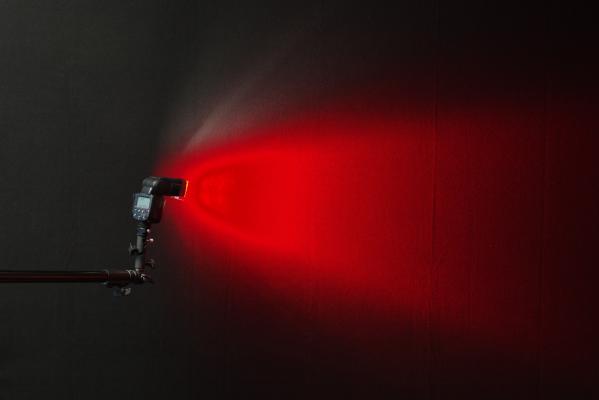 Using a snoot in this configuration allows the creation of a circular spot which can create a beautiful effect behind your subject, the circle softly fading to black.

It is also possible to place the flash on the ground, directly behind your subject, and frame accordingly to avoid seeing the light source. 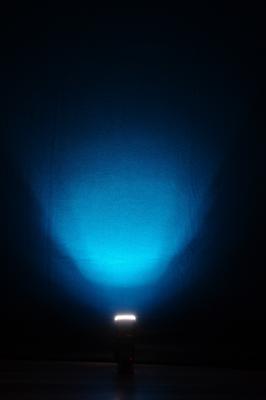 Centered flash from the ground

This will create a diffuse look and works well with subjects sitting on the ground or with kids. 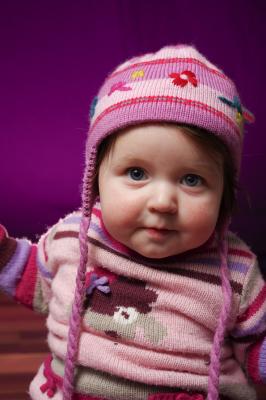 Centered flash from the ground

Combinations of light sources, with different colored gels, can produce creative results. The images below show a few possibilities, with varying angles and zoom positions. Be aware that crossing the beams with two different colors can create a third color. If the lights are bright enough, the intersection can also look almost white. Also, with a zoomed flash poorly positionned relative to the background, colored spots can appear (as on the last three images, with the red flash).

These techniques can be applied to other situations, for instance emphasizing the importance of a particular color for on-location photography.

With a little practice, it is possible to open up the possibilities and move beyond the plain black background to add color and change the mood and feeling of your pictures. Possibilities are endless, and this article includes just a few examples.