Getting ready to take pictures of the night sky 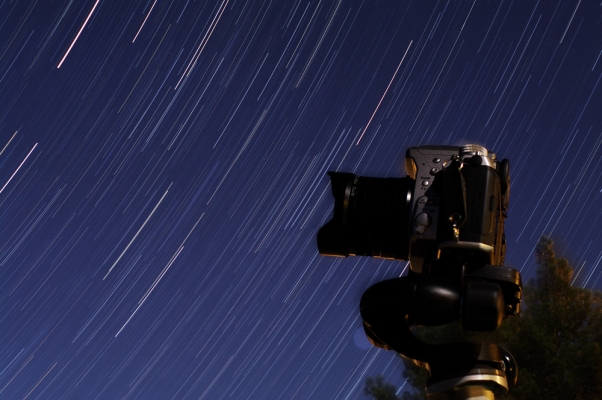 Astrophotography is one of the newest trends among photographers. High-quality digital cameras with good high-ISO performance combined with fast, high-quality optics from makers like Pentax, Samyang, and Tamron are taking astrophotography out of the enclaves of astronomers and putting it in the hands of hobbyists, too. This six-part series examines various elements of astrophotography.

This article provides you with resources, tools, and tips on how to use them to help plan your shoot. With astrophotography, planning is even more crucial than with any other shoot. In the dark, there's no room for errors.

More than at any other time in human history, resources to help plan and execute our pursuits are easy to find and readily at our fingers. Astrophotography, especially, has benefited from the Internet in terms of resource quantity, discoverability, information quality, and information detail. The list below provides some of the most useful resources you can use for planning an astrophotography image.

The above resources are great for at-home pre-planning, but what about in the field? For those of you with a smart phone, tablet, or similar device that you can take on a shoot, here are some pre-downloadable apps that work (in general) without a data connection. The offline functionality is absolutely vital if you're in a dark sky area as they typically lack cell phone service. All of these are free (for Android users, and these are all Google Play Store links.) iPhone users will have similar apps available. For a paid app, The Photographers Ephemeris also offers an app version that is stunningly well made. 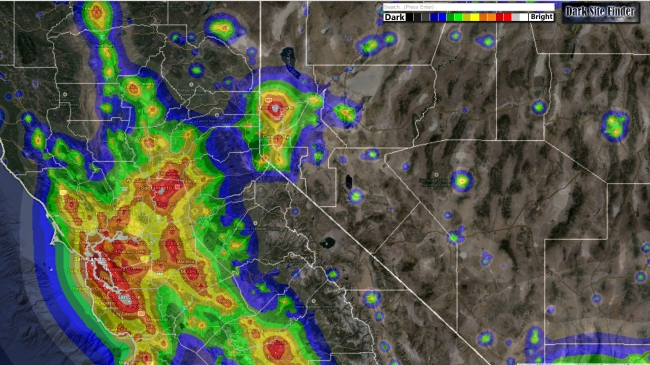 Dark sky maps provide users with vital information for planning an astrophotograph. This includes star trails, star tracking, planetary, and lunar photography. The image's top right shows the color scale. In general, dark sky maps show cities as white (because they're illuminated all the time) and dark areas away from cities as black (because the night can be fully appreciated there.) If you've already looked up your location, you may be surprised to see how light your are really is.

The color bands between white and black provide a recognizable variation in light levels. In general, an astrophotograph can be taken in any light level, and sometimes a bright area is better for a certain image objective than a dark area. If you want a detailed star tracking image of the Milky Way, you would be well suited to avoid a city. If you want a well lit foreground with some stars in the sky, a suburb or small city may be a good selection.

So let's take a look at what these light levels translate into. Here's a map of Lake Tahoe 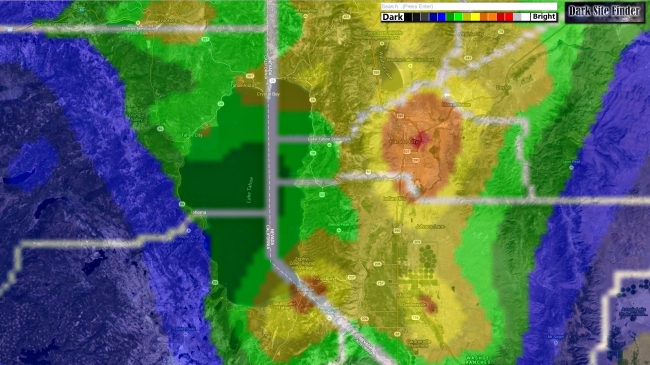 Do you see that area at the bottom of Lake Tahoe, along the shore, where it changes from orange to yellow on the left side of the yellow area? That's where I took these photos. Also, these photos were taken during a waxing moon, so there was a good amount of foreground illumination from the moon as well as South Lake Tahoe. 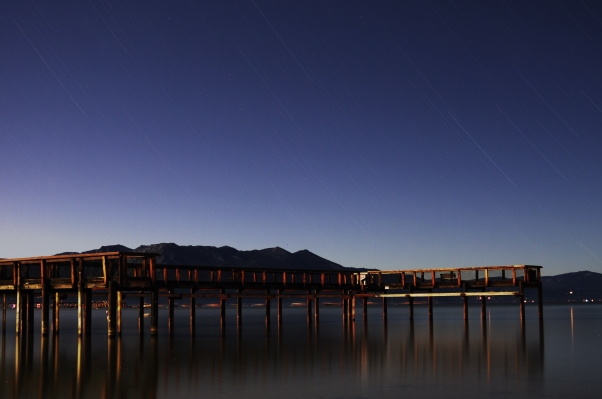 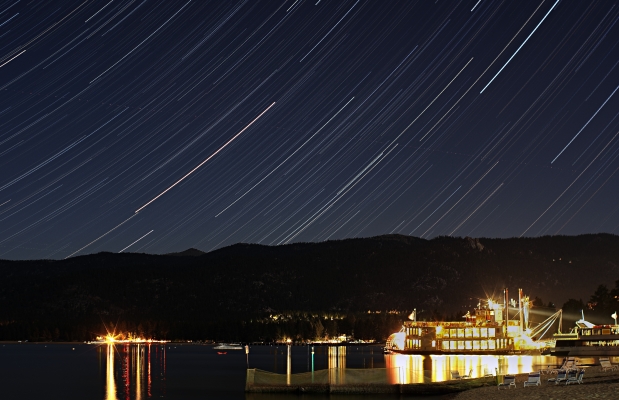 Both of those images are composites made from multiple 30-second exposures. You can see how ambient light affects the amount of stars visible in the images. These images also face opposite directions, and even though the latter faces South Lake Tahoe the K-3 benefited from being in the shadow of some large trees that blocked the city's lights. The K-7 did not have that luxury. That said, I actually like the K-7 image better (allowing for all the hot pixels left by my K-7's aging and over-used sensor.)  These images should show that light pollution, though typically a bane for astrophotography, can create nice lighting affects and help control image composition. Like all photography -- learn to control your light and your images will improve significantly.

So let's look at another example. Here's a map of Mono Lake, and yes, the dark sky overlay is on. 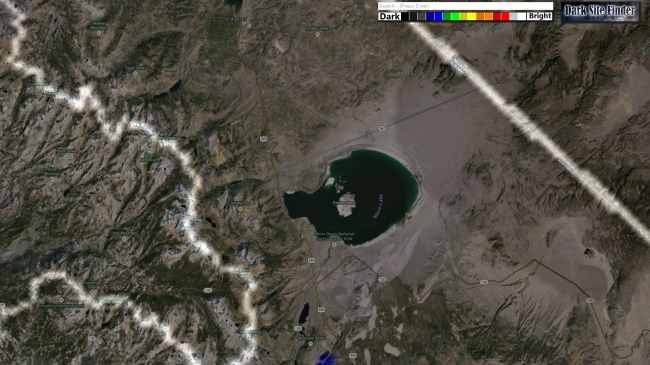 See that square-ish area on the lake's left side? These images were taken along the bottom of it about halfway between the road and where the shoreline takes a right turn southward. 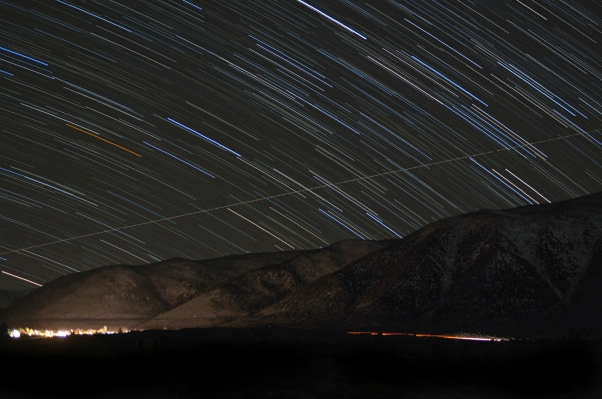 This image looks southward toward Lee Vining, a small and sleepy tourist community that, even in its slow December season, produces significant light in the otherwise black sky. The light from Lee Vining eviscerates the night. 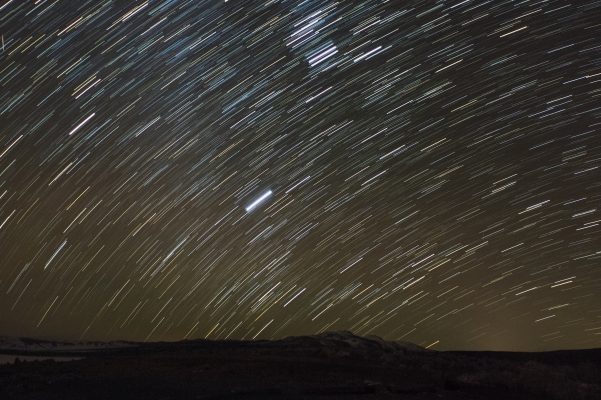 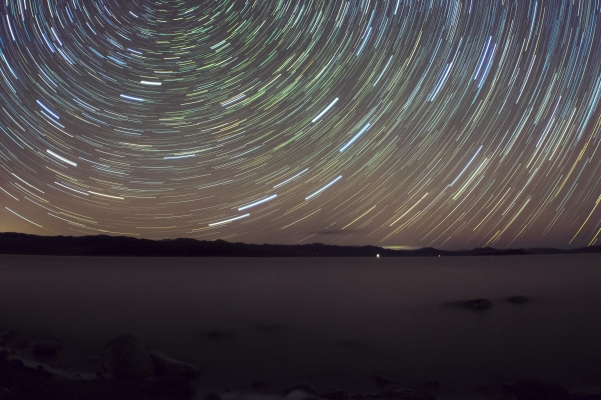 These images face East and North, respectively, and show significantly greater star detail than any of my other samples. In addition, the star coloration in the second image is not something I did but an effect of the way the atmosphere bends light.

These three shots show, dramatically, how localized light can affect images. In the first shot, I could not exceed 800 ISO without Lee Vining's light blowing out the mountains and sky to the point of unusability. Likewise, I couldn't use an ISO significantly slower than 800 if I wanted to capture meteors (which I wanted to, and which I failed at entirely.)

Of these photos, all except the boat photo resulted from pre-planning I had done with dark sky maps and Google Earth.

To install these, download the files that you need and copy them to your Google Earth folder (C:\Programs (x86)\Google\Google Earth\ on Windows). This specific folder isn't required, but it places the files in a safe place to prevent accidental deletion.

If you only download one file, double-click it and then wait until the file opens in Google Earth (this can take a few minutes). After it opens, find the Temporary Place shortcut on the left and drag it into your My Places folder above Temporary Places. This saves the map and you can turn it on and off by checking and unchecking the box next to it. You can use this to select a very precise photo location in Google Earth and then verify that it has a low-enough light level for your intended photo.

Using Google Earth and Bing! Maps to Plan a Shoot

By far and away, Google Earth is the most useful tool in an astrophotographer's online toolkit. This video shows how to use Google Earth and some nifty tricks that will help you improve your astrophotograpghy planning. Using Google Earth, you can virtually visit a site, pan and tilt from a ground-level view, and get a good idea of how to frame your photo in advance. With the Panoramio tie-in, you can see photos other people have taken at that location. With Street view (in some countries,) you can see what a near-ground-level view looks like.

An alternative to Google Earth is Bing! Maps. Bing! has, in many cases, more updated aerial imagery than Google Earth. Also, Bing has a feature that allows users to view some sites from multiple bird's-eye angles. Bing!, however, lacks many of the interface elements like Panoramio and Street View that make Google Earth such a powerful tool for photographers.

If you've never planned an image before, this is a good time to start. Arriving at a near-black site with no pre-made plans will significantly complicate your shoot. Here are two Rule of Thirds grids I developed for the 4:3 (APS-C) and 3:2 (35mm) aspect ratios. In addition, I developed a set of PDF files with various framing options: Rule of Thirds, Quadrants, Diagonals, Triangles, and Golden Ratio Grid.

Here's a link to the A4 Guides in PDF.

Here's a link to the U.S. Letter Guides in PDF.

Both can be downloaded free for users. Below are the most useful grids, the 3:2 aspect ratio Rule of Thirds grids. These are well suited for use in your photo editing program. 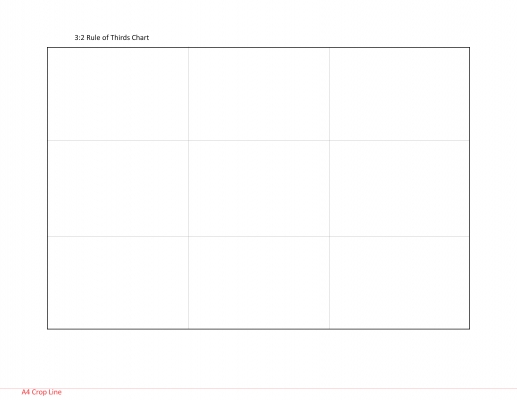 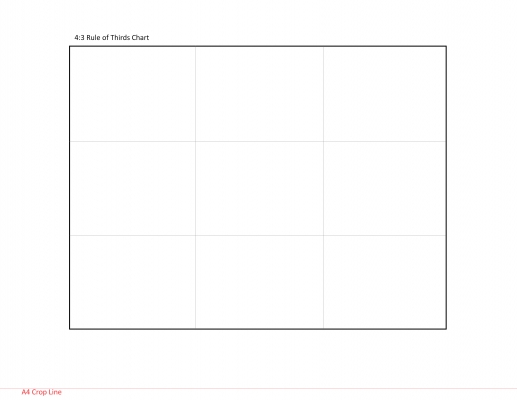 These images are sized to print 100% at 300 DPI on U.S. letter paper. If you use A4, simply crop the image along the red line and resize to your paper size. The proportions will balance out properly. Click on the images to be taken to a full-size version that is free for anyone to download and use. If you've never tried to compose an image before with layouts other than the rule of thirds, here's a playlist of videos that shows how to use the various composition grids.

Any time you plan to take a photo at a site overnight, be sure that you have permission. The U.S. has a lot of public land, especially in the West, that can be used any time of the day or night, and often for free. Other times, you may need to pay to camp at a site overnight, pay for a site use permit, or other fee. It's worth looking into the fees and permits first by finding out who controls or owns a potential site and contacting them. Paying a small fee for use, a campsite, or hotel room is much easier than paying a fine or being arrested for trespassing.

Remember to be safe when you do take your shoot. The next article in this series, Equipment Selection, looks at the photographic and technology-related equipment that can help you achieve the image you want to take. It also looks at some basic safety equipment that you'll want to take.

A How-To for Black and White Photography