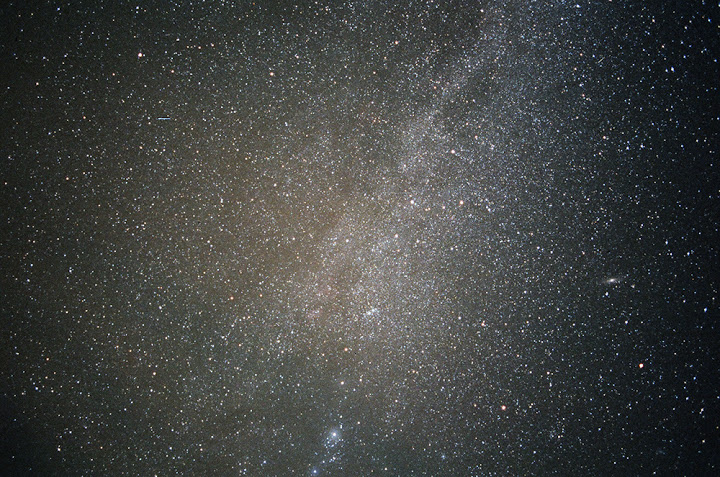 An entire generation of photographers, now, has had the opportunity to capture high-quality images without using film, learning the difficulties associated with it, and adjusting for film's peculiar requirements. This installment in the astronomical photography article series looks at using film for astronomical imagery. We'll evaluate uses, challenges, and provide a list of pros and cons. If you've ever wanted to try film for astronomical photography, there are some limitations, but overcoming them is highly rewarding.

If you don't own a film camera, Pentax Forums has a great Marketplace where you can pick up an old film body. Amazon, eBay, and KEH also sell used cameras; KEH being the most reliable source. Also, if you need film, B&H and Adorama sell film (and if you click through from Pentax Forums, you get Marketplace access and support our community.) One last item you'll need is a sturdy tripod, and you can review recommendations in the Astrophotography Equipment Guide. The guide also suggests various film bodies that work well for overnight use. 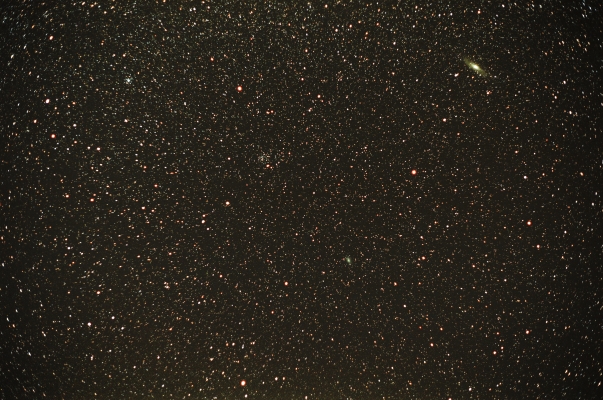 Some specialty films can be used to take astronomical images. The number of films that remain is small, but fortunately some common professional film options truly stand out as fantastic choices. Film has some advantages over digital images: namely, cost. Because the film camera can be completely passive, and no meter is needed, a purely mechanical camera will do well for film imagery. This places the camera cost of entry at as low as $5 for an old Spotmatic, S/H series body, or other all-mechanical camera. And, because the film body can be very old, the lenses can be found inexpensively as well. An old 50mm f/1.4 Takumar in M42 mount, Takumar 35mm f/2.3, or a third-party M42 28mm f/2.8 are good options for use on mechanical film bodies. Many old and fast M42 lenses can be had for less than $30. Adding in a decent tripod, a film set up can be less than $100 to get started.

But film has some drawbacks. A key one that appears in many of these images is exaggerated vignetting. If your lens is prone to light loss to begin with, extended-duration images amplify this because of reciprocity failure (discussed later) and the light-loss areas receiving fewer photons than the image center. This, especially with wide-angle lenses, results in exaggerated vignetting. 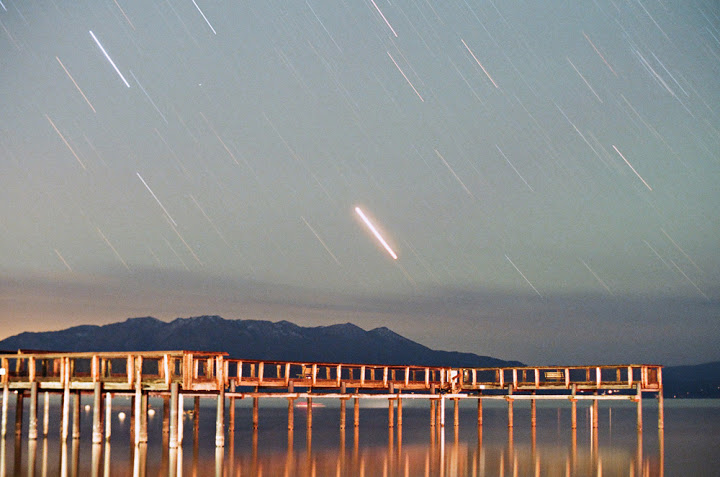 So film is well suited to stationary subjects, especially star trails (which is why many of the images in this article are star trails.) Overnight star trails and even long-exposure cloud photography are two good subjects for film work, especially for your first endeavors into film-based astrophotography.

Film has another major advantage, though. It's less sensitive to flaws in image capture than digital. If you can calibrate an astrotracker correctly, then a long-exposure film shot, like the 15-minute exposure below or the thirty-minute exposure captured with a 135mm lens (shared elsewhere in this article), appears somewhat sharper than digital images of the same scene and exposure duration. The reason has to do with reciprocity failure. The film will record the areas where the stars are the brightest for the longest. Small variations due to camera movement or very minor astrotracker calibrations errors are forgiven on film when they would not be on digital. Each commercial astrotracking system tested for this article series indicated that film shots could be accurately tracked for up to twice as long as digital shots, or longer. 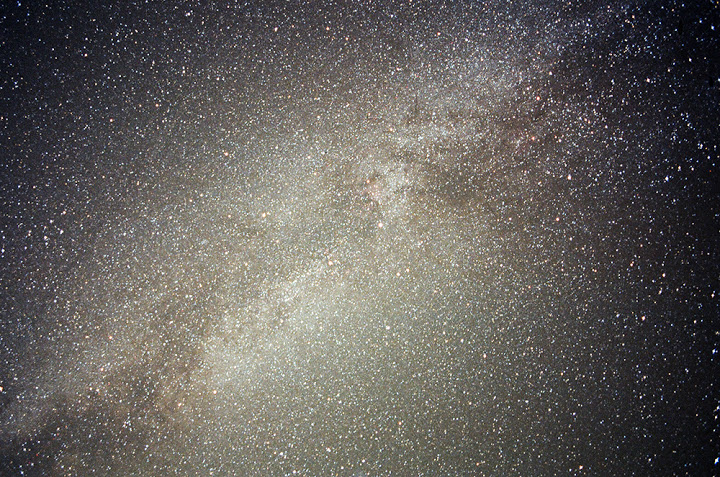 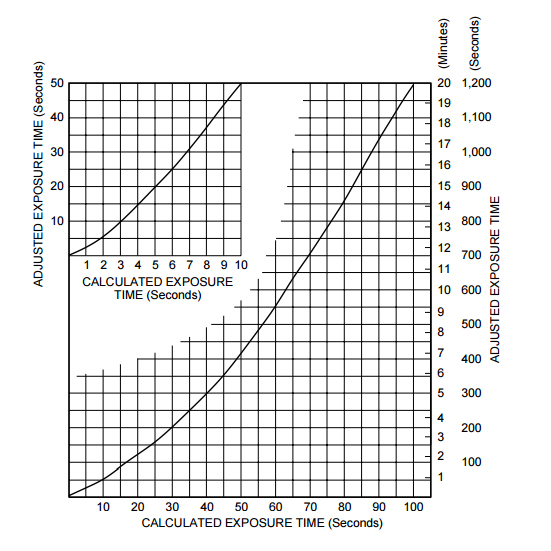 Once an exposure time exceeds one second, for most films, that relationship begins to fail. Most film makers provide charts, like the above, to help photographers compensate for the end of the straight-line exposure relationship.

Films differ. Fuji Acros needs no compensation to 120 seconds and then only a half-stop from 121 to 1,000 seconds. Fuji Natura 1600 reportedly needs no time compensation for long images (but it will benefit from using a slightly larger aperture on astronomical images.) 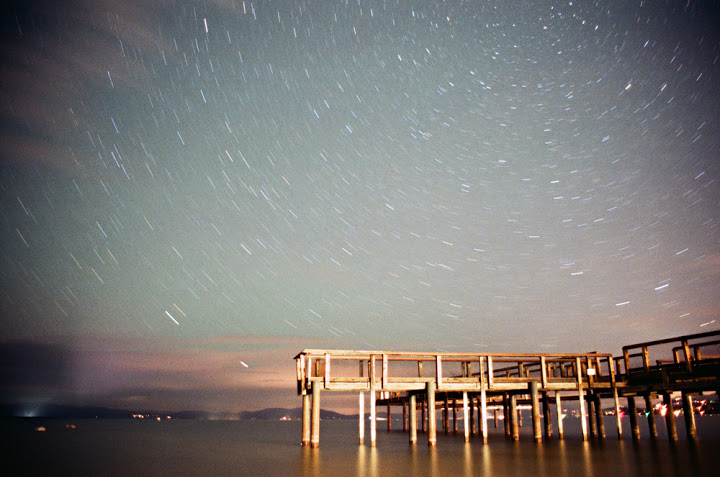 This article series involved testing a number of films, color and black and white, for astronomical and overnight images. One of the best is Fuji Natura 1600. The film is hard to find outside of Japan and requires special importing to the U.S. ten-or-so rolls at a time to make it affordable. Obtaining the film in Europe could also be challenging, but Japanese sellers on Amazon and eBay typically export the film reliably. Fuji Natura 1600 is a film that works very well for overnight work and many images in this article are taken with Natura.

Kodak Tri-X 400 is the most durable film on the market today, black and white or color, in terms of exposure latitude and tolerance for developing errors. I've pulled it to ISO 50 and pushed it to 6400. As a general rule, it works well to ISO 3200. Depending on your situation, you can use Tri-X 400 at any pushed sensitivity up to 3200 for overnight work and receive decent results. Even at ISO 400, Tri-X delivers lots of bright star trails balanced against foregrounds which don't suffer from highlight blow-out. Tri-X 400 truly shines as a medium-format film and Pentax 645 and 6X7 users will benefit greatly from using Tri-X for astronomical images.

In a nutshell, probably not. Hypersensitizing film is a process by which the film is placed into a vacuum chamber and the vacuum is run until it achieves full vacuum. This removes the water from the film's emulsion, and water is culprit behind reciprocity failure. In a vacuum, the water in the film's emulsion sublimates immediately to gas, so there's no risk of the emulsion sticking to itself or remnant water dripping into your camera after this process.

After creating the vacuum, the vacuum is replaced with nitrogen gas. The nitrogen infiltrates the emulsion and causes it to be sensitive at significantly higher ISO ranges than the original film. 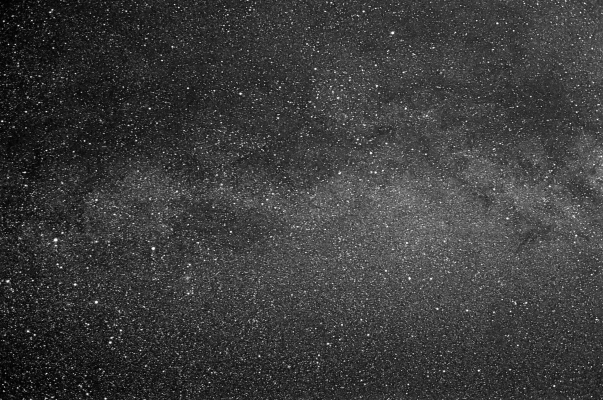 This has some drawbacks. Firstly, safety: If you don't have a proper vacuum chamber, there's a significant risk of injury. Secondly, cost: Light-proof vacuum chambers are not something that most people have in their closet, sitting in the back under an old coat. Thirdly, maximizing usability: To really make the most of hypersensitized film, which loses a lot of dynamic range and image quality, you'd want to use is in a sheet film format. Maximizing a sheet film for astrophotography also means having a special camera, and a vacuum chamber that somehow allows you to remove sheet film from its bag and box in pitch black. Hypersensitized films work best in dry-ice chilled cold cameras with vacuum film backs to ensure film flatness. Again, that's not an item most people have in their closets.

Lastly: Hypersensitized film has to be used and developed quickly. So, in an ideal world, you'd have a travel-ready hypersensitizing kit that you can take to your base camp, use before the sun sets, use the film that night for photos, and then go home to develop the negatives. 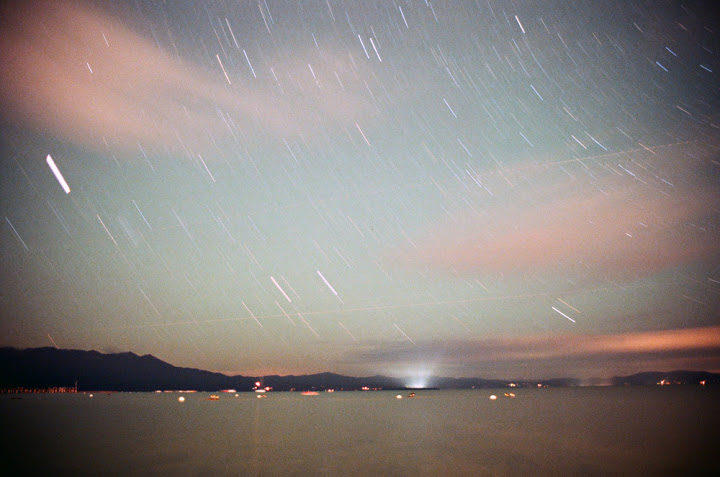 In short, hyper sensitization is not worth the trouble for modern film photographers. Using a high-speed emulsion like Fuji Natura 1600, Kodak Portra 800, or Korak Tri-X 400 pushed to 1600 or 3200 will deliver high-quality results.

Color or Black and White?

Astronomical work is one of those types of work that really benefits from color images. Black and white images, because of the dark sky, can look like negatives. The following two images present similar photos taken with Fuji Acros 100 and Fuji Natura 1600. The top photo looks like a negative, but it's not. The water wheel in the image has a light shining on it, as does the tree. 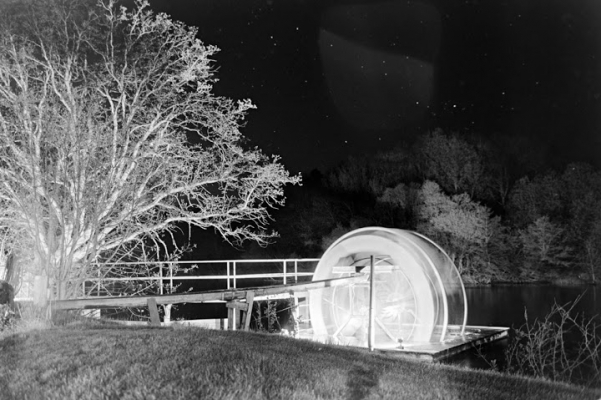 This image of some beach houses shows how color is recorded on Fuji Natura at around midnight. The skies don't remain purely black, but there is suitable contrast for stars to appear. 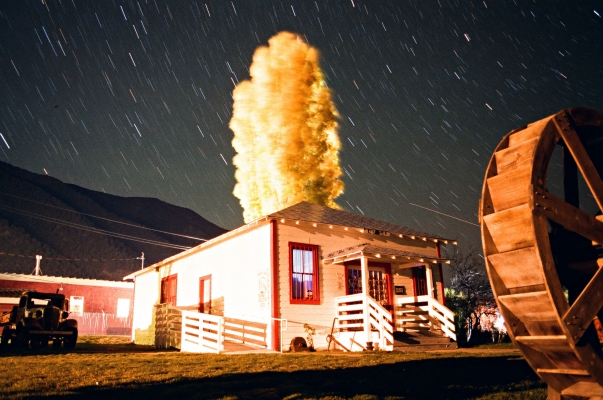 Film photography has some significant pro points and some significant con points. Ultimately, if you elect to shoot film over digital for some images, there are good reasons and a lot of challenges ahead. To help evaluate if venturing into film for astronomical photography is an option for you, here's a pro and con list. Please add your own pro and con items in the comments.

Whether you want to try astronomical photography or overnight imagery with film is a decision you can best make for yourself. It's certainly worth giving a go if you have a film body and a camera. It's also a challenge and a lot of fun when an image turns out well. 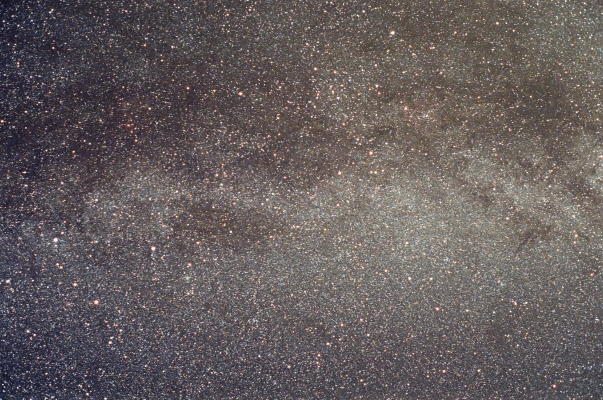