A behind the scenes look at this complex image

Many of you may remember the below cover image from the 4-Lens Ultra Wide Angle Showdown between the Pentax DA 10-17, Sigma 8-16, Rokinon 8mm FE, and Rokinon 10mm, our most comprehensive lens comparison review to date: 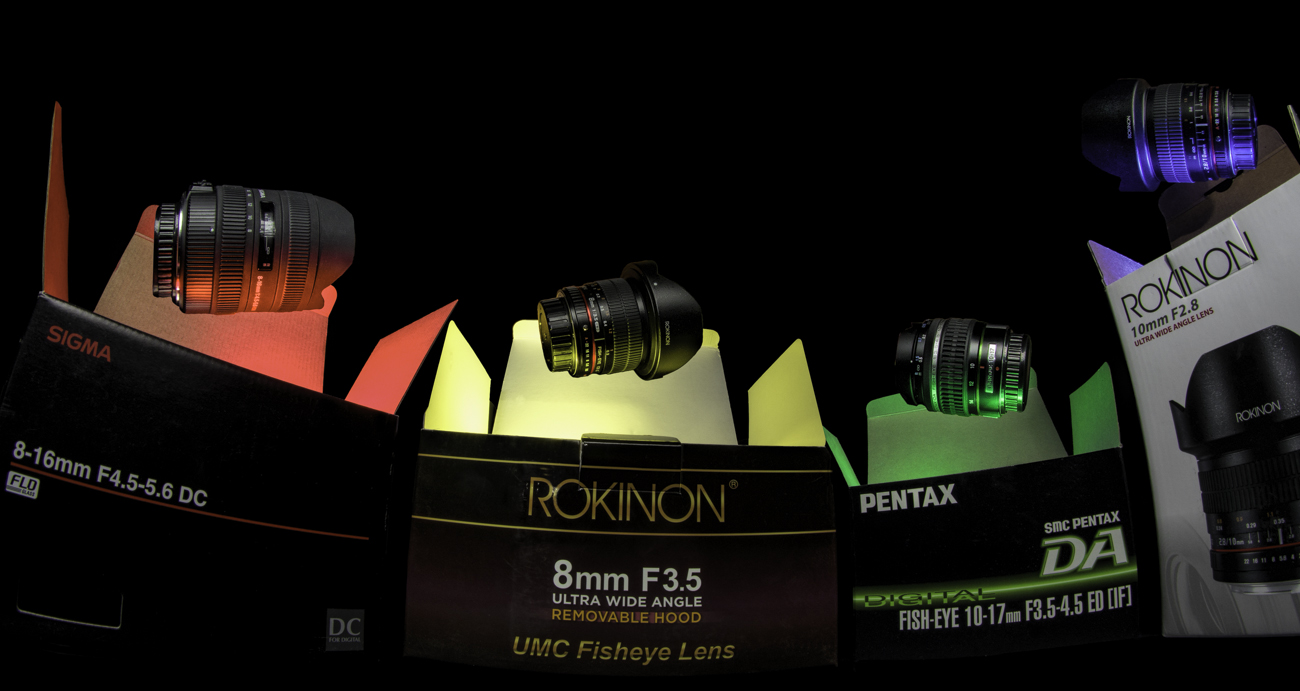 Click on the image above, and all the following images, to view an enlargement.

Ever wonder how it was made? Well wonder no more, as this post goes into a detailed reflection on all the pieces to this puzzle!

Second, the impetus behind this project has been a personal one - for every lens review I've authored for Pentax Forums it has been a personal goal to challenge myself with a unique, eye-catching, and technically challenging signature photo. Here are some examples of previous attempts and their BTS articles (except the HD 55-300, which did not have one produced):

I had already taken a standard product shot of all the lenses on top of their boxes for the UWA review (below left), however it was too "bland" for me. The one thing always in the back of my mind was to make a cover photo that likewise captured the same extreme feel only ultra-wide angle lenses can give. Building on lessons learned, especially from the last two, I combined the mid-air suspension and the use of gels to arrive at the one on the right, which was by far the most challenging attempt yet:

The key was to shoot the entire series using an UWA lens, which led to the Rokinon 8mm FE lens being chosen. Then, the boxes were arranged: 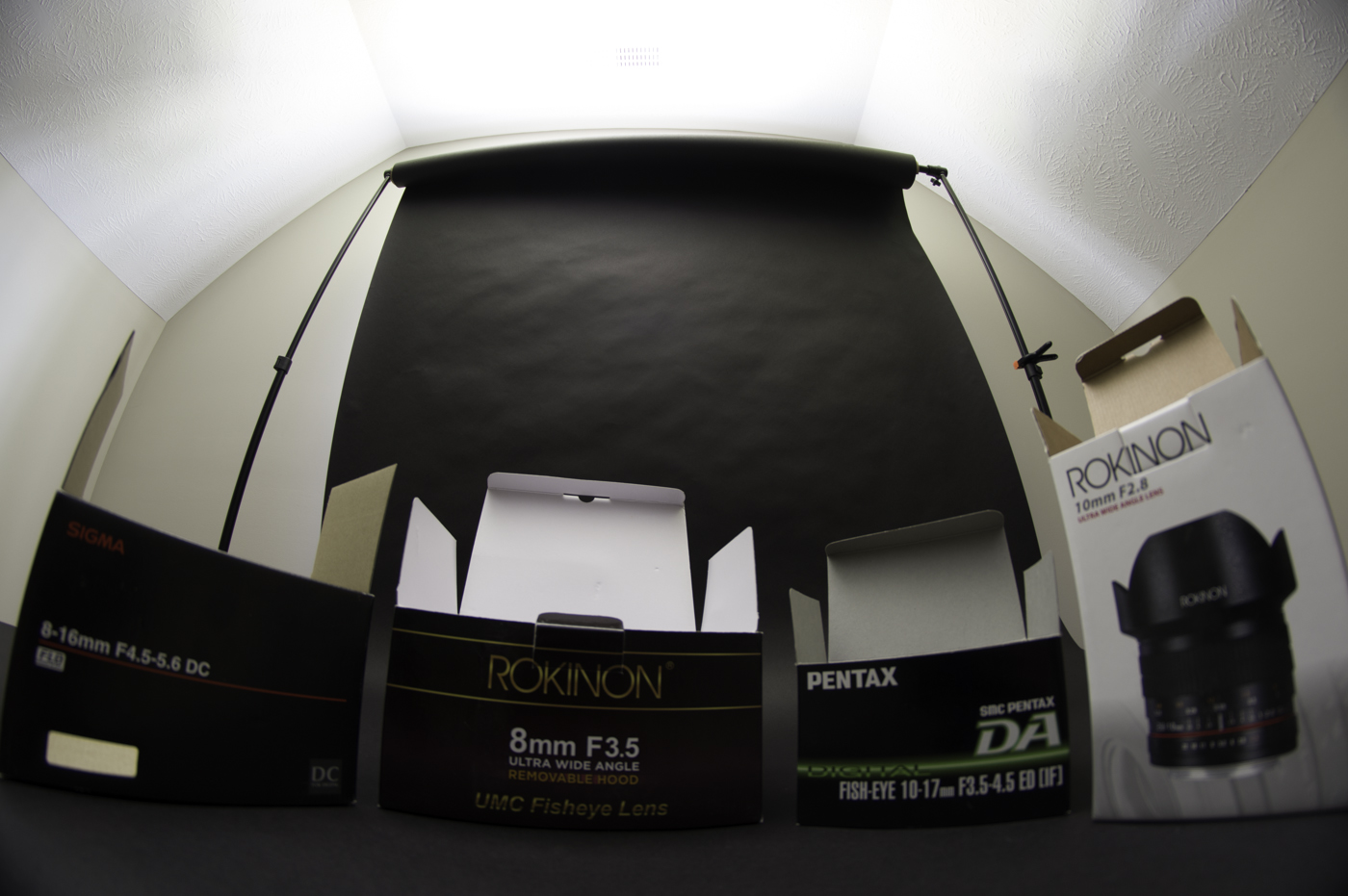 Lighting was next, as I wanted to wash out the background to as black as possible. An umbrella didn't allow for even illumination across all the boxes (and I didn't have the room in my small studio to set up my other, much larger, umbrella), however a stripbox did the trick!

A quick readjustment of the stripbox a little further back, and voila: 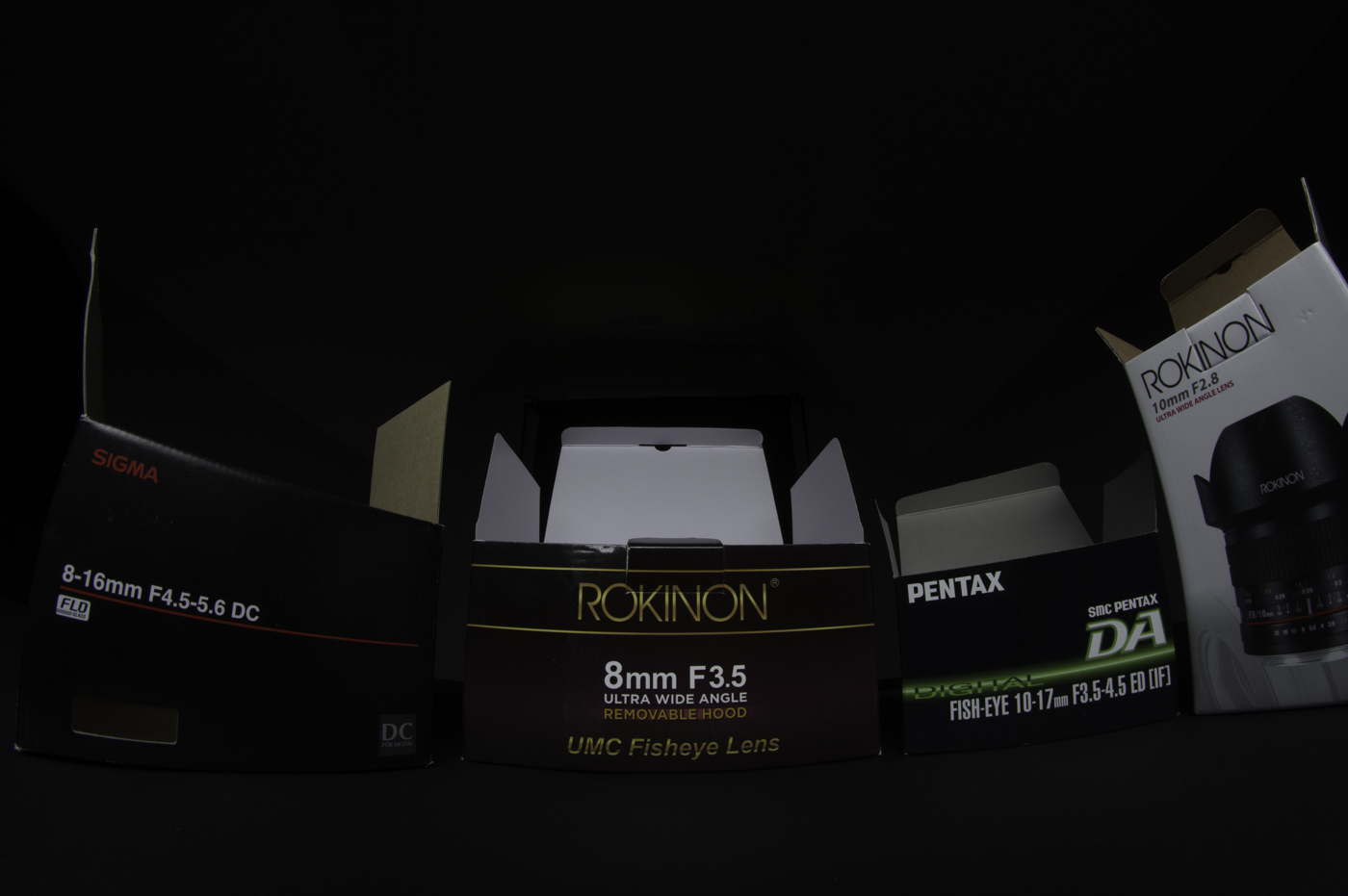 The next step was figuring out how to suspend the lenses over their boxes. Trying both a one-handed and then a two-handed approach, neither minimized the amount of fingers needing to be cloned out. If necessity is the mother of all invention, the paperclip molded to have a finger loop and (carefully!) hooked into the lens mount was the resulting child: 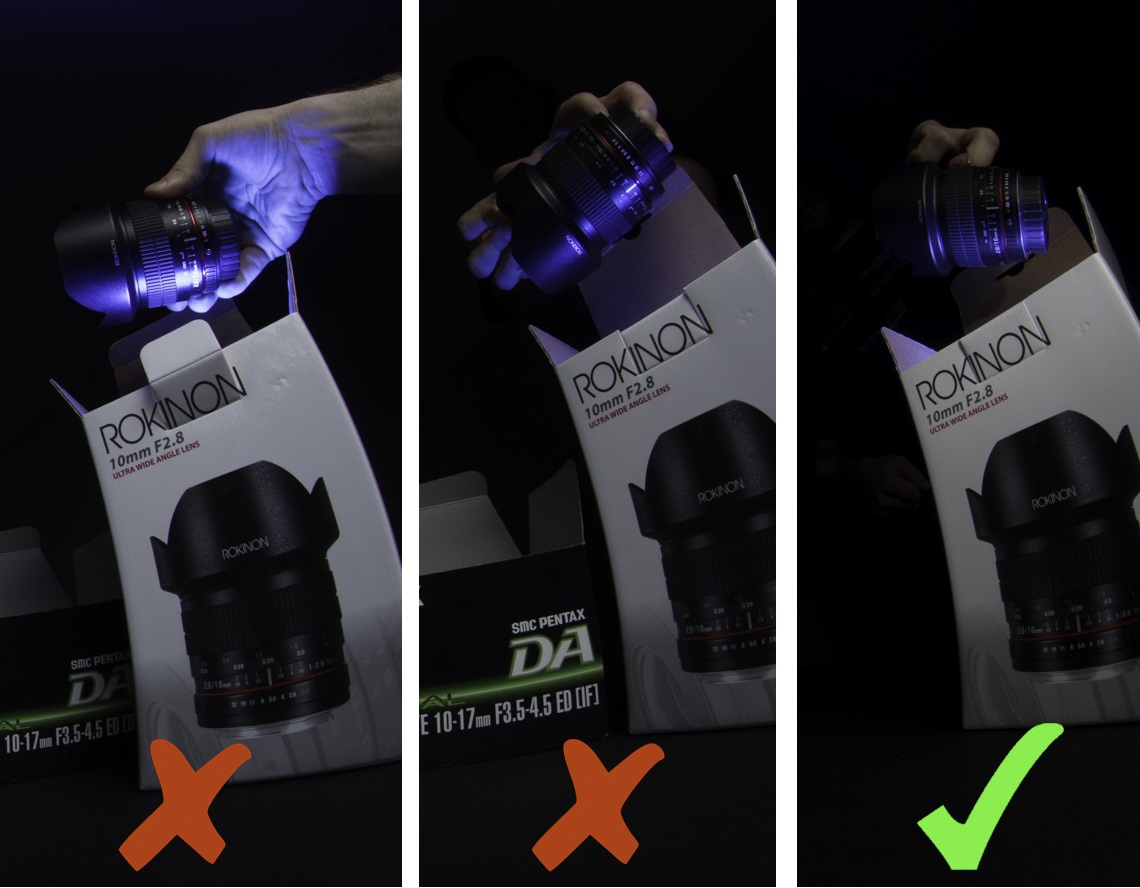 Once the technique was down, it was on to the next lens, which required two shots to get right because I couldn't get that left flap to angle properly. The next shot was of my finger holding it at the proper degree from behind the box. Grab the green slider below to see both images that were simply layered together in Photoshop Elements: 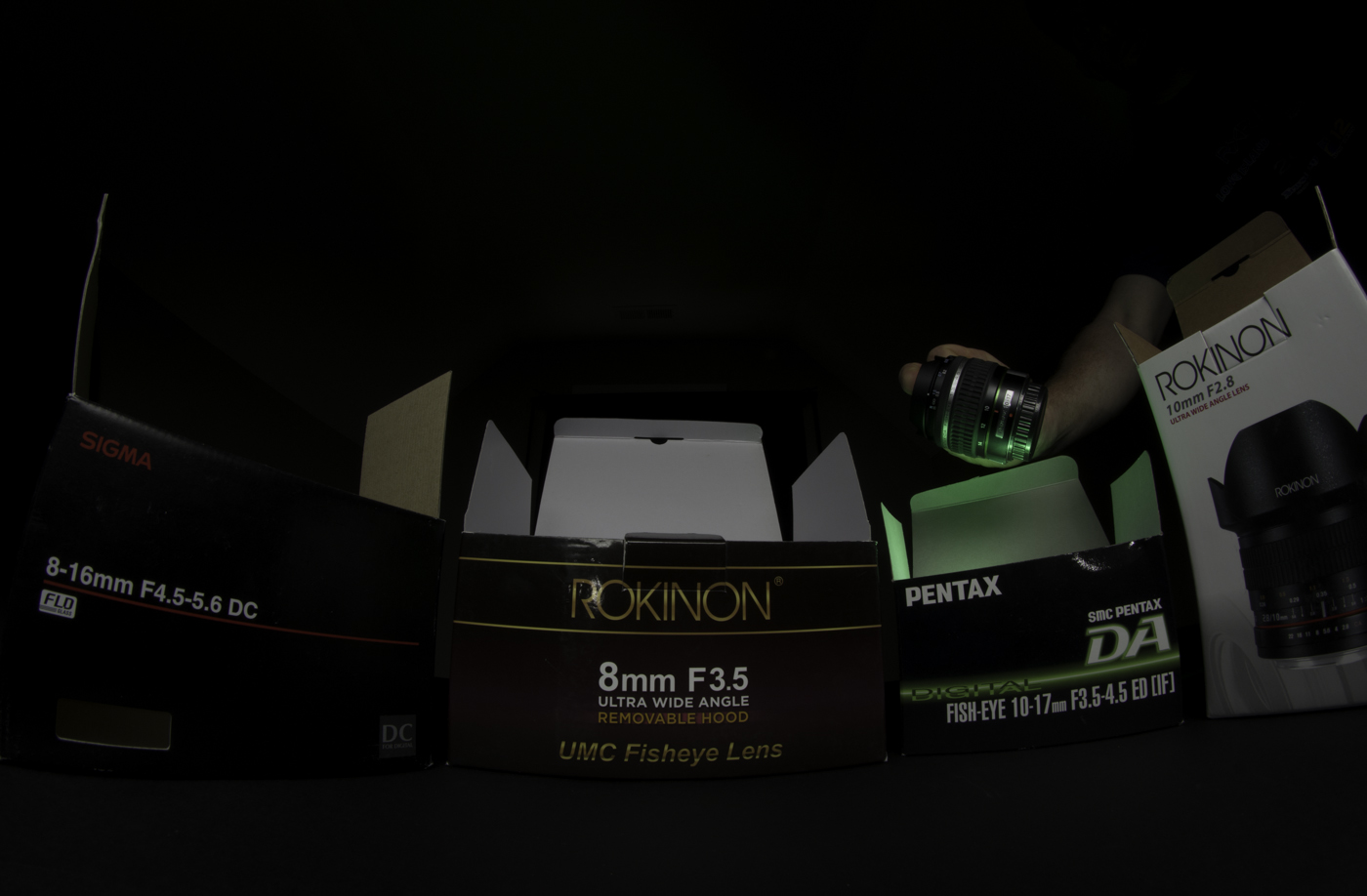 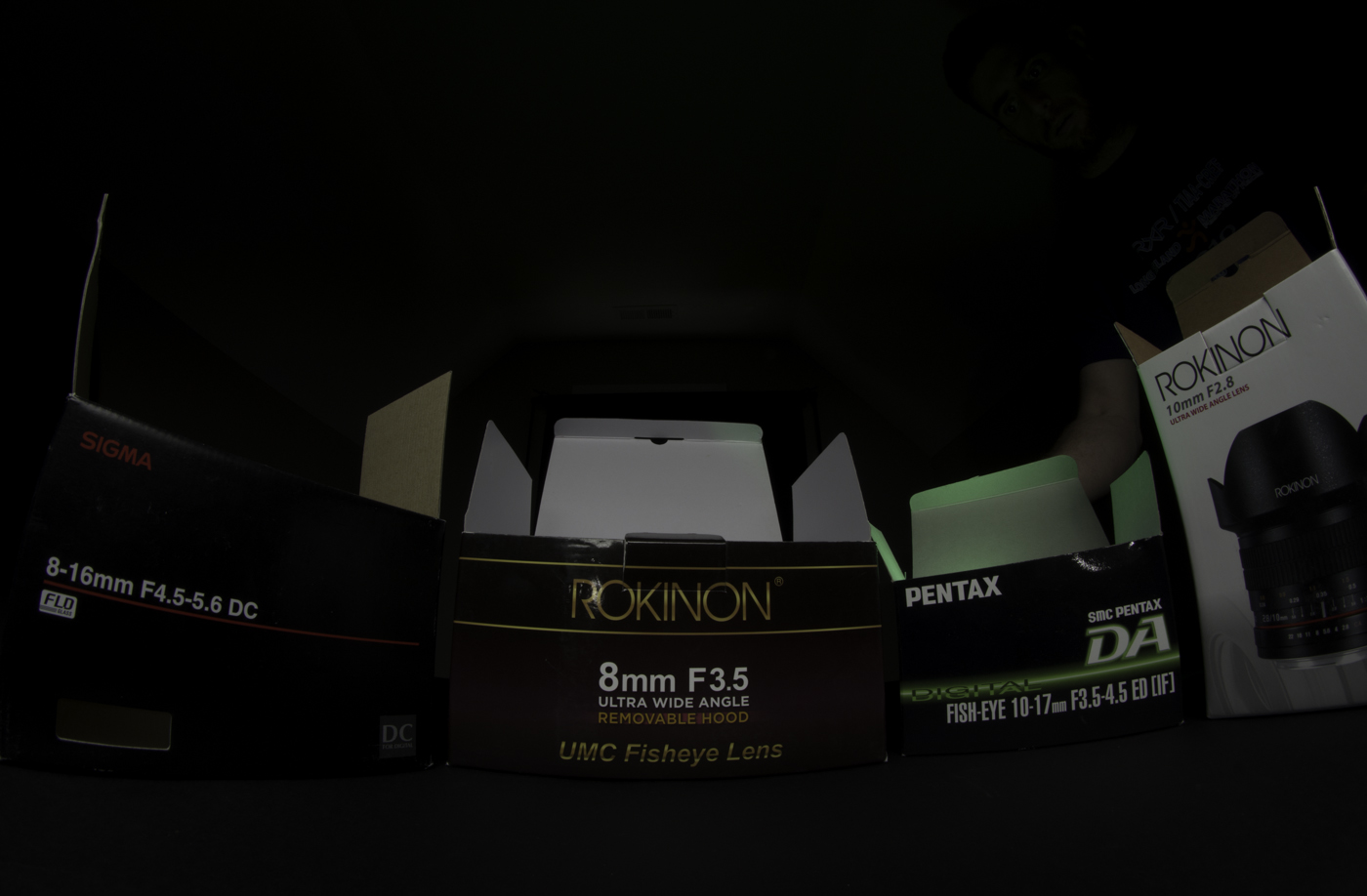 Skipping over the Rokinon, we went to the far left and shot the UWA zoom lens. This one also required two takes because the back flap got in the way of holding the heavy and large lens over its box. Just like above, the two layers were combined in PSE: 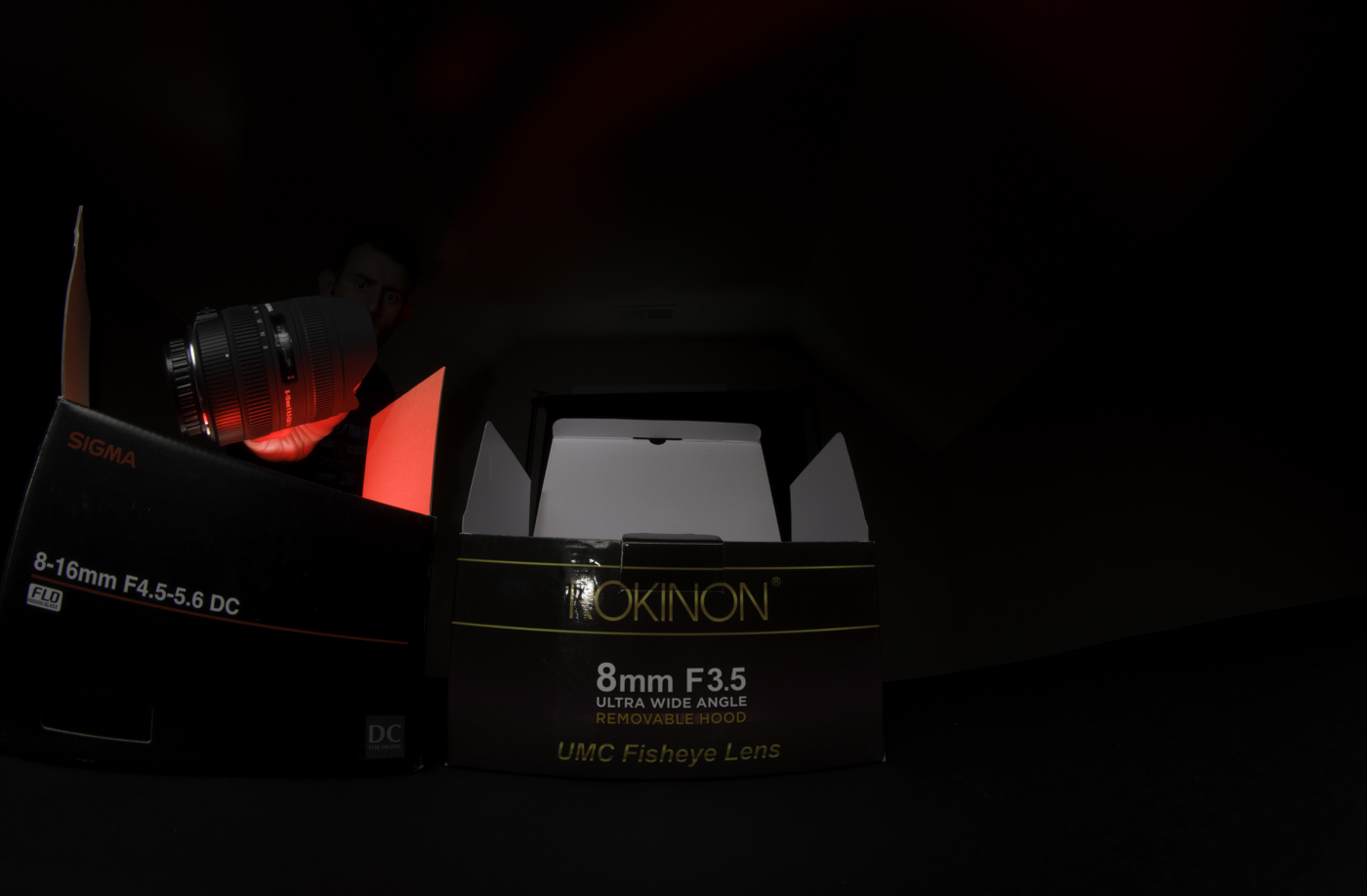 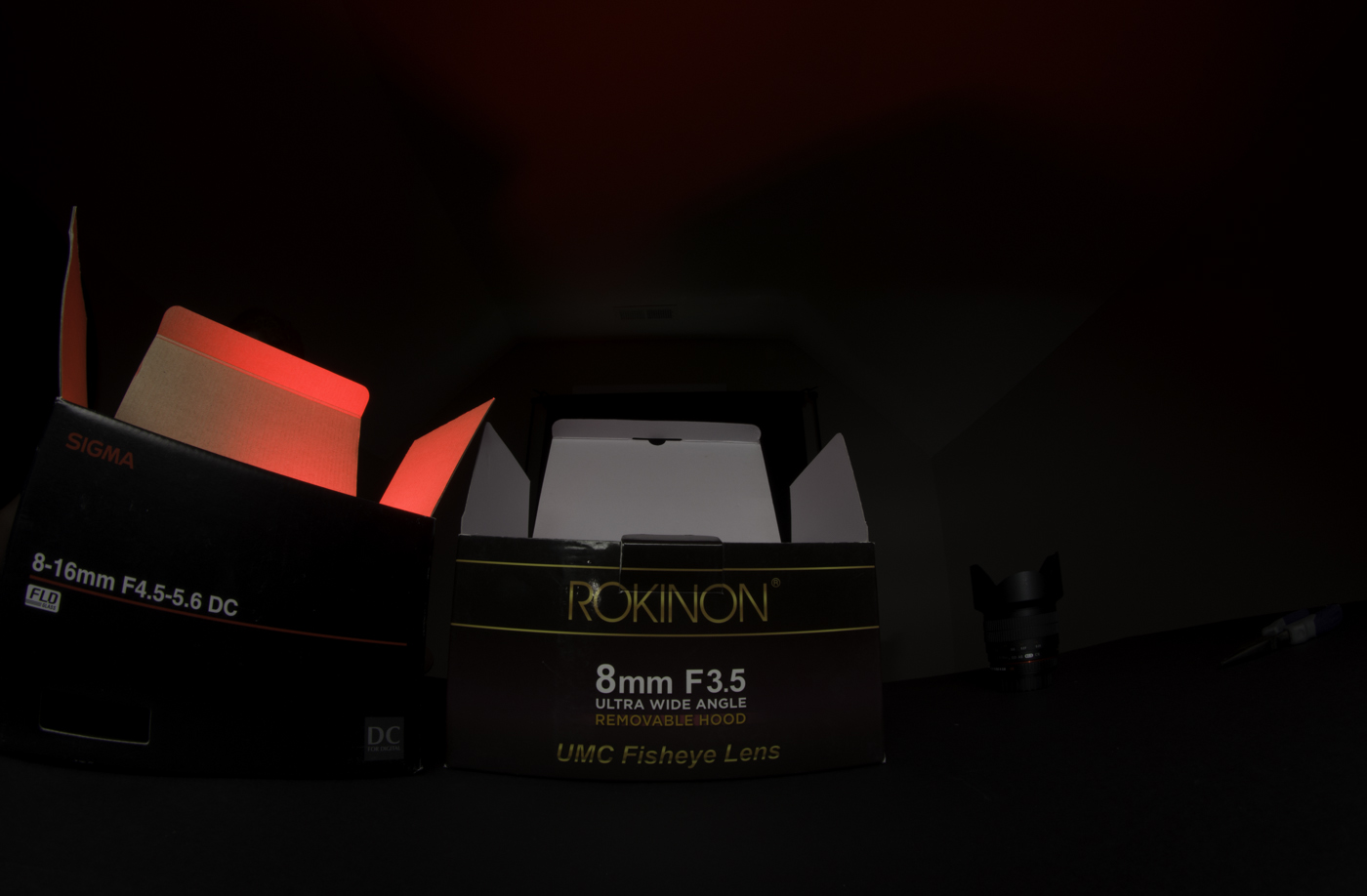 Another thing I started doing was taking the boxes away after I was done with those lenses as I found it just easier to not have to worry about not bumping them and causing misalignments, which brings us to the final box: 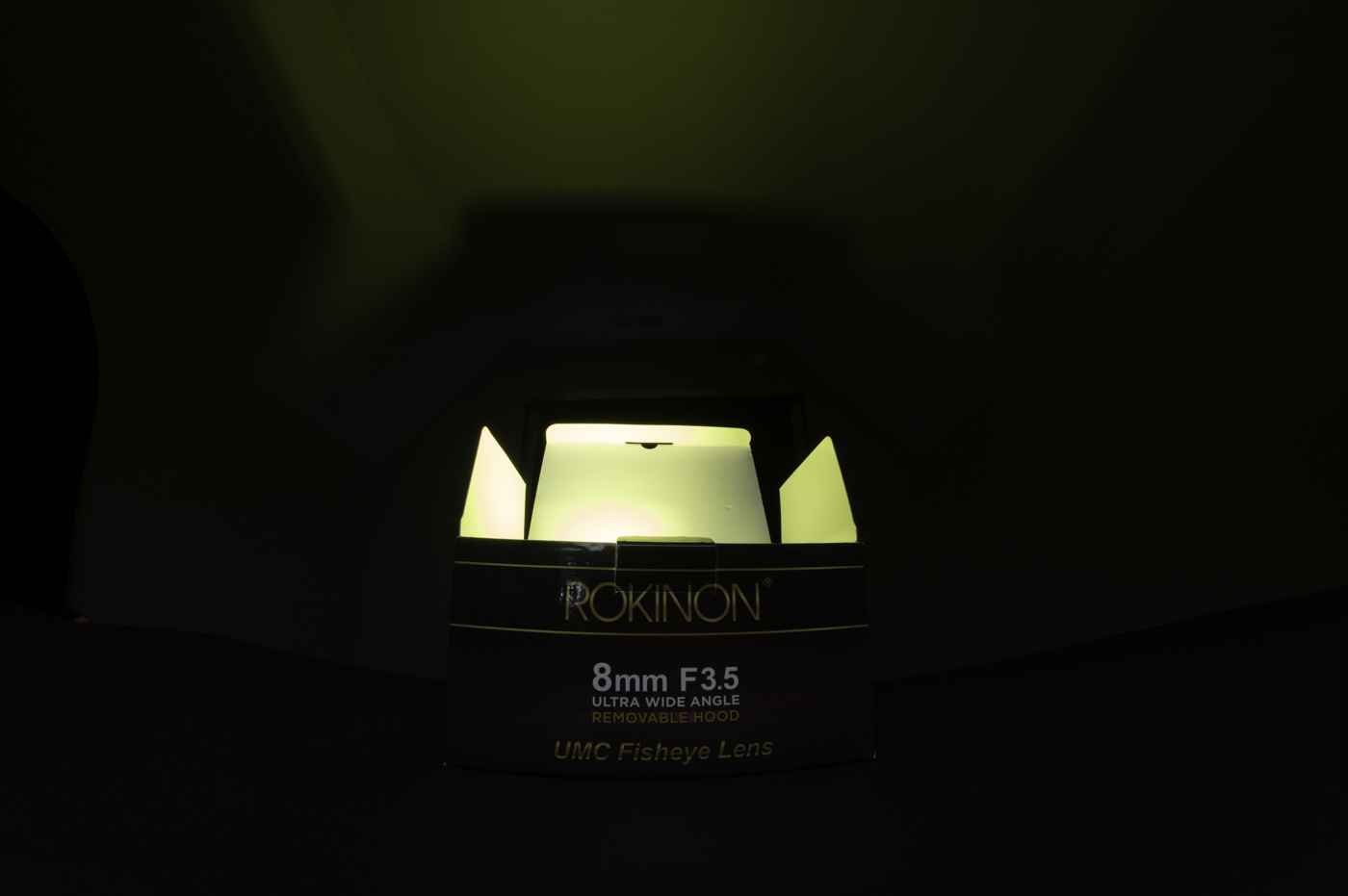 As soon as the above image was complete, it hit me - how am I going to photograph the lens that goes above that box if it's mounted to the camera? Sure, I could acquire another copy of the lens, but that would require actually buying one and waiting a few days for it to arrive. Using the other fisheye would make for a jarring difference because they are two different fisheyes and different focal lengths. And then I remembered something I discovered a few days prior as a result of the review's analysis: the 8mm lenses (Sigma 8-16mm and Rokinon 8mm FE) and the 10mm lenses (Pentax 10-17mm FE and Rokinon 10mm) each shared the same magnification in the center at the same focal lengths despite the edges looking vastly different as a result of rectilinear vs fisheye distortions (this page does a very comprehensive job at explaining the phenomenon with many sample comparisons). So I mounted the Sigma zoom and placed the fisheye prime in the center of the image to finish out the series: 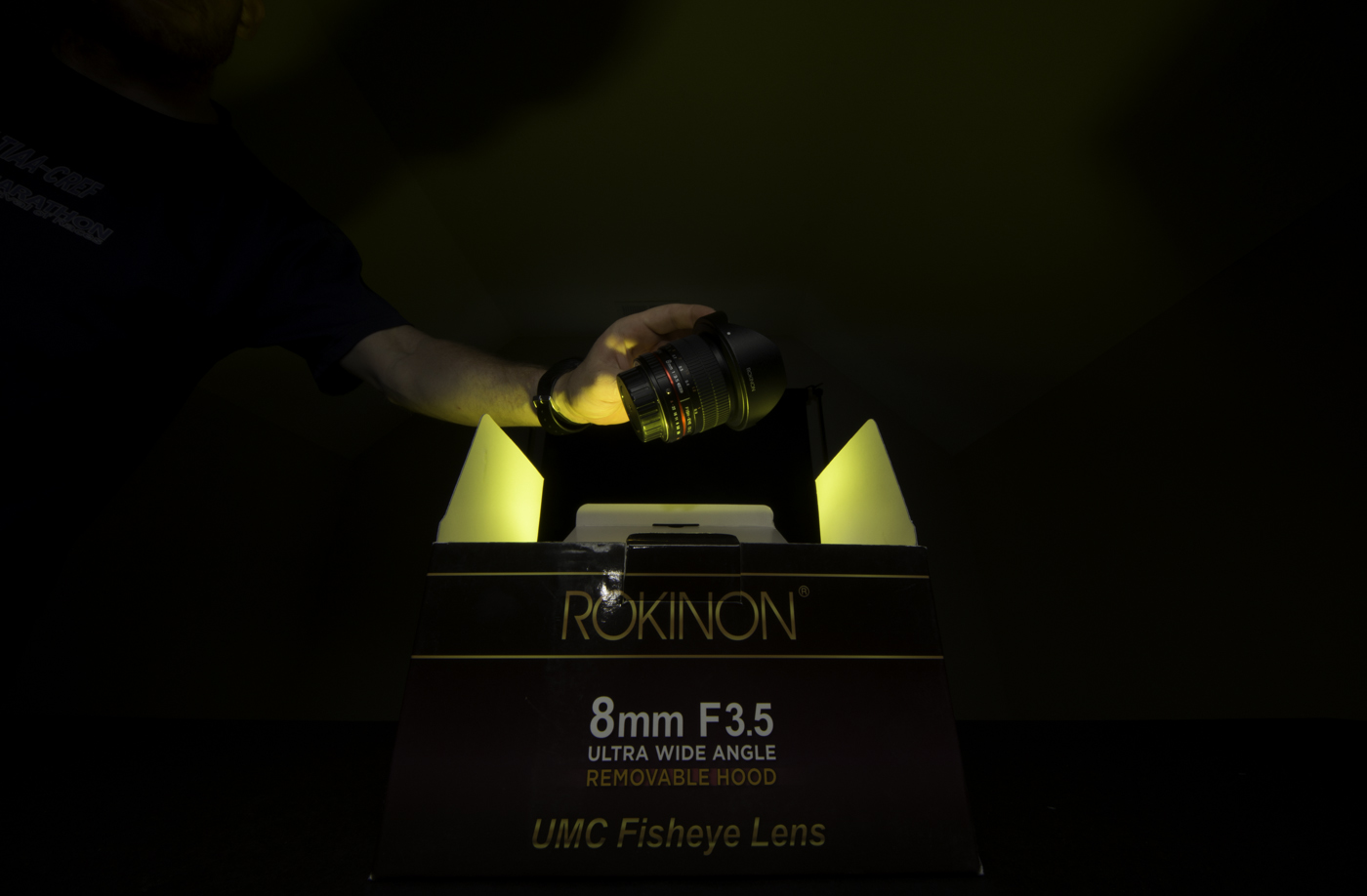 After some slight tweaks and editing in post to add a little punch, all the pieces came together like this, with only the Rokinon prime and its accompanying box to the far right being shot in one frame:

Here's two BTS shots, first showing the entire layout of the spare bedroom above the garage my wife seems to not know exists studio, with the two lightsources behind the camera:

The stripbox has one Cactus RF-60 speedlight and there's another clamped to the light stand with a honeycomb grid to narrow its beam. On top of the Pentax K-3 is a Cactus V6 transceiver to control and trigger both flashes.

Also, you are looking at that correctly - the clamp with a small ballhead is screwed directly into the side of the flash. Nope, not a DIY project involving a drill and some glue, but rather yet another reason I have chosen to invest in Cactus as my Off-Camera Flash system of choice - there's a 1/4" tripod threading built right into the frame of the flash itself! Combined with that clamp, it can be attached literally anywhere - tree branches, tops/sides of door frames, fench posts, vehicles, and light stands to name but a few.

And finally, a bird's eye view of the arrangement followed by a closer look at how each of the lenses was illuminated from below:

A flash was placed in each box and gelled to match the color of the lens and/or brand, which also offered the added benefit of not only lighting up but also tinting the inside flaps of each accompanying box.

The flashes inside the boxes were Meike MK-300 mini speedlights (shown above right attached to a Cactus V5 and V6 transceiver) chosen for their diminuitive size but still offering full manual control of the flash output. The stock photos below show the buttons they feature and size compared to its two AA batteries. In addition to being a petite fully adjustable manual flashgun, it is also i-TTL enabled. Nikon "through the lens" protocol means if stuck one on the top of a Pentax camera it would only work in full manual mode, but again that doesn't stop it from being an excellent and portable all-manual flash, especially for the price!

Again, I wanted to close with saying thank you for your patience regarding the tardiness of this article as well as all your support with the review itself. I really appreciate it, and if you've come this far and haven't read it yet, then click here!

Continue to the ultra-wide 4-lens comparison

Travel Photography - Making the Most of Your Opportunity