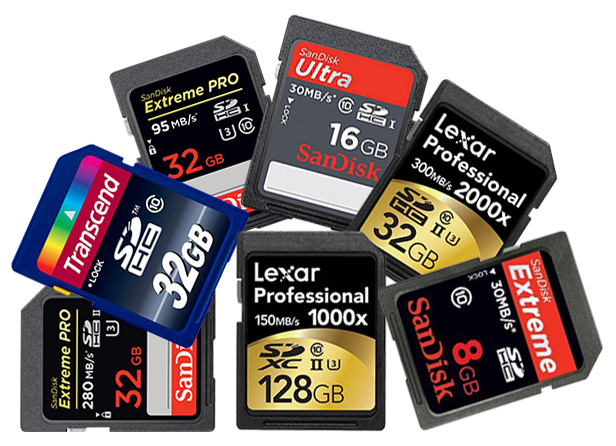 Ever since the debut of the *ist DS in 2004, Pentax DSLRs and compact cameras have used SD (Secure Digital) memory cards as their primary storage medium.  Because SD cards are subject to a continuously-evolving set of standards, we'd like to take this opportunity to shed some light on SD nomenclature and card types.  In addition, we will make recommendations to ensure that the card you pair with your camera delivers optimal performance.

By the time you finish reading this article, you'll be a SD memory card expert!

The first thing to note is that SD cards come in three different form factors: full-size, mini, and micro.  All Pentax DSLRs launched to date use full-size SD cards— the most common type.  Action cameras like the Ricoh WG-M2 use microSD cards, which are also frequently used in modern smartphones.  miniSD cards are comparatively rare and you won't find too many of them on the market these days. 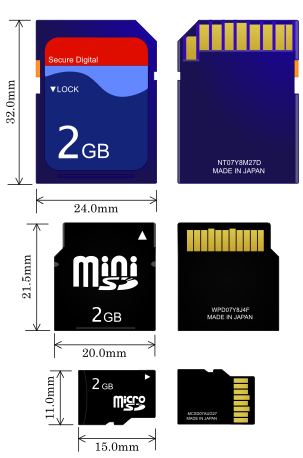 An important characteristic of all three SD card types is that they conform to the same technical standards.  This means that physical size does not play a role in determining card capacities (i.e. number of gigabytes) or possible transfer speeds.  Consequently, step-up adapters can be used to enable the use of microSD or miniSD cards in a standard SD slot without any performance penalties.

The only difference in terms of interfacing is that full-size cards have a write-lock switch on the side. 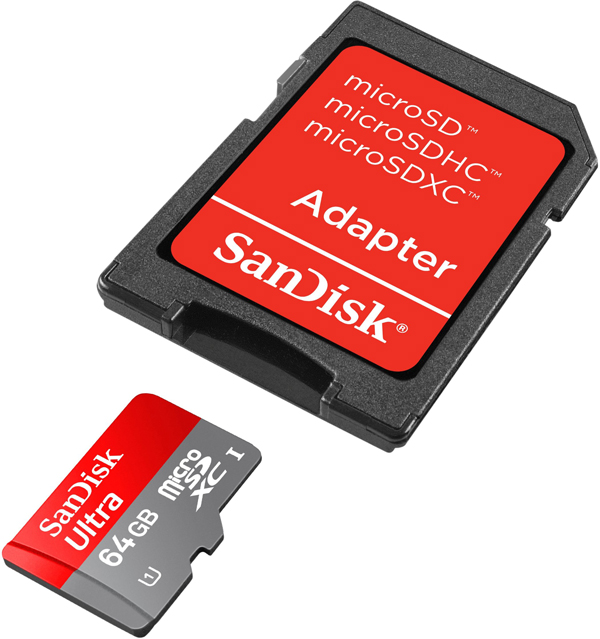 So why not use microSD cards exclusively, along with an adapter?  In come cases, smaller isn't better.  These tiny cards are more susceptible to physical damage and damage due to heat, plus they're easier to drop or misplace.  Well-built full-size cards can be quite resilient; some professional variants are even marketed as waterproof, shockproof, and X-ray proof.

Since Pentax DSLRs only use full-size SDs, we will be focusing solely on those cards for the remainder of this article.  Just keep in mind that all the terminology we are about to discuss also applies to the smaller SD variants.

Most current high-performance SD cards are of the SDXC or SDHC type, though standard SD cards continue to be produced to support older devices.  The table below summarizes available capacities for the three card types:

Although the SDXC standard defines capacities up to 2048Gb (2Tb), the largest cards on the market as of 2016 have a capacity of 512Gb.  Pricing for the biggest available capacity is typically very high, while cards smaller by a factor of 2 or 4 can be bargains in comparison.  It is only a matter of time before 2Tb SDXC cards hit the market and a new standard is developed to succeed SDXC.

Another interesting fact to note is that 4Gb cards existed as both SD and SDHC, whereas 32Gb cards are always SDHC and not SDXC.

Finally, as with any digital storage medium, the actual amount of user-accessible storage space is slightly less than the advertised capacity.  This is mainly because operating systems "correctly" calculate storage space in binary Gibibytes (1 GiB = 10243 bytes) rather than decimal Gigabytes (1 GB = 10003 bytes) which card makers advertise. 1GB is only 0.931GiB, hence the disparity.

SDXC and SDHC devices are backwards-compatible with older cards, but not vice-versa.  Even though the same form factor has been retained since the original SD standard, SDHC and SDXC cards both communicate using different protocols.  The following thus applies:

Now that we've covered SD card shapes and capacities, it's time to get a little bit more technical.  File transfer speed is arguably the most confusing aspect of memory cards.  At the same time, whether you're out shooting or at home copying photo to your PC, performance is a key consideration.

In a nutshell, there are four different SD bus types: standard speed, high speed, UHS-I, and UHS-II. Each has a different maximum operating speed as shown in the table above.

Knowing the bus type of a card can give you a good idea of its performance.  However, the bus speed does not directly correspond with the actual file transfer speed; we look at real-world capabilities later in this section.

icon, while UHS-II gets a

icon.  UHS-II cards are unique in that they have a second row of data pins. 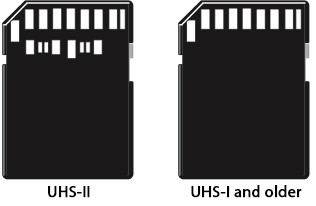 It's easy to identify UHS cards because they are denoted by a special icon.  But what about older standard speed and high speed cards?  The best way is to look at the speed classes shown in the next table.

Confusion arises because manufacturers aren't consistent in how they report card speeds, and because speed class ratings per the SD standard only measure one aspect: minimum sustained read and write speed.  These ratings and their respective icons are summarized below:

You will see at least one of these labels on virtually every SD memory card.  Ratings from different columns can be present simultaneously.  The Video Class labels were proposed in early 2016 and are just starting to make it onto production SD cards.  Video Class ratings don't call for any new hardware but are rather a verification of a manufacturer's specifications.

By now, you've probably figured out that many different real-world speeds exist for each SD class rating. While some card models go well beyond their class designations, others stick with the bare minimum.

Rather than grinding out further technical details, let's compare at a handful of real SD cards.  Click on any of the thumbnails to enlarge:

These examples show the limited extent to which class ratings correspond to real-world card performance.  Again, this is because class ratings guarantee a certain minimum read and write speed, while in practice, quality cards offer a much higher maximum performance in ideal conditions, at least in terms of read speed.

Comparing card C to card D illustrates this perfectly.  While both cards are Class 10 and use the UHS-I bus, the cheaper Extreme PLUS card only guarantees a minimum write speed of 10 MB/s (U1), though it can go up to 30 MB/s in ideal conditions.  The Extreme PRO card, on the other hand, is guaranteed to minimally write at 30 MB/s (U3) and can potentially write up to three times faster.

Some class labels (such as U3) were introduced well after cards with 30Mb/s or faster performance hit the market.  Prior to late 2013, card D would bear the U1 symbol despite having identical specifications and performance to the current version.

The specifications denoted by the * are based solely on the card manufacturer's internal testing rather than formal speed standards. But assuming you regularly format your cards and use a high-quality, non-counterfeit card, chances are that you will experience close to the maximum advertised speed when you use an SD card in a card reader or host device that supports its bus type.

Buyers beware: most memory cards only advertise the maximum read speed on the sticker.  The write speed can be considerably slower, as in the case of card B above.  Write speed is often more important than read speed when it comes to high-speed shooting or videography. 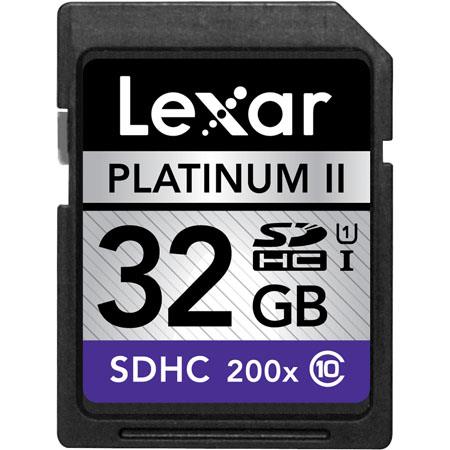 On an unrelated note, some manufacturers quote a "times" speed rating such as 200X or 150X.  This simply corresponds to the MB/s read speed with 1x being the base speed of a CD drive, or 0.15 MB/s.  The card above could have been labeled 30 MB/s.

Last but not least, due to technical factors and quality, actual performance may vary between two cards, even if they share the same speed ratings.

Every SD card has a specific physical size (standard, micro, or mini), family (SD, SDHC, or SDXC), bus type (standard, high speed, UHS-I, or UHS-II), and speed class rating.  Each card family supports a range of capacities.  UHS cards may have an optional UHS Class, such as U1 or U3.  High-performance cards made in 2016 or later may also bear a Video Class (V6 through V90).

All Pentax DSLRs since 2009 support SDXC cards, though some (such as the K-x, K-r, K-7 and K-5) first require a firmware update.  This presents an interesting paradigm: an older SD or SDHC card is needed to carry out the update itself.

All other Pentax DSLRs support SDHC cards.  Similarly, early models such as the *ist DS require a firmware update, and only a standard SD card can be used for this.

The table below shows the minimum card specifications needed to achieve optimal performance (continuous burst length, video length) with every Pentax DSLR model based on our testing.  Write speed is the key consideration since read speed will always be at least as fast.

Other well-known brands such as Sony, Samsung, Transcend, Kingston and PNY may offer lower prices but oftentimes do not deliver the same level of performance.  In particular, be on the lookout for write speeds that are substantially lower than the advertised read speeds.  Each manufacturer has a number of product lines with varying levels of performance.

Buyers beware: Counterfeit cards do exist on the market, especially on sites such as eBay.  Be cautious if you see a name brand card at a price that's too good to be true.  You also won't receive warranty coverage unless you purchase from an authorized seller.  High-quality, reasonably large SD cads are not expensive these days(see below), so saving a few extra dollars isn't worth the risk. 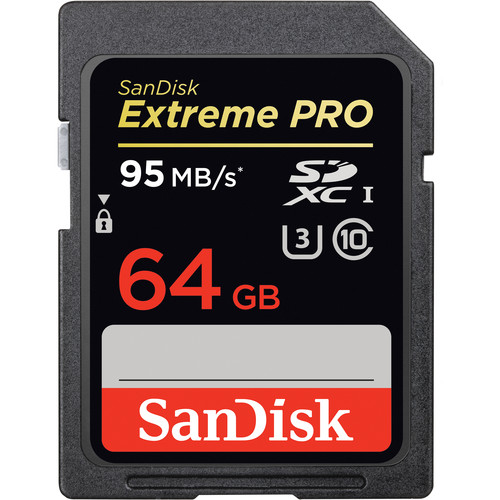 The card we currently recommend for Pentax DSLR users

Since recent Pentax models support UHS-I transfer speeds, it's a safe bet to invest in the fastest UHS-I cards, such as the 64GB Sandisk Extreme Pro 95 MB/s read, 90 MB/s write SDXC card.  At under $35 in the US, this capacity is a great value.  If you still use older Pentax cameras, the 32GB SDHC variant is a worthwhile supplement for around $23.  If you're shooting with the Pentax K-1 or 645Z and need extra space for those high-resolution files, you may also wish to consider the 128GB version for $65.

While you can potentially future-proof your kit with UHS-II cards and leverage their very high transfer speeds for copying files to your PC, it's possible that they will be both cheaper and offer much higher capacities by the time UHS-II speed support is added to Pentax cameras.

What if you bought a 95 MB/s UHS-I or a UHS-II card but aren't getting the advertised transfer speed while copying photos?  The reason for this is most likely related to your computer's USB port type and/or bus speed.  You need a USB3 card reader (whether it be internal or external), USB3 port, and most likely also a solid-state drive (SSD) to achieve optimal performance.

SD cards live by ever-evolving specifiations which are bound to get more complex as technology moves forward.  While you don't have to memorize all of the different speed labels and designations, it's important to know the speed capabilities of your camera so that you can pick a memory card that doesn't slow you down.

Fast memory cards have become affordable— even with capacities appropriate for the latest high-resolution cameras.  If you're still haven't made the switch to UHS-I cards, or at least Class 10 cards for older Pentax models, take the plunge.  Otherwise you might experience something like this: