Guide to Camera and Autofocus Settings for Shooting Sports

We probably all try out new things in photography because that can be fun. But it can also be a hard thing to do with a DSLR and all the dozens of settings you can use. Often some initial guidance helps.

Here we want to share some experience on shooting a certain type of sport (contrary to popular belief, Pentax cameras can well be used for this purpose!), actually some outdoor horse sports: show jumping. This is intended to get interested users going quicker and to provide an easy reference if you want to try it yourself, either because you are a rider as well, or maybe your kids and relatives are, or you just enjoy the sports and the horses from a photography perspective.

Whether you use a Pentax, Canon, or Nikon DSLR, the tips in this article should help you out with shooting sports!

I will separate this guide into a number of chapters which will all describe a certain setting and my rationale for using it. I guess the latter is the most important part, since it helps understand and allows your adjusting them if you find your scenario or preferences are different.

Remember, many ways lead to Rome and there is no "right" or "best" way to do things. There are only personal preferences. 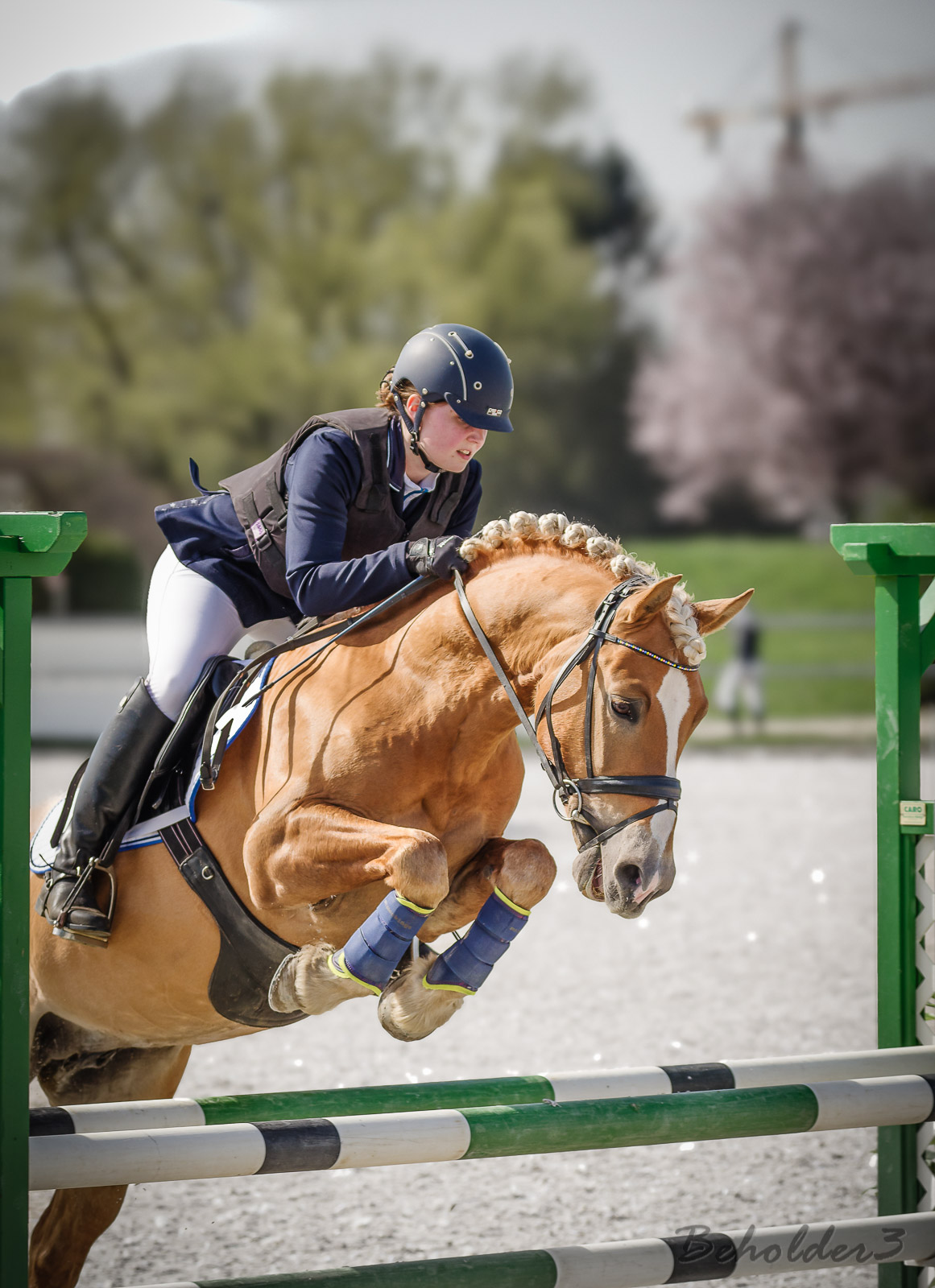 Shot from 45 degrees, this is what most riders seem to prefer

This scenario is about an outdoor event where I assume to have plenty of daylight around. The sports event itself consists of a number of riders with their horses following a predefined show jumping course over a number of obstacles (mostly about 8-12) in a limited time. So one horse/rider combo will only be available for 1-2 minutes.

I currently use the Pentax K-1 full-frame DSLR which is perfectly up to the job and allows for heavy cropping due to its 36 MP sensor. This comes in very handy when your framing is not perfect. The wide sensor dynamic range is also a great boon for this type of sports since most horses I have seen tend to be dark brown in color which doesn't look nicely textured straight out of camera. Lifting the shadows does make the images look a lot nicer.  My tips will generally also apply to recent full-frame (FF) bodies from other brands.

Choosing the Right Place to Shoot From 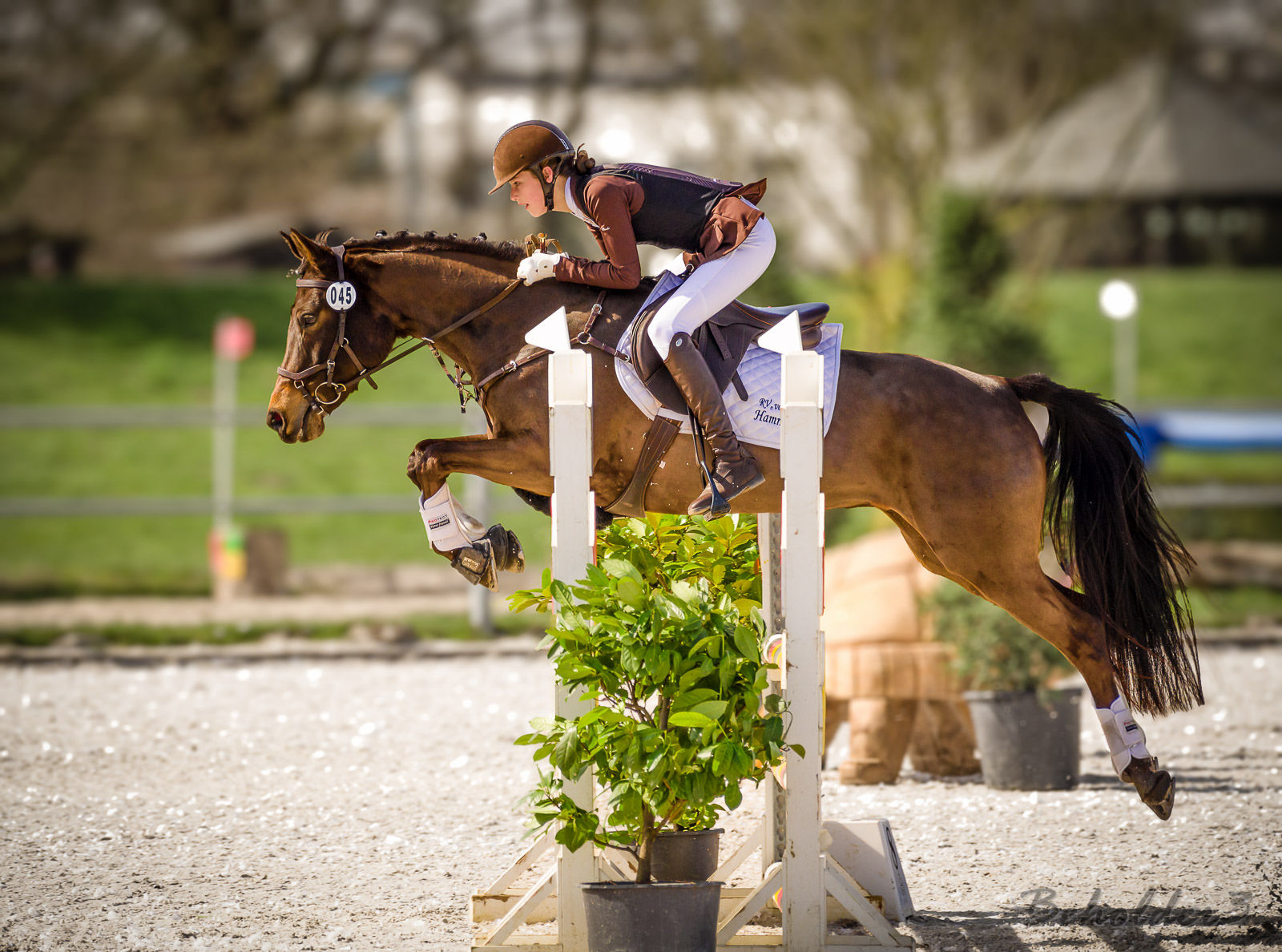 Shot fully from the side. Here you can see the whole beauty of the horse jumping

The most important part actually. Here are some tips:

My preferred timing is to either get the horse going strongly upwards just when the hind legs have left the ground for a few inches and the rider is leaning strongly forward or when the horse is floating right atop the obstacle. Try to shoot before the couple is drawn down by gravitation again.

When shooting with a variable aperture zoom like the 150-450mm F4.5-5.6 lens which I want to use wide open, Tv mode (shutter priority) is best. That is because I want to choose both a certain shutter speed and "wide open" which can be different on different zoom positions. But Tv tries to achieve lowest possible ISO at a given shutter speed by first opening up the aperture as much as possible. So it automatically adjusts aperture the way I want it. If I did choose TAv, then when going back to 150 mm from 450 mm the aperture would stay at F5.6.

I do use matrix metering here because I want to limit risk of burnt highlights. I also keep exposure compensation at 0 or maximum +1/3 EV.

As  mentioned above I would want to keep the 150-450mm F4.5-5.6 wide open. Using the 70-200mm at F2.8 aperture can be fun, but since a horse is a large ("deep") animal, I often prefer to choose F4 here, to have a better depth of field. At F2.8 and 200 mm FF it can happen that either the face of the rider or the face of the horse are out of focus, which is not too nice. Shooting from the side or at 45 degrees F2.8 can be handled. So if you want to shoot at a intended shutter speed and specific aperture like F4 on a F2.8 lens then better choose TAv mode.

For shutter speed I tend to go for 1/500 to 1/1000 of a second. No need to go faster and make do with higher ISO/noise. Depending on taste some motion blur can be nice to express the dynamics.

I always set ISO to Auto-ISO and give it the maximum flexibility (ISO limits at 100 to 204,800), while maintaining the slow curve.

I tend to shoot short bursts of 4-5 images in continuous shooting (high) mode to capture the horse going over the obstacle. If I were good enough in timing and only wanted one specific look I could simply prefocus for one single shot, but I often dislike some of the images based on minor details, so having a sequence is better.

Due to the many very dark horses I would not want to shoot JPG here, but prefer the RAW (DNG) option to be able to pull shadows up substantially in post-processing. Since bursts are rather short buffer size is not an issue here.

Generally I suggest switching off absolutely everything that might use up processing power in the camera as I fear this might slow down AF calculations. So deactivate all JPG processing options, even highlight protection and noise reduction. Remember that the camera always embeds a fully developed JPG into the raw files, even if that is strongly compressed and maybe lower resolution. But the camera always has to develop a JPG file even if you do shoot "raw only". 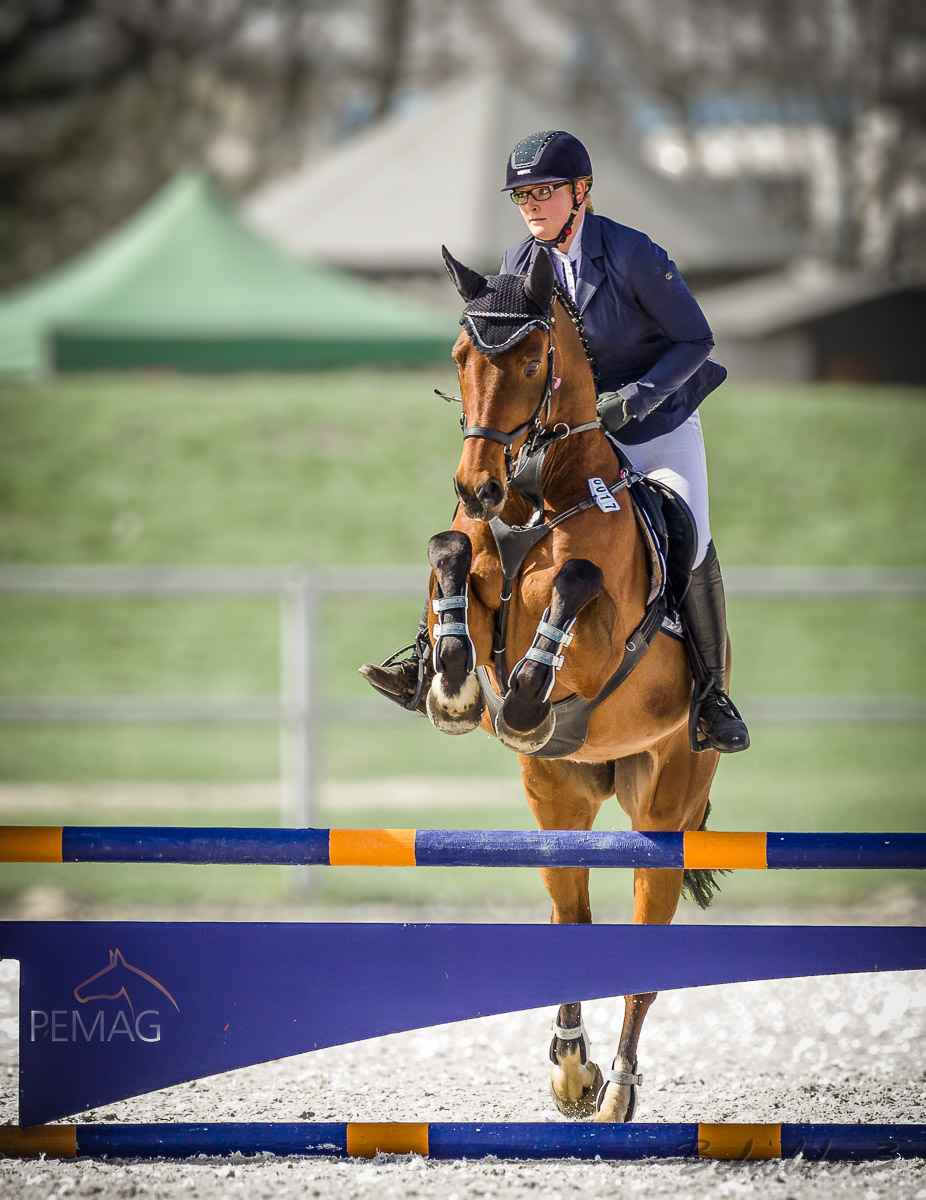 Shot directly from the front. It can provide some more dramatic impressions, but you see less of the horse.

If you are like me and want to capture a number of shots then you probably are not going down the manual prefocus route, which is otherwise perfectly valid for this type of event where you know the locations where the subject will come along. So switch your AF mode switch to "AF" and set AF mode via the button to "AF.C" for continuous focusing.

I suggest using the rear "AF" button to trigger autofocus even before you half press the shutter button. The longer the camera can focus on the subject the easier it can predict the focus plane. Using a long and heavy lens such as the D FA 150-450mm F4.5-5.6 I actually activate focus using the buttons on the lens barrel. However, I would change the camera AF button customization to something different, since it doesn't hurt to have both the AF button and the shutter button activate AF (i.e. keep the default menu setting of AF1).

For the AF active area I either use Expanded Area AF (S), which is displayed as "Sel 9" or Zone ("Auto 9"). I seem to get better results in this scenario using Zone AF where the camera can activate multiple AF points instead of only one in Expanded. In both modes it is very important that the photographer keeps the AF area over the rider's torso. This is probably the biggest "skill" part here, where a beginner suffers more misfocused shots that someone with good targeting skills.

With regards to the priority settings I chose "Auto" for both the 1st Frame action in AF.C and Action in AF.C Cont. The camera seems to balance things very well when I activate the AF calculation early enough via the AF buttons.

If using the HD Pentax-D FA* 70-200mm F2.8 ED DC AW lens which has an maximum aperture of F2.8 I always restrict myself to using the center three AF points which actually benefit from a F2.8 lens precision wise. This does not make anything faster/quicker but the precision might be better. Using Zone or Expanded Area with this approach might be overdoing it, but at least I want to choose a middle "F2.8" AF point as the starting point for Expanded Area based on this. Since a rider sits high on his horse, I always choose the topmost of the three F2.8 points.

The most crucial AF setting for show jumping is probably the "Hold AF status" setting which governs the reaction of the camera to things blocking sight onto the subject briefly or to situations where the user tracks the subject poorly and doesn't hold all AF points in use over the rider, but over some distant background. Technically in this case the focus system by default should refocus quickly on the background or the item blocking sight, but I as photographer do explicitly not want this to happen. I want the camera to ignore both my small errors and irrelevant stuff blocking the subject for a split second. In horse jumping you will pretty much all the time have some parts of the course obstacles blocking the sight onto the horse/rider. So I set this to "high". Remember, this setting does not slow down AF adjustment and prediction on the subject itself. It just gives a waiting time before reacting to major abrupt/sudden focus distance changes.

Since horse jumping does not only encompass a fast horizontal movement but also quick vertical movement (jumping) which I have to follow with the lens there is no point and nothing to be gained from shake reduction. So I suggest to switch it off, as it could only provide some unpredictable issues.

I hope these explanations help any of you who want to shoot the same or a similar scenario.