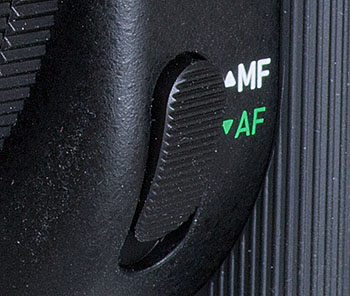 Development of new technology for our digital cameras moves ahead at a fast clip with the objective of removing current shortcomings.

In this blog post we will take a look at the trends in the following areas, all of which are related to improving auto-focus and making it suitable for movie recording:

Cameras have recently been introduced that feature one or more of these improvements and we are convinced that more and more camera makers will embrace these new technologies. Not only will movie recording benefit, but also still photography, in particular in connection with mirror-less cameras and when using live view with a DSLR.

Before we discuss this topic let's review how most DSLRs achieve auto-focus: 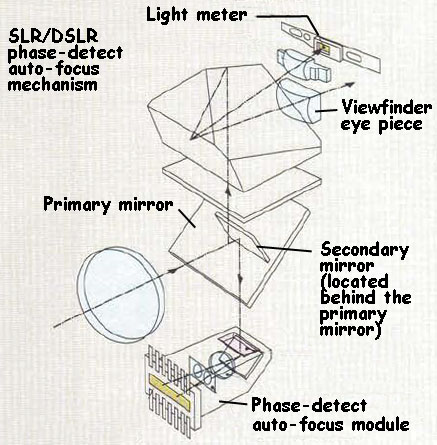 With the mirror down (i.e. prior to shooting) some light is directed by the secondary mirror to a phase-detect sensor in the bottom of the camera. Phase-detect auto-focus is very fast because the circuitry can calculate how much the focusing mechanism of the lens needs to turn to achieve proper focus. However, focus must be determined prior to shooting (before the mirrors flip up and allow the light to hit the imaging sensor) and is therefore not available during movie recording. Naturally, this technology is not available on a mirror-less camera at all.

This is the technology pioneered by point and shoot cameras. Proper focus is determined by the camera in a trial and error fashion by focusing the lens back and forth until maximum contrast is achieved of the image formed on the sensor. This technology lends itself to mirror-less cameras and is also used on DSLRs in live view mode (where the mirror up and out of the way). However, while more accurate than phase-detect auto-focus, contrast-detect auto-focus is too slow to be useable during movie recording.

The solution for movie recording

Auto-focus during movie recording is generally not available, neither on DSLRs nor on mirror-less, since neither phase-detect nor contrast-detect as currently implemented are suitable solutions.

Sony tried a stop-gap solution in some of their Alpha DSLR models. These cameras had a fixed mirror that would direct light to the phase detect auto-focus sensor also during the recording of movies. The resulting light loss of the image formed on the imaging sensor hurts image quality visibly, however, and this technology is bound to flop just like the film cameras before it that used the fixed mirror approach flopped.

What we will see instead in widespread use is imaging sensors with several phase detection sensors embedded in the surface. Canon has recently introduced this technology with the EOS Rebel T4i. Although it has only one phase detection auto-focus point (in the center) this is a huge step forward towards creating an auto-focus system that is fast enough in movie mode. This technology lends itself to mirror-less as well as DSLR cameras where the mirror is flipped up during movie recording.

The other issues with auto focus during movie recording are noise from the auto-focus motor and gears and jerky movement. Today's lenses were designed for still photography where these issues were of less importance.

To be suitable for use during movie recording the motor must not only be built into the lens for speed and accuracy, but also designed to be silent and with smooth movement. In the case of Canon this has called for a new motor type, stepping motors, as Panasonic has pioneered borrowing the technology from their video cameras. Canon has recently gone in this direction too, by introducing two lenses with stepping motors. Whether or not Pentax's DC motors are up to the task of continuous auto-focus in movie mode remains to be seen. Perhaps Pentax will also have to introduce a new motor type as well (and firmware to drive it).

Many DSLR and mirror-less cameras allow the photographer to select which area of the image the auto-focus system should be concerned with. This is usually achieved by a four-way controller or joystick and is slow and cumbersome. We predict that we will see widespread availability of  a much more user friendly touch screen solution like the one recently introduced on Canon's EOS M mirror-less, where the photographer just taps the rear LCD monitor on the area that shall be in focus.

What else does the future hold for the camera industry?  We are eagerly looking forward to the Photokina trade show to see what new technology will be showcased by Pentax as well as other manufacturers!