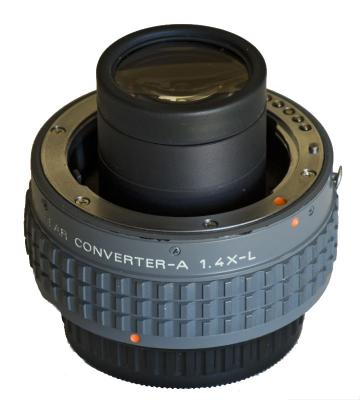 On our forum we often get questions about teleconverters from new users. While the objective of the teleconverter - to extend the reach of a lens - is not in question, many other aspects of teleconverters may seem a bit overwhelming at first.

We will try to shed some light on this topic in this article. Our purpose is not to review the many available converters in terms of optical performance, but rather to explain the features and interaction with the camera's exposure and autofocus mechanisms. For product reviews and teleconverter options please consult the user reviews in the lens databases (Pentax teleconverters (film era), Pentax teleconverters (digital era), Third-party teleconverters).

Pentax calls many of their teleconverters "Rear Adapters". We will use the more common term teleconverter or simply converter in this article.

A teleconverter mounts between the camera body and the lens. It is basically a tube with a number of optical elements which bend the light rays outwards thereby extending the effective focal length of the lens. 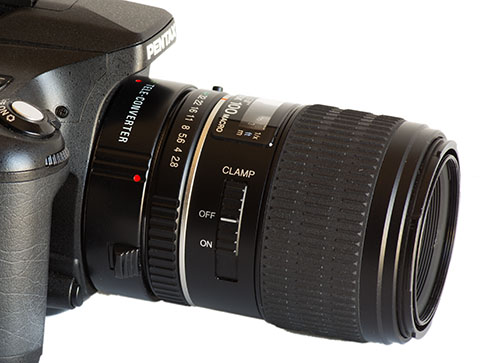 Teleconverters work best with telephoto lenses; don't expect stellar optical performance of a wide angle lens with a teleconverter attached! Some teleconverters may yield acceptable results with a 50mm lens, but try not to go any shorter than that.

All teleconverters degrade the optical performance to some degree, some more than others. They also magnify the optical flaws of the lens. Best results are obtained with "matched" teleconverters and lenses, i.e. some converters's are designed to work with one specific lens, or with a small group of lenses, and is optically optimized for that application. Generally speaking, 2x converters degrade optical performance more than 1.4x converters. If you go for a 2x converter, look for a top-of-the-line model.

The bigger issue is that of focusing. If the effective largest F-stop with a converter drops to a slow F6.3 or F8, the combination becomes difficult to focus with. The viewfinder becomes dark hampering manual focus, and autofocus (if supported by the converter) becomes sluggish or may not work at all.

Will It Fit My Lens?

Whether or not a particular teleconverter will fit a given lens or not depends on the construction of the converter (and in some cases also the lens).

Even if a teleconverter fits mechanically it may not well work optically, i.e. it may not yield acceptable image quality. Many teleconverters are designed to perform only with lenses in a certain range of focal lengths, for example between 70mm and 300mm. If specifications are not available one will have to resort to simply testing it out. If the converter fits mechanically there is no risk of damaging the lens by running such tests.

This is the more tricky part and requires a close look at the mount of the teleconverter at hand.

The illustration below identifies the parts to look for. You don't need all to be present; that depends on the lens and which functions you are willing to forego. We use the Tamron-F AF Tele Converter 1.4x Pz-AF MC4 for this illustration since it has all possible features available. Click to enlarge. 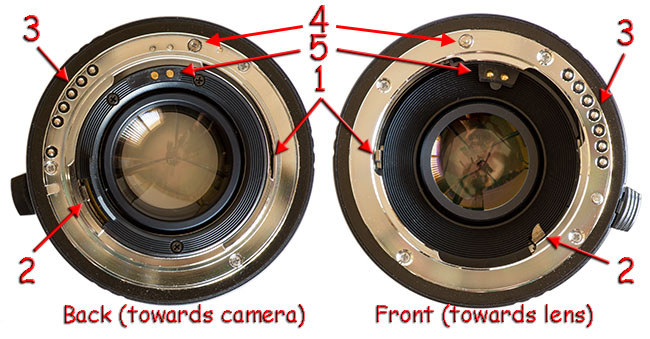 Based on the above analysis we get the following compatibility table between a digital Pentax K-Mount camera, a teleconverter and a lens. Feature 1 can be ignored for digital cameras.

* The HD Pentax-DA 1.4x converter is the only converter we know of that provides the effective focal length to the camera

These images of the Tamron converter show the various features from another angle. Click the image to enlarge.

The Odd Man Out

When Pentax introduced autofocus way back when with the F-series of K-Mount lenses, Pentax also introduced a special adapter, the SMC Pentax-F AF Adapter. This is a 1.7x teleconverter with built-in autofocus capability, which enables autofocus even with K-, M- and A-series manual focus lenses. 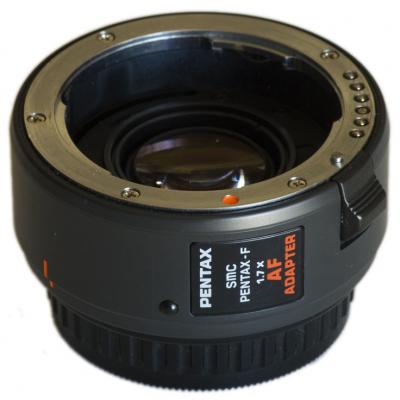 The intention was to provide a means for turning manual focus lenses into AF lenses, but this adapter can also be used with AF lenses in which case it takes over the autofocus job from the lens.

On the back of the adapter is a drive shaft with which the camera can move the optical elements in the adapter and thus focus the lens. On the front there is no drive shaft (and no SDM contacts), so any autofocus lens mounted loses its own autofocus capability.

The adapter has features 1 through 3 mentioned above plus built-in autofocus and 6 lens information contacts on the front so we get this compatibility table:

This adapter can be a bit quirky to use since its "focus throw" is somewhat limited. It works best if the lens is pre-focused near the subject.

Unlike extension tubes for macro photography teleconverters become a part of the optical system and it is therefore worth while to spring for a more expensive converter, preferably one that is designed specifically for the focal length(s) of the lens(es) it will be used with.

All film era Pentax teleconverters and many great third party converters have been discontinued, but it might be better to hunt down a good converter on the second hand market than buy a cheap knock-off from new. Or go for the current HD Pentax-DA 1.4x converter.

When shopping for a teleconverter it is advisable to go for a converter of the highest optical quality you can find.

Alternatively, forego the teleconverter and crop the image! This is in many cases a viable approach with today's high resolution sensors.