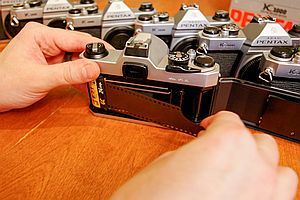 The Pentax K1000 is one of the most successful cameras in all film camera history, having one of the longest production runs of any camera (1976-1997). This camera was quite affordable, and was widely mass-produced. Despite those facts, the K1000 is a very well-built and an incredibly solid unit, with many copies still operating as expected on the second-hand market.

Want to see more PentaxTips videos? See these links for a K-70 overview and a K-3 Mark III overview!