In an earlier article titled - Photography Terms Cheat Sheet - we explained common terms and abbreviations used when discussing photography and cameras. In this follow-up article- a guide for newcomers and a recap cheat sheet for Pentax users- we explain common terms and abbreviations used to describe Pentax lenses. We start with generic lens terminology and then move onto Pentax specific terms.

A Fisheye lens is an ultra wide angle lens with prominent barrel distortion. Fisheye lenses often have an angle of view close to 180 degrees.

Lenses with magnification equivalent rougly to that of the human eye have "normal" focal lengths. A FL of around 35mm is considered normal on a APS-C Pentax DSLR, and 50mm on a Full Frame (FF) SLR or DSLR.

A Prime lens is a lens with a fixed focal length (as opposed to a zoom). Because of their simpler and/or more precise optics, prime lenses are associated with higher Image quality (IQ).

Lenses reaching beyond the "normal" field of view.  Telephoto lenses are used to capture distant subjects.

A Tilt Shift Lens has freedom of movement in a plane parallel to the plane of the sensor. When photographing tall buildings you don't need to tilt the camera. Instead, the lens slides up parallel to the sensor. This results in distortion free images.

Ultra Wide Angle. A lens with a FL shorter than the smaller side of the image sensor fitted on the DSLR. FL of less than 24mm is considered UWA in FF SLRs and DSLRs, and 15-mm in APS-C DSLRs.

Wide Angle. A lens with an EFL less than 50-mm is referred to as a WA lens. The angle of view is wider than that of the human eye.

A Zoom lens has a variable focal length. They are more versatile than Prime lenses, but unless fitted with high end optics they have a lower IQ. 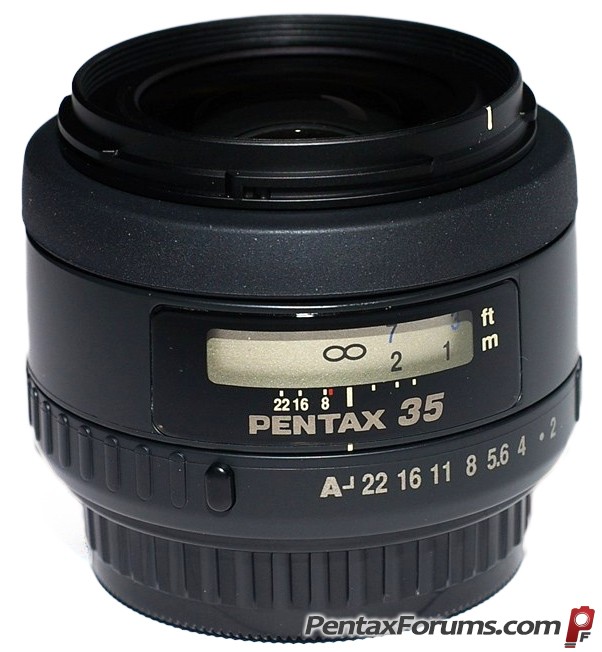 Legacy Pentax lenses include the K, M, A, F, FA, and FA J series.  A full listing and overview of Pentax lenses can be found in our lens database.

The following two lens quality indicators are applicable to the current as well as legacy Pentax lens series.

Premium lenses with higher image quality, all-metal barrels, and an emphases in a small form factor.  These lenses generally sacrifice speed for size.

The lenses lack an aperture ring, which limits their usability on legacy film cameras.

Limited lenses feature premium image quality and metal barrels as well as a small form factor, which comes at the expense of slower aperture.

D FA lenses are designed for full-frame cameras.  Their lens coatings and optical formulas are optimized for DSLRs. 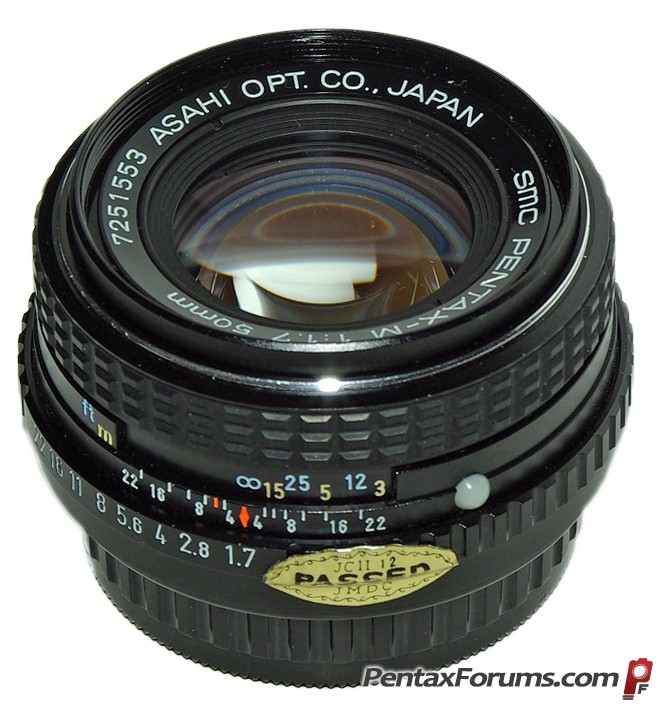 The following are Pentax legacy lens series in the order of their evolution.

First generation K-mount (see below) lenses with manual focus and no electronics. K is an unofficial designation. The names of the lenses started with SMC. For example, SMC Pentax 28mm F3.5.

The M series lenses were smaller than the K lenses but otherwise identical. The smaller size was better suited to the smaller bodies of the newer model Pentax SLRs ( Pentax MX and Pentax ME Super).

The FA series lenses were a variation of the F series with electronic support for MTF program line and power zoom (on select lenses). (note: on DSLRs, the aperture ring should always be set to "A", as the aperture setting can be controlled via the camera body).

This small series of lenses lacks the aperture ring but otherwise offers the same functionality as FA lenses.  The lack of an aperture ring precludes the use of film SLR bodies without electronic aperture control.

Pentax initially adapted the M42 thread mount developed by Carl Zeiss in 1938 for its lenses. In 1975, the company introduced the proprietary K-mount standard for its 35-mm SLR cameras and has stuck with the standard till date. All Pentax SLRs, DSLRs and APS-C Mirrorless ILCs feature the K-mount and all Pentax made lenses are K-mount compatible. In other words, you can fit the oldest Pentax lens you can lay your hand on the latest Pentax DSLR, and vice-versa. (A M42 mount lens can be fitted on a K-mount camera by using a M42 to K mount adapter.)

Over the years, Pentax has tweaked the K-mount to support additional camera functionality resulting in, broadly speaking, the following variations.

KA-mount lenses add an 'A' setting on the aperture dial, which gives the camera body control of the aperture. Other, numeric settings are used for manual aperture modes. Automatic aperture control facilitates shutter priority and program auto exposure modes.

Pentax lenses that support the mount are marked Pentax-A. The KA-mount is completely backward-compatible with the original K-mount.

The KAF-mount adds auto-focus to Pentax lenses. The mount features a small screw drive shaft for focusing the lens.

The current series of Pentax cameras use the KAF mount and its variants (KAF2 and KAF3). They support autofocus either using the screw drive shaft or a motor (SMC or DC) inside the lens.

Pentax lens names may include the following abbreviations indicative of their features.

Aspherical elements, used in wide angle lenses to get a flatter focus field and better corner/edge sharpness. Like ED (below), it costs more.

All Weather lenses (dust+moisture protection).  All DA* lenses are AW even though this is not indicated in the lens name.

See this review for a comparison of SMC and HD coating.

Internal Focusing. The barrel of the lens doesn't change during focusing; just the glass elements within the lens move. IF mandates more complex engineering but makes it easier to support the lens while shooting.  WR IF lenses are also less prone to water ingress in rainy weather.

Support for switching from automatic to manual focus quickly with a turn of the focus ring while continuing to look through the viewfinder.

Super Multi-Coating (SMC).  This is Pentax's standard multi-layer that has evolved over the years while retaining the same name.

Without Quick Shift support the photographer has to first flip the focus selection switch/clutch to manual.

Pentax lens names may include the following abbreviations indicative of the type of autofocus that they feature.

The SDM mechanism provides smoother and much quieter focusing than traditional screwdrive.  The camera is also able to make more accurate micro-adjustments.  However, SDM is prone to failure in certain lenses.

Companies such as Sigma, Tamron, and Samyang currently also produce lenses desiged for Pentax cameras.  You can read reviews of these lenses in our third-party lens database.

Generally speaking, it is either not possible or practically feasible to use Canon or Nikon lenses on Pentax cameras, so only third party lenses made specifically for Pentax mount should be used.

The only exception to this is for universal lenses such as Tamron Adaptall or M42 screwmount lenses, which can be used with the appropriate adapter.

Teleconverter. A secondary lens mounted between interchangeable lens camera body and its main lens. A TC magnifies the image projected on the sensor. An indicator within its name - 1.4x, 1.7x, or 2x -  specifies the degrees of magnification.  For example, a 100mm lens with a 1.4x teleconverter would have an effective focal length of 140mm.

About The Author
Inexorable

Photography has been an enduring interest since childhood, but I didn't have time to pursue it with much seriousness till six years ago when I bowed into semi-retirement after serving in the...
More articles by Inexorable →