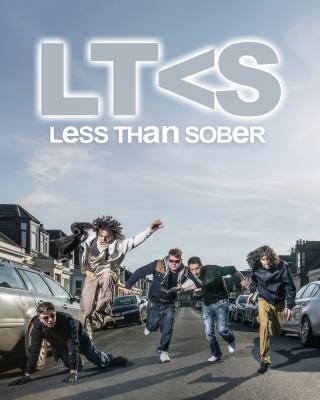 On the 17th of February I had arranged to meet up with a group of lads from a band called "Less Than Sober". Less Than Sober are a Rock/Punk/Pop band from Saltcoats, Scotland who aim to take the music industry by storm in 2013 with their energetic sound and the release of their new album called "57 steps". They have also just recently released their promo single/video called "Wanted".

As I pulled up to the meeting point early in the morning the guys directed me to the street that wanted to use for some shots. As I unloaded my gear we got to talking and decided to play around with some ideas. The street itself posed a technical challenge: how to light five guys in bright sunshine with one 400w/s strobe.

Even though I had a bunch of lights with me, only one of my lights had the power to overcome this kind of situation, even then without any modifiers and in close proximity.

For me the best way to do this was to split the image up into multiple frames. This would let me move my light between frames and light the members of the band properly. It gave me the flexibility to capture them doing fun stuff like running and jumping so I could pick the best frames to merge later. The down side was that I couldn't move the camera between frames, and with it being in the middle of a road we, had cars to attend to (but luckily for us, it was relatively quiet).

The final shot, shown above, was made up of four frames:

The one light that stayed constant was the sun, which I was using as a rim light. The other light was moved in each frame to bring it close to each subject. It didn't mater if the light was in the frame, for as long it wasn't blocking the subject being shot, it could be removed in post.

In the diagram you can see the frames that were used to make up the image and the position of the light. 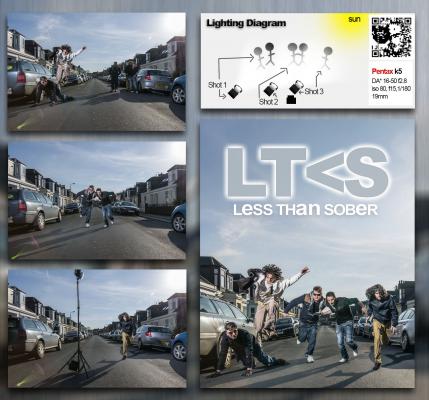 Two things to remember when shooting outside:

Since it was a really bright day, I was already at my max shutter speed for flash sync. Because of this, I had to start stopping the lens down to get the exposure I wanted. If for example a big cloud came over and blocked the sun during one of the shots, I could change the shutter speed to 1/80 to make up for the loss of light without affecting the flash strength.

Merging the images together is pretty simple as long as you remember a few things when taking the original photographs:

Once you have the images it's pretty easy to join them together with any software that supports layers. All you have to do is just hide/show the information on each layer that you want. There is really no need to be all that accurate either since the details in the images apart from the subjects should be the same on each frame.

I hope you all enjoyed this image and the information about it, and I have to thank my good friend Salty for getting me in touch with "Less Than Sober", as I had a great time shooting them and look forward to working with them in the future.

-Paul Monaghan (Usuqa on the forum)

If you want to find out more about the band, check out their new video on Youtube.  Click here to view my band photo in a larger size.

The True Power of the Pentax Q