The Making of "Reflecting Java": A Tutorial 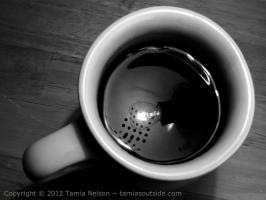 As you may know, in addition to our official Monthly Photo Contests, dozens of weekly photo contests and events are hosted by our members.  And while each event typically has some sort of winner, in the past, those winners have never had a chance to reach out to others users and talk about their technique.  Today, all this changes with our first "making of" article by Tamia Nelson, winner on one of the Weekly Photo Challenges.

Without further ado, let's take a look Tamia's guide about how the photo above was made!  The full version of the photo may be viewed at the end of the article.

I'm humbled to have received an invitation to describe how I made "Reflecting Java". This tutorial will provide an overview of the technical and artistic aspects of producing the final photo you see above. If this helps others half as much as I've been helped by the Pentax Forums community, I'll be well pleased.

Pentax K200D, Pentax 18-55mm II, UV filter, Slik U-212 tripod, cable release. Aperture Priority, No Flash, 1/2 sec, f/22, ISO 100, EV +0.5, focal length 18mm, JPEG. I used the lowest ISO possible the K200d is capable of in order to minimize noise. The aperture was set high to maximize depth of field at so short a focal length. The shutter speed was chosen by the camera based on the other two settings.

My post-processing set-up is minimal. I use a MacBook (2.4 GHz Intel Core 2 Duo processor and 2 GB of RAM) running Mac 10.5.4 (Leopard). For software I have GraphicConverter v6.4 by Lemke, and Gimp v2.6, though I didn't need Gimp for this photo.

My photo "Reflecting Java" was shot as an entry for a Project 52-4 contest (aka P52) which had the theme subject "Light - Reflections." Photos entered in this P52 were to be taken between January 15 and January 22, 2012.

Serendipity helped me decide on the subject for this photo. Most of my photography is of subjects in nature, and because I live near a river, water was first thing to come to mind when I saw the contest theme. But January was cold, dark, dreary, and the river was sheathed in ice. I had little confidence in finding a "wild" picture to suit the theme, so I kept my mind open and eyes peeled for other possibilities as I went about my day to day business.

At breakfast during dawn one morning, I noticed that the small bulb of my table light was reflected by the black coffee in my mug. I found the reflected elements intriguing -- the pattern of shade vents, the highlights around the rim and the edge of coffee, and the sharp bulb filament all seemed promising.

I played around with different placements for the mug as it related to the light and to the table's wood grain, then I set up my tripod and camera. Choosing a lens took a little thought, because I could have used a Sigma 10-20mm f/4-5.6 EX DC or a Pentax 18-55mm AL II (the "kit lens" which came with my camera). I chose the latter because I didn't think that I'd want the ultra-wide end of the Sigma, and I didn't want more than the coffee cup and a bit of the table in the frame.

Using autofocus, I focused on the reflection. Bright reflections can fool the camera's sensor, so I bracketed the exposures. Also, I tried different angles with the camera to find the most pleasing placement of the reflection. In all I shot seven photos, and after downloading them to my computer I enjoyed my coffee while reviewing them. 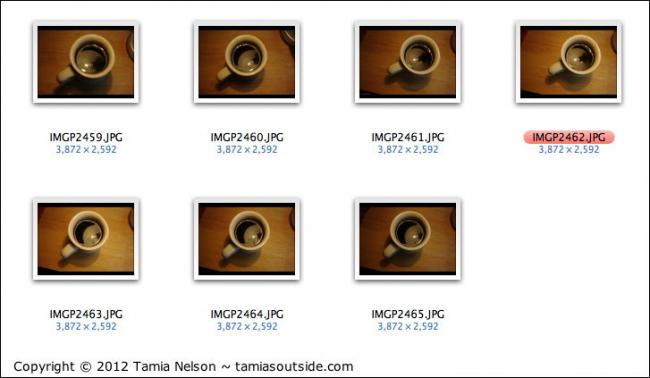 I selected my favorite and highlighted the title in red, then made a copy of the original to work to put through post-processing. Here's the original image, reduced in size but otherwise unprocessed: 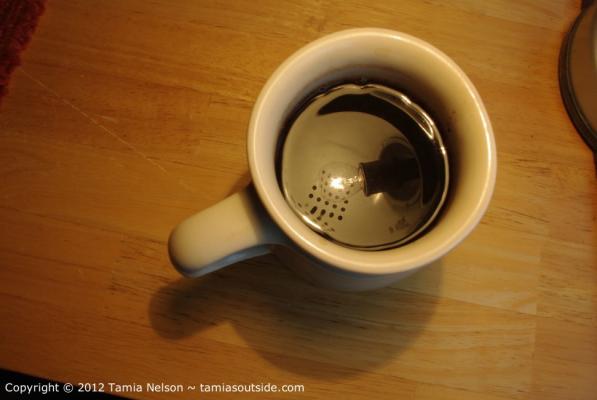 With that decision made, it was time to move on to...

The first step was to crop out distractions while tightening the composition to draw the eye to the reflection. This is helped by the circular frame of the cup rim, and inside that, the ever smaller concentric circles formed by shadows and highlights.

The lamp's base on the upper right needed to be removed, as did a placemat in the upper left and a dark triangle (the table edge) in the lower left. I wanted to bring in the photo's margins to emphasize the reflection but not so much that I removed the context (the cup, the table). I tried several different crop ratios and settled on a 4:3. I then reduced the image size to 730 pixels wide and 546 pixels high while maintaining a 100 percent compression. I chose this size because it would fit comfortably in the Forum's column, and wouldn't be too large for laptop users to see completely within their display.

That done, it seemed to me that that color in this photo distracted rather than enhanced, so I converted the image to monochrome using the most basic of operations -- desaturation. GraphicConverter provides no better way (not that I know of, anyway).

The next step was to alter curves slightly to bring out the reflection a little more without washing out the bright filament or other highlights. A minor tweak to contrast helped there, too. The image was a bit soft even after using a tripod and cable release to trip the shutter. (Perhaps if I'd locked up the mirror the image would have been sharper straight out of the camera.) A minor adjustment (10 percent) using GC's Sharpen Edges feature did the job. I was pleased with the natural vignetting which came out in processing. This vignetting was caused by the narrow cast of light from the lamp.

Lastly, I reduced the image bulk by compressing to 85 percent, which maintained a sharp image without adding bulk to my online file. I added my copyright, uploaded the image to my website, and entered the contest.

One last note about PP... In retrospect, I might have cloned out the scratch in the lower left quadrant of the image, but apparently its presence didn't bother the judge!

- If you're in the photographic doldrums or if you're trying to stretch your shooting muscles, enter the challenges and contests on the Pentax Forums. You'll find them in "Mini-Challenges, Games, and Photo Stories", and "Weekly Photo Challenges" sections of the Forums. For point & shoot photographers, there's a "Pentax Point & Shoot Competition" especially for compact cameras. Find it in the "Pentax Compact Digital & Film Cameras" section of the Forums.

Contests can concentrate your mind's eye and encourage you to shoot subjects you might not otherwise have considered. The competitions are friendly, and it's always interesting to see others' interpretations of the themes. If you win you then have to judge the following week's contest, which can be daunting but judging also helps hone skill because it forces you to think carefully about technical aspects and interpretations of the theme.

- Keep the contest subjects in the back of your mind as you go about your daily routines. Be open to new subject possibilities to suit the theme. The friendly nature of the Pentax Forums contests makes trying new subjects easy.

- Try to shoot photos so that they require as little post-processing as possible. Especially if you shoot RAW (I didn't), you'll probably need to do some work in the digital darkroom. Becoming proficient in PP is important in the digital age, where the photographer must bring out the most from an image using software -- work that would have been done in the darkroom in the age of film.

- Be open to serendipity!

It's easy to become so consumed by the qualities of the cameras and lenses (and even software) that we DON'T have that we don't take time to master what we DO have. When I find myself thinking too often about the shortcomings of my kit, I try to remind myself that the photographer is the most important part of the set-up. Learning to work within the limits of the gear we have, and squeezing the most from them, can make great photos.

Here's the full version of the final result: 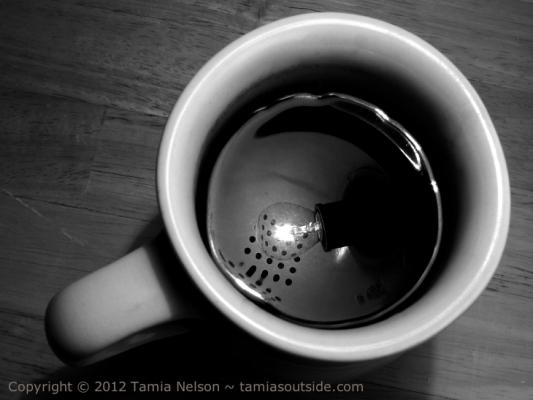 A Photographer's Guide to Perspective Distortion