Now in its fifth incarnation, the Ricoh Digital Camera Utility (formerly Pentax Digital Camera Utility or PDCU) retains its reputation of being tough to love, but can grow on you, especially as a free bit of software thrown in with your Pentax kit.  The software is included with mid-range and advanced Pentax DSLRs such as the K-3 II, K-3, K-S2, K-S1, 645Z, and others.

I played with what was formerly known as SilkyPix, as it was thrown in with my then Pentax K110D over ten years ago. Few RAW editors could load PEF files at the time. SilkyPix loaded them OK. But its user interface and workflow proved tough for me.

I moved across to LightZone (now open source) but eventually adopted Lightroom when LightZone’s commercial development ceased in 2011. LightZone has a cult following mainly because it emulates what I used to do in a darkroom back when I printed from my Pentax H2 (c 1960). It attracts a passion among its users somewhat like Pentax owners. So my move to Lightroom was reluctant but a prudent move, in retrospect.

So when I treated myself to a Pentax K-3 a few months ago I noticed a raw editor now called "Ricoh Camera Utility 5 powered by SilkyPix" (hereafter DCU5), was thrown in. I'd been diligently processing my Pentax DNGs in Lightroom. But I thought I’d give DCU5 another look.

While updates for the DCU software are available through the Japanese Pentax download site, it is not possible to download the DCU in its entirety, nor is it possible to upgrade from version 4 to version 5.

The software program which runs on Mac and Windows, promises to manage, view, and edit images shot using Pentax or Ricoh digital cameras. Its help file suggests its work flow is simple.

You just copy your RAW images to a separate folder, then use its “Browser” to select which images are to be processed. 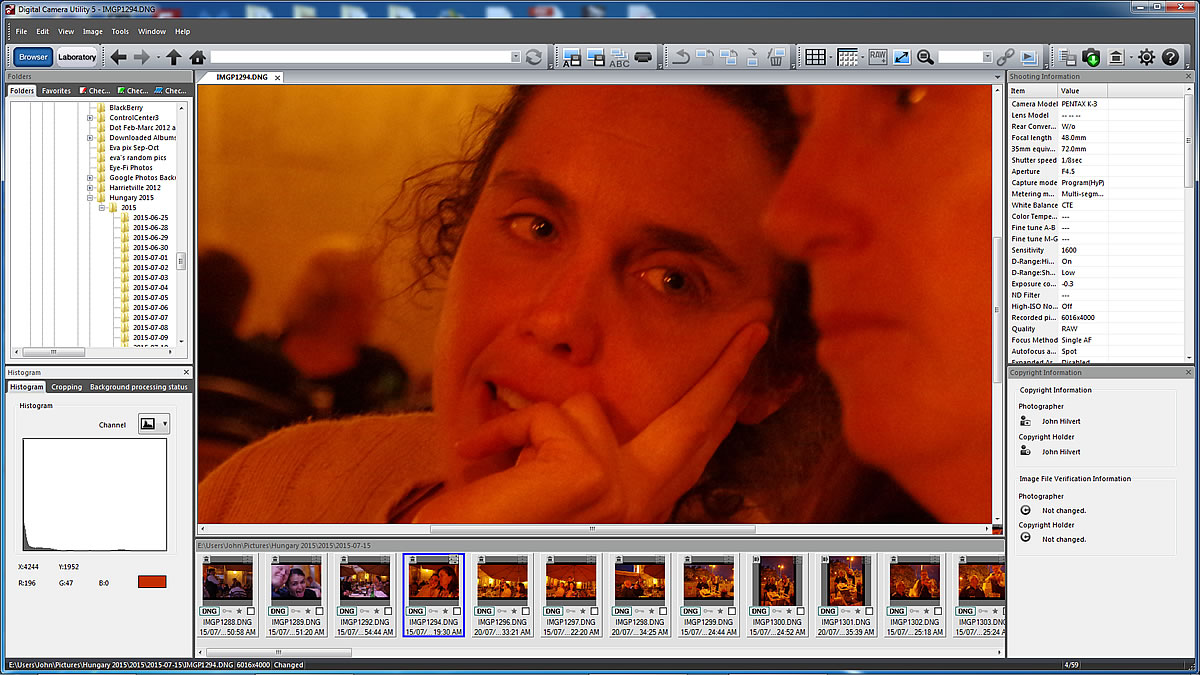 When you click on its “Laboratory” button, you get to the meat and potatoes of the software. Now you can process and edit your RAW images. 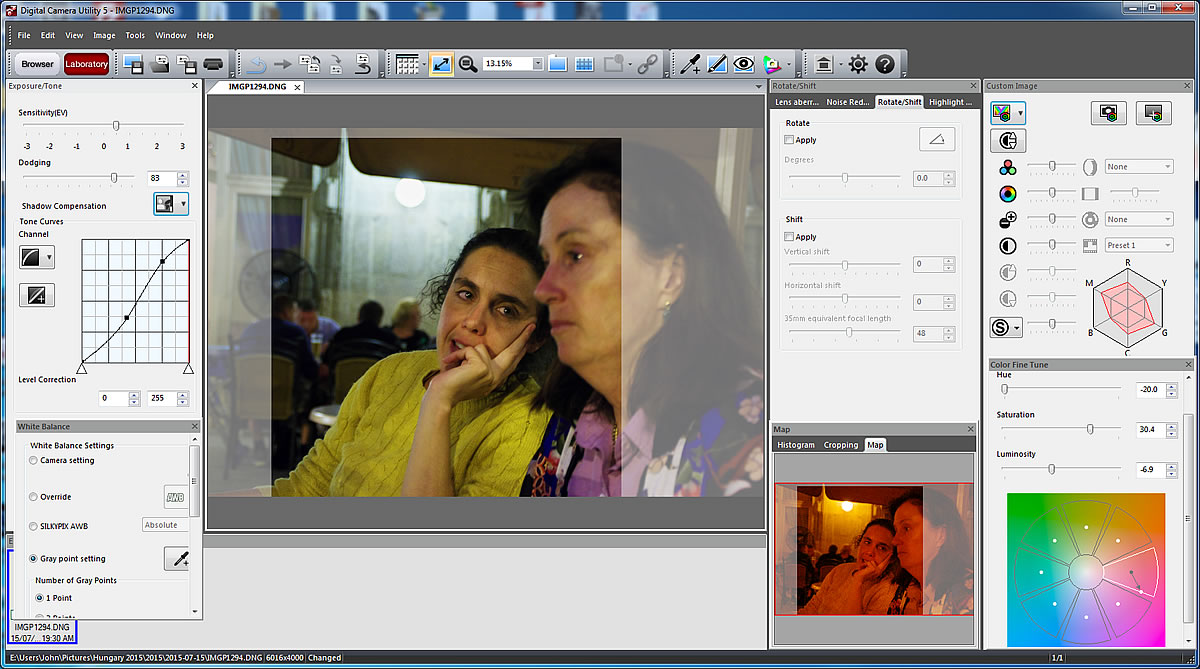 Finally you can view, save as JPEG or TIFF, files to print or later refine further in another program such as Photoshop, Lightroom etc for more processing.

It offers a slideshow utility to display several images as well and its interface can be configured to suit your work style.

Among its more significant improvements, it corrects its unfortunate tendency to enlarge thumbnails of a different image from captured setting when displayed. Previous updates added lens profile data for the many new lenses launched in recent years.

Another corrected issue was the replacement of AdobeRGB with sRGB when editing multiple images.

Once installed and updated, the program ran well on my Windows 7 64 bit system. But it is beefy with an i7-3770 CPU @ 3.40GHz and 16 Gb memory, running on a solid state drive. That said, it froze on one occasion from which I was able to recover without losing too much time.

The good news is that the DCU opens Pentax RAW files very well. Furthermore, it can offer a quick processing solution using some 28 separate scene/image settings such as Bright, Natural, Landscape, Monochrome that that can set level for shadows and highlight, or take complete control for itself.

This is an important feature, as it essentially allows the user to reproduce almost any combination of in-camera JPEG settings after image capture.  You can thus also use the DCU to come up with a preferred JPEG preset for your camera.

Under its Laboratory environment, the program offers some 14 separate modules that can be docked, floated or moved around, including White Balance, Exposure/Tone, Lens correction, Noise reduction, Rotation/Shift, Color/Fine Tune and Cropping.

Many of its modules such as White Balance, Custom Image and Color correction are very effective and offer granular adjustments. Its white balance module offers four different ways to get your preferred image. It's fast and elegant, I found.

When I explored the Custom Image settings, I went for "natural". This seemed to increase the contrast a little and darkened the blacks.

I found its sharpness and noise settings worked well. However when I used the sharpness tool it seemed to drift in and out when viewed close-up on my system.

Cropping can be a pain

But its cropping tool proved hard for me. You can’t preview a crop until you save it as a JPEG or TIFF file. This means you have a greyed out area of your captured image to work with until you eventually save the file, (preferably as a TIFF 16-bit file) for later processing elsewhere, if needed. 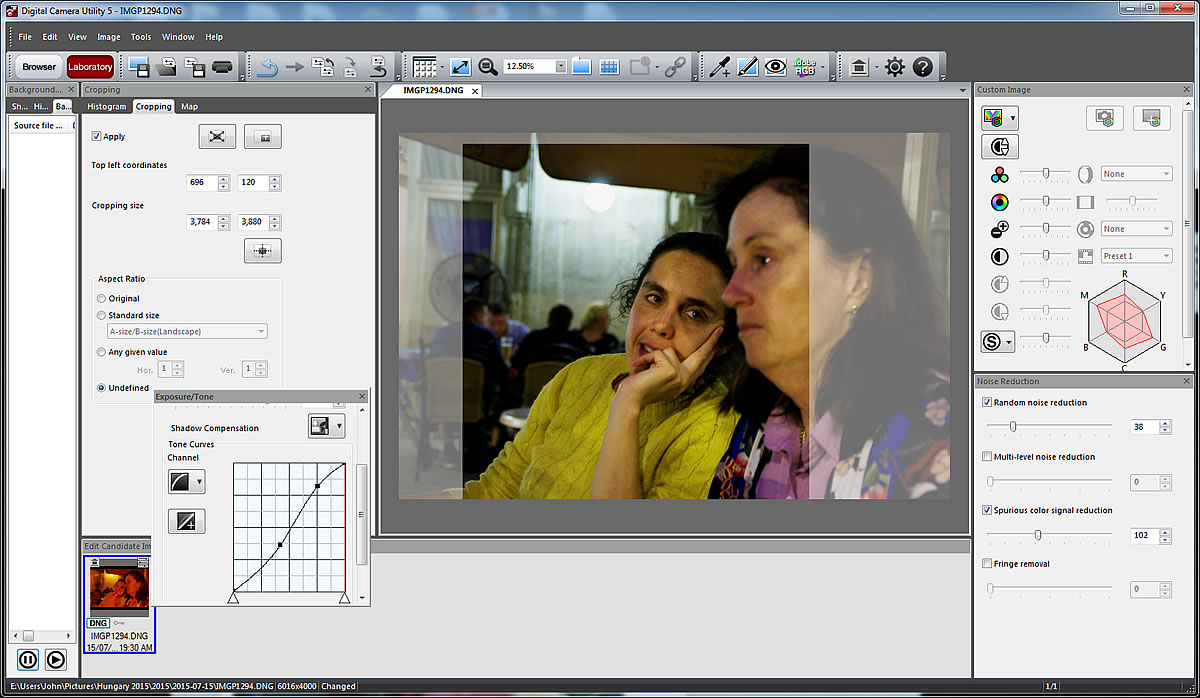 There are at least four separate discussion threads on the forum on this quirkiness with cropping. It seems you have to zoom in on the RAW file and edit with an awkward grey space that indicates what is cropped out. Surely, DCU5 could have employed a more interactive preview approach than that.

In addition, I missed having a masking tool for dodging and burning. Instead it offers a dynamic range option that affects the whole image. For example the image I was working with had a strong circular light that I would have liked to have toned back its glare.

I could get used to it but I found DCU5 inflexible and limiting for such small touch-ups. Also don't even think about using DCU5 to manipulate your JPEG captures. Most of its image customisation features  work only with RAW files. 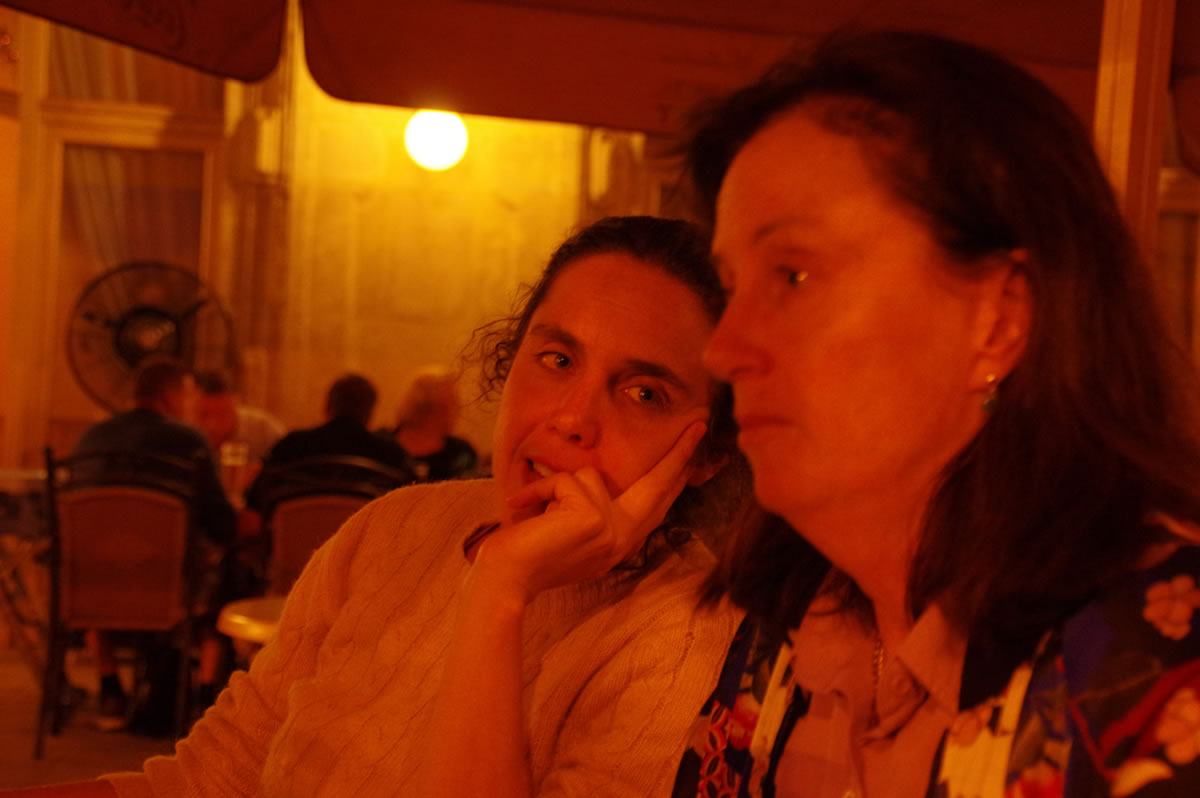 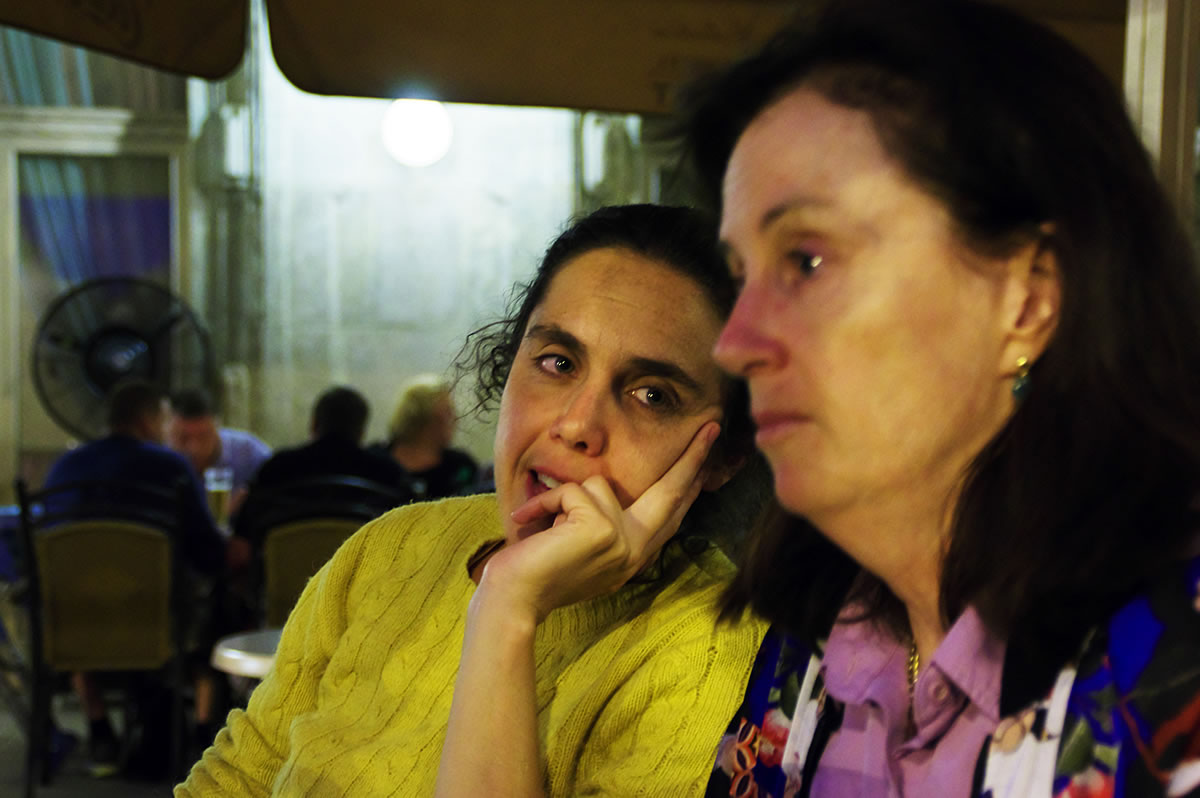 After a while, I got used to its approach. There's no reason to just rely on the one program for RAW processing, anyway. Once you accept its limitations and regard DCU5 as part of a larger workflow, then the program can takes its place as a specialised pre-processing software for later work.

For example, a YouTube commentator recently praised the software’s ability to pre-sharpen RAW files before loading them into Lightroom.

Something like that occurred to me after a while. 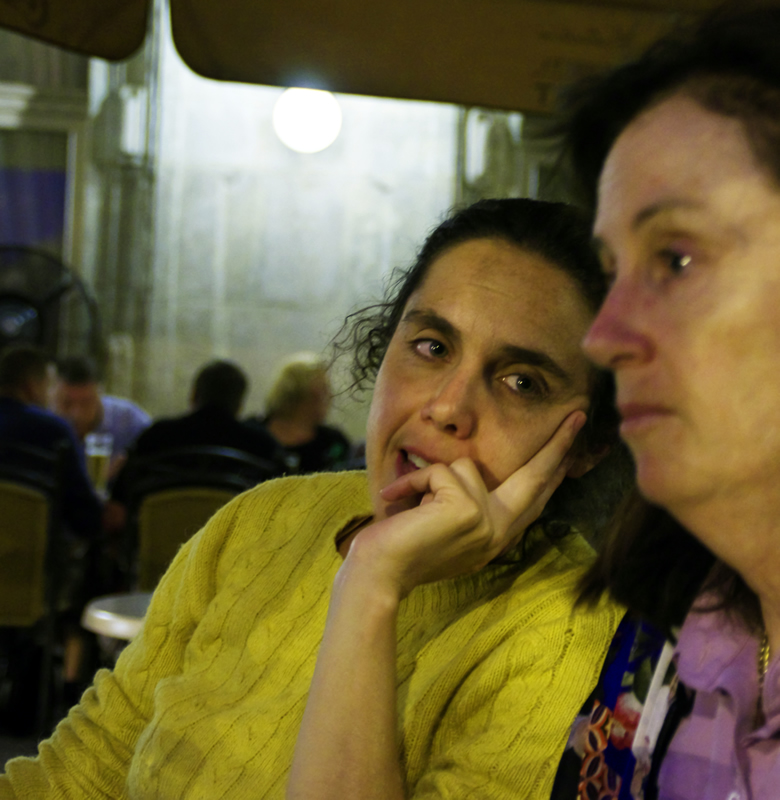 Results were good with its white balance, sharpness and noise reduction tools.

It is well named as Digital Camera Utility — not a complete solution. Once you get used to its clunky interface and lack of some features, it's good enough for most of your work. For those that want to get a feel for a workflow, a 2012 Mini Guide on the forum offers one approach to deal with its interface.

Its built-in help file, (function key F1 on Windows) provides a searchable inventory to using its disparate features, especially those hidden from its default set-up. While the DCU5 loads initially with a handy button on its toolbar for 100% view, you need to check its help file to learn about the buttons for enlarging and reducing the view. The hot-keys for this are Alt++ and Alt+-.

It also has features I've not touched on as well. It can save three RAW images that were combined into one file with HDR Capture, each as a separate RAW file. It can convert a PEF RAW file into a DNG RAW file. All this and it comes free with your Pentax kit.

In my case, I like to pre-crop for impact and image narrative. If its next version can make cropping more functional and interactive, with a masking solution for tone management, I’d be inclined to use it a lot more.