Everything you need to know about lenses for the K-1

Since the recently-announced Pentax K-1 is the first full-frame DSLR from Pentax, it's now a great time for us to revisit the subject of lens compatibility to see how things differ on the K-1 compared to APS-C bodies.  In this article, we will provide an overview of the various types of lenses that the K-1 supports.

Let's start with genuine Pentax K-mount bayonet lenses.  The most basic thing you need to know is that lenses in the Pentax D FA series are full-frame lenses optimized for digital bodies like the K-1.

DA lenses, on the other hand, are digital lenses designed for APS-C.  These lenses will generally require you to use the K-1's 1.5x crop mode, with a few exceptions that we will touch on later.

The K-1 will also work with any genuine Pentax K-mount lens from the film era without the need for an adapter.  That's about 200 lenses!  Only the oldest manual focus M and K series lenses have limitations in metering (they require stopping down).  Lenses from the A series support automatic exposure but still require manual focus.  The three remaining series— F, FA, and FA J— all contain lenses that will work with full autofocus and auto exposure support on the K-1.  Select FA series lenses even support in-camera lens corrections!  It should be noted that some of these FA lenses are still in production and are in fact quite popular.

Note that most of the aforementioned lens series contain * (star) lenses.  This affix denotes professional-image quality and construction.

Now, let's move on to lenses that require an adapter.  M42 and M37 screwmount lenses can be used as long as you have the appropriate adapter— a simple ring that converts the K-1's bayonet mount into a screwmount thread.  Focusing to infinity is retained.  Screwmount lenses are usable in manual and aperture priority mode only, and the diaphragm clutch (if any) must be set to manual. 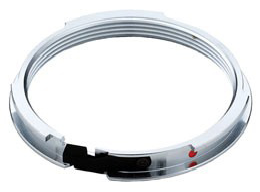 The M42 to K adapter is just a small ring

Related: how to use manual lenses (M, K, and screwmount) on Pentax DSLRs

You can also adapt medium format lenses. Pentax 645 mount lenses require the Pentax Adapter K for 645 Lens, or a third-party equivalent.  As this adapter is a simple tube, adapted 645 lenses will work just like screwmount lenses in the sense that their diaphragms are operated manually.  Focusing is also manual.  The same applies to Pentax 6x7 mount lenses, which in turn require either the Pentax Adapter K for 6x7 lens, or the aforementioned 645 adapter plus the Pentax Adapter 645 for 6x7 Lens.  Off-brand adapter equivalents are generally cheaper and easier to find, since none of these adapters contain any optical or electronic components.

645 lenses without an aperture ring (i.e. the DA 645/D FA 645 series) cannot be used as aperture control will be lost, and the aperture will remain at its narrowest setting.

Q-mount and Auto 110 lenses cannot be adapted since they are designed for very small formats.  And with that, we've covered all the different Pentax lens mounts!

Pentax DA lenses (and their DA L kit counterparts) are designed for crop bodies, but some cover the full frame image circle better than others.  We plan to test every Pentax DA lens on the K-1 and publish our findings in an in-depth review.  Until then, refer to the DA lens full frame test compilation maintained by the community.

As a rule of thumb, you can expect ultra-wide DA lenses such as the DA 14mm or DA 15mm to require crop mode.  The same would go for kit lenses like the DA 18-55mm.  Primes and zooms covering "standard" focal lens ranges are generally going to be less problematic.  For zooms coverage will almost always vary based on the selected focal length.  Refer to the thread above for information on specific lenses, and stay tuned for our upcoming tests for details. 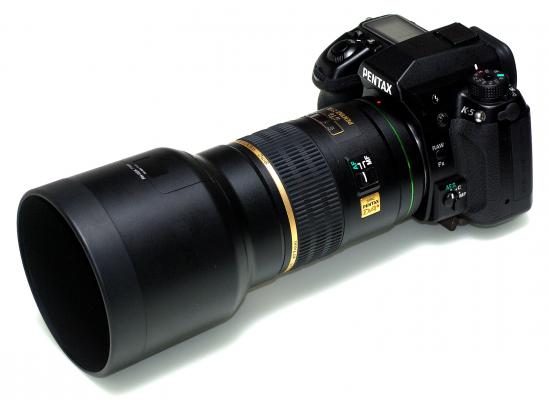 Certain DA lenses are actually based on film-era optical designs, such as the DA* 200mm F2.8 and DA* 300mm F4.  These two lenses, along with the DA 560mm F5.6, are actually officially supported by the K-1's full frame mode; the K-1 contains special full-frame lens correction profiles for these lenses in addition to the standard crop profiles used by all other Pentax DSLRs.  Full frame mode will still need to be manually activated for these lenses.

Finally, while they are currently not designated as full-frame lenses, we expect the DA 40mm and DA* 55mm to also perform very well on the K-1.  Should we find that their full-frame coverage is sufficient, we will update their status in our lens search system so that they show up in searches for full-frame lenses.

Before you purchase any DA lens for your K-1, we recommend that you research each lens thoroughly (dark viewfinder edges are the last thing you want to the surprised by).  If you have any questions, be sure to post in our lens forum.

The table below offers an overview of features offered by each Pentax K-mount lens series.  A complete listing of these lenses in available in our lens database, and a more elaborate version of the table is available here.

Note that the Pentax K-1 supports all type of Pentax autofocus: screwdrive, SDM, and DC. Also, FA lenses with power zoom contacts will support powered zooming and zoom retraction on the K-1.

Lenses that transmit their Lens ID also feed the current focal length for use by the Shake Reduction system.  Manual focus lenses require manual focal length entry at startup or via the camera menu.

All lenses with an aperture ring that has an "A" setting should be set to "A" at all times.  The aperture can then be controlled electronically.  The K-1 lacks the aperture coupler that senses the position of the aperture ring, so moving the ring away from "A" necessitates stop-down metering as with M and K lenses.  This behavior is identical on other Pentax K-mount DSLRs.

There are thousands of third-party legacy K-mount lenses that will work with the K-1.  It's harder to generalize here because each manufacturer uses different designations, but ultimately, the table above also applies to third-party lenses as long as you are able to identify the mount.  Be cautious as some third-party lenses may damage your camera— be on the lookout for the "KR" mount which is associated with the dreaded Ricoh pin. 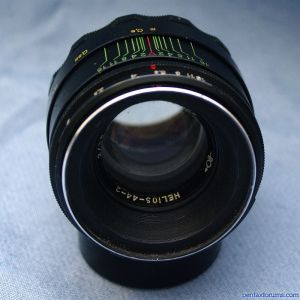 Third-party M42 and other adaptable mount lenses (i.e. Adaptall, T-mount, medium format) can also be used and will behave just like Pentax M42 lenses in terms of features and usage.

The Sigma 35mm F1.4 "Art" happens to be one of the sharpest 35mm lenses out there

Sigma DG lenses and Tamron Di lenses are designed for digital full-frame.  Sigma DC and Tamron Di II lenses correspond to the Pentax DA lenses and are designed to cover the APS-C image circle, so those should generally be avoided.  Samyang designates APS-C lenses as "CS" but does not otherwise have a specific term to indicate format.

Below is a list of third-party full-frame lenses that are in production for the Pentax K-mount:

Others (K or KA mount)

Know of a lens that's missing?  Let us know!

Can I Use Canon and Nikon Lenses?

Unfortunately, neither Canon EOS nor Nikon F-mount lenses can reliably be adapted to Pentax DSLRs.  Doing so would require an adapter with a "corrective element" which compromises image quality and alters the field of view.

There's an abundance of lenses available for the Pentax K-1, from current offerings to legacy glass.  At the end of the day, almost every lens ever made "for Pentax" will work with the K-1.  Limitations (if any) will vary based on the lens mount/series, as you've learned in this article.  The only lenses that can't reliably be used are those with third-party mounts that have incompatible register distances, such as modern Canon and Nikon lenses, among many other less common mounts.

We hope this article has given you a better sense of what it out there, what you can use, and what you should avoid for the K-1.  Further questions are always welcome in the Pentax K-1 forum.

Related: the history of the Pentax K mount