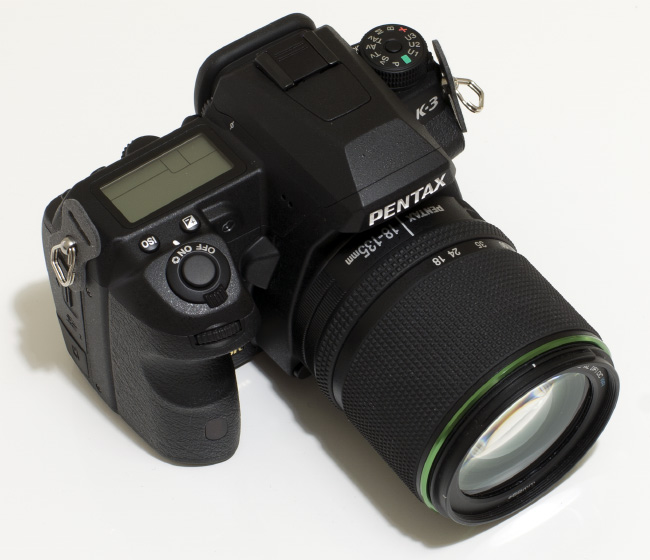 The Pentax K-3 started shipping on Thursday in the US, and many of our members have already taken delivery of the camera, as evidenced by the recent buzz in the K-3 forum.

Yesterday, we received our production copy of the K-3.  This means that we can finally start taking a closer look at this exciting camera!  We will of course do our best to offer you a definitive verdict about the K-3's performance in our upcoming in-depth review, which you can expect to see on our homepage within a week or two.

We will be sure to put the K-3 through its paces to find out just how big of an improvement it is over its predecessors, the K-5 II and IIs; considering that the core hardware found in the K-5 II is more than three years old, we have high expectations for the K-3— and based on our very first impressions of the K-3, we have a hunch that those expectations will be met!

For now, let's start off with an unboxing of the Pentax K-3.  We will follow up with a first impressions post once we've had enough time with the K-3 in the field.  Enjoy and stay tuned! 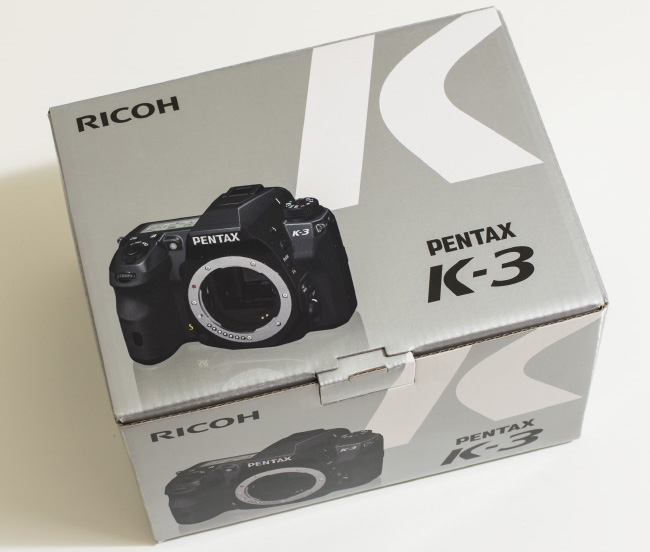 This first thing to notice is the prominent Ricoh branding on the box itself.  This reflects the recent company name change that took place: "Pentax Ricoh Imaging" became just "Ricoh Imaging" earlier this year.  We understand that some of you may not be happy with the new branding scheme, but this is how it's going to stay, at least for the foreseeable future.  Based on the new products that we've seen and commentary from Ricoh Imaging employees, Ricoh's acquisition of Pentax's imaging division seems to be a blessing.  Rest assured that the Pentax brand name will continue being used for all current and future Pentax DSLRs and lenses; our conversation with Ricoh Imaging representatives at PhotoPlus last week confirmed this. Whether or not point-and-shoots will be re-branded is another story that we will surely revisit soon.

At the end of the day, whether the box says "Ricoh", "Pentax", or "Hoya" isn't going to have the slightest effect on your photography, so this is the last time that we will be making mention of the K-3's branding.

Moving on, you'll notice that there's also a nice photo of the K-3 on the box, which adds to its overall appeal and will help differentiate body-only kits from lens kits. 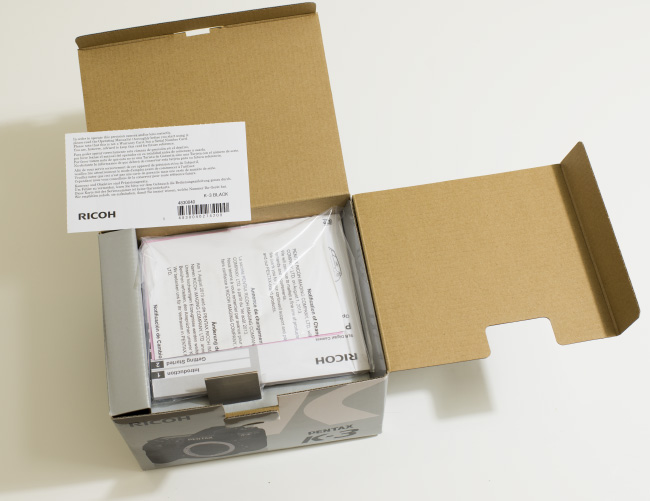 Upon opening the box, you will be greeted by the traditional serial number card, manual, CD, and other paperwork.  The duration of the warranty varies from country to country: in the US, it's good one year, in Canada and Europe, it's good for two. 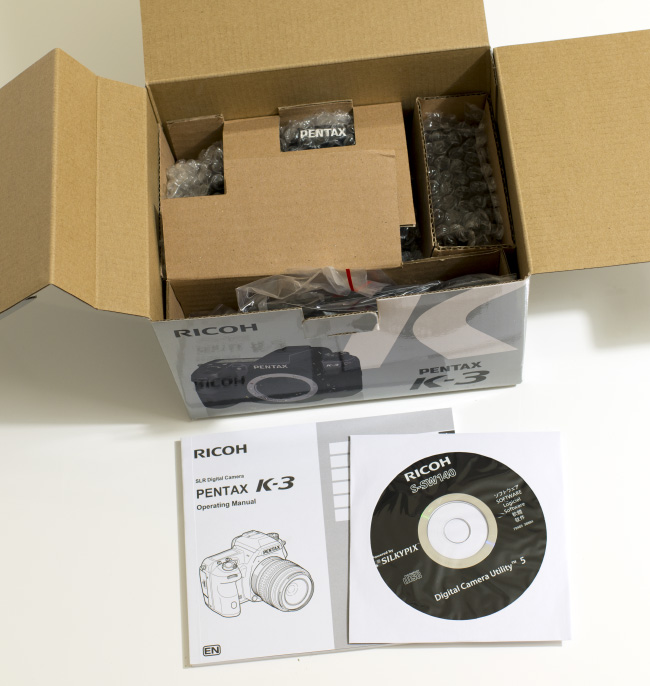 The box itself isn't crowded as earlier models, which makes it easy to re-package the camera if needed. 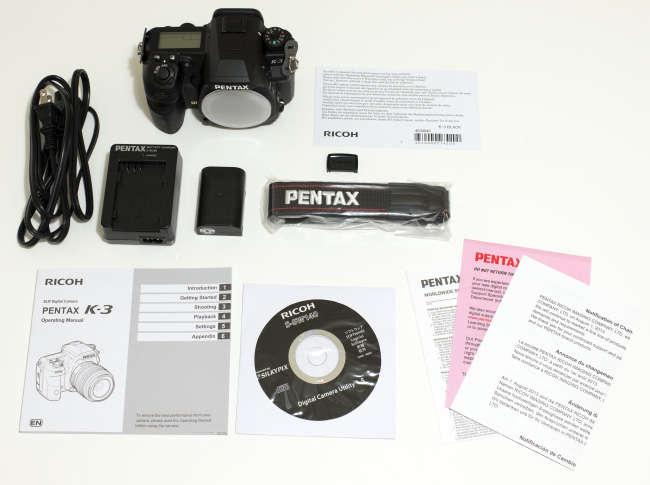 Inside the box, there are no real surprises.  The included accessories (manual, CD, charger, battery, strap, viewfinder cover, hotshoe cover, paperwork) are the same as those included with the K-5 II and IIs.  One thing has been removed, however: the AV cable is no longer included (who used those anyway?).  It's a shame that no USB cord is included, as this has started becoming the norm among other manufacturers. 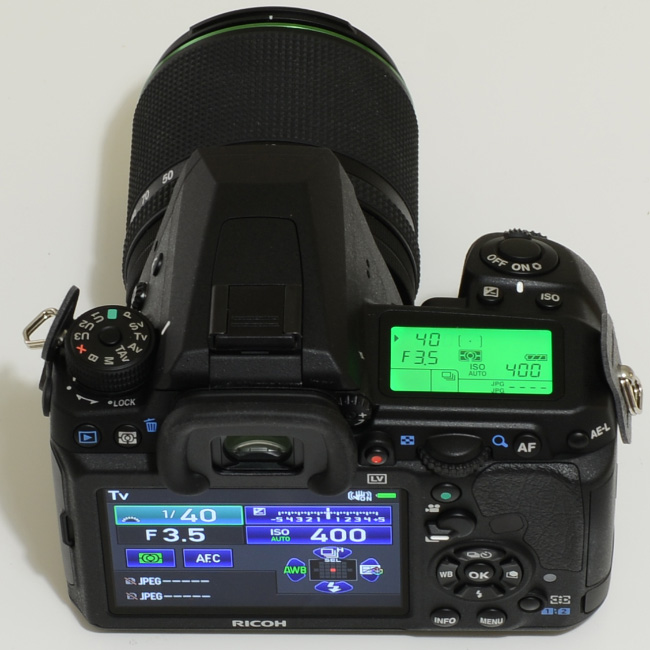 And that concludes our unboxing.  Now it's time to take the camera out in the field, take some pictures, and see what it can do!

We'll be sharing our impressions of the K-3's interface, image quality, and handling very soon.  Stay tuned for our first impressions!

In the mean time, to learn more about the K-3, check out these resources: