Which lenses are used the most, and on which cameras?

Have you ever wondered which lenses are used the most with various Pentax cameras?  Well, today we've put together a chart that answers this question! Click here to view the Pentax Lens Usage Statistics page.

Once you're on the page linked above, you can hover over any cell to view statistics for the corresponding camera/lens combination.  Warmer colors in the chart correspond to higher frequencies, while colder colors correspond to lower frequencies.  The data presented in the chart is based on 80,000 photo uploads on our forum.  The final data set was reduced to about 20,000 photos, as all that didn't have both camera and lens information were removed.  The data has also been normalized, which means the colors correspond to proportions rather than absolute frequencies.  Cameras with fewer than 400 total users are not included in the chart, nor are lenses with fewer than 90 users.

The charts are based on user count, not photo frequency, so multiple photo uploads on the forum do not skew the data.

We also decided not to include manual lenses on the main chart because of their overwhelming frequency: they account for about 25% of all camera users in our data set.  We did plot this separately, however: 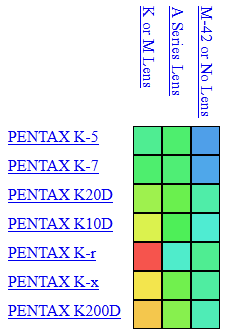 Interestingly, the Pentax K-r, K-x, and K200D had the highest K/M lens frequencies.  In addition, the plot suggests that older (i.e. second-hand) DSLRs are paired more frequently with manual lenses.  Finally, despite their low cost, M42 lenses are nowhere near as polular as manual K-mount lenses.  In the plot above, n=383 for M42 lenses and 1311 for K, M, and A lenses (where n is the number of users).

From the main plot you can also observe that Pentax enthusiast DSLRs (the K-5, K-7, K20D, and K10D) have a much more diverse array of popular lenses, while the remaining intro-level DSLRs tend to stick to kit lenses.

As would be expected, the K200D and K20D see the most extensive use of the "mark II" 18-55mm kit lens, which was released at around the same time as those two cameras.  The K-7, which could be purchased with a weather-sealed version of the same lens, sees much lower use of the other 18-55mm's.  Finally, with the debut of the Pentax 18-135mm (arguably one of the most versatile lenses currently available), many users were drawn away from the 18-55mm lens altogether.

Here is a list of the top Pentax lenses, and the associated raw user frequencies:

To learn more about these lenses, please visit our Pentax Lens Database.

Similarly, to learn more about these cameras, please visit our Pentax Camera Database.

We hope you enjoyed looking at this chart!