How prone are Pentax SDM lenses to autofocus failure? 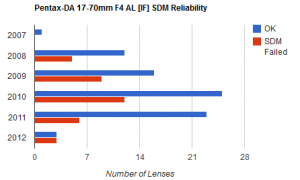 Several months ago, we asked our members for feedback on whether or not the autofocus motors in any of their Pentax SDM lenses had failed. Now that some 1,500 data points have been collected, we've closed the survey and are ready to summarize the results! You can also view the raw results here.  For each lens, members provided us with the purchase date and reported whether or not it failied.

This particular survey involved all Pentax K-mount DSLR lenses with silent focusing technology, as listed below:

Before analyzing the survey results, we eliminated erroneous entries based on the submitted comments and purchase dates.

We'll start with the good news: according to the survey, the majority of SDM lenses are not prone to autofocus failure, which is surely welcome news for Pentax lens owners and photographers considering the Pentax system.

For the Pentax DA 18-135mm lens, not a single failure was reported from among the 97 lenses submitted.  No other lens had a perfect track record, but nevertheless, several other lenses did quite well:  the DA* 200mm only had 1 failure out of 59 copies, while the DA* 55mm had 3 out of 84, the DA* 300mm had 8 out of 120, and the DA* 60-250mm had 6 out of 107.  If we were to convert these failure rates to percentages, they would all be in the single-digit range, which we believe is nothing to be concerned about when deciding to buy a lens.  All Pentax lenses come with a 1-year warranty, and if a manufacturing defect in your copy is discovered, your lens will be repaired free of charge.  Design defects are what one has to be wary of, and we believe that the aforementioned lenses fortunately have none!

An open question that remains to be clearly answered by Pentax is why the "DC" focusing technology found in the 18-135mm has not been used on other lenses, seeing how reliable (and fast) it has proved to be.

What is a little bit more alarming is the fact that three of Pentax's most popular lenses seem to have problems with SDM reliability.  There's more than one possible explanation for this.  For example, these lenses could see more use than the others or they could have a design flaw which affects the autofocus system.  We cannot make any conclusions in this respect without further analysis.

Based on the results, it also doesn't seem that newer copies of the lens are failing less than older ones.  This was a key thing we wanted to analyze through this survey, and we are disappointed to see a lack of improvement in this respect.  You may wish to view the raw data to obtain more insight into this.

Their AF problems aside, all three of these lenses perform well overall, and you may want to read our in-depth reviews and user reviews to learn more about them! If you're frightened by the AF issue, then Sigma has readily-available alternatives to all three lenses: a 17-50mm, 50-150mm, and 17-70mm.

To sum things up, the three main conclusions that can be made are:

*Despite the relatively large sample size, due to the likelihood of response bias, these figures should be treated as relative measurements rather than an absolute failure rate