Do I have the 'Zeiss Planar Killer'? 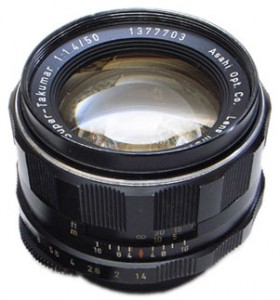 Pentax is known for its rich history of excellent and industry leading optics. However, being on top of the industry generally means you'll have rich competition!

In the 1960's, when the M42 screwmount was in its heyday, Pentax and Zeiss were battlin' it out for the prestigious bragging rights of having the best commercially available optics.

Notably, we had the Zeiss Planar 50mm f/1.4 and at the time it was regarded at legendary status for it's sharpness and optical performance. Pentax response was to produce a lens that would exceed Zeiss's impressive reputation no matter the costs: enter the Pentax Super-Takumar 50mm f/1.4- designed to be the 'Planar Killer'!

Rumor has it that Pentax actually took a loss with each sale of this 8-element lens just for showmanship and elbow Zeiss in the marketplace and jockeying for position! However, with the obvious financial risks involved with this competition, Pentax eventually replaced the original 8-element design with a more affordable 7-element design.

While both lenses certainly perform admirably, the reputation for the original 8-element version persists leaving a 'cult-classic' fan favourite lens in its wake.

In this PentaxTips video, we discuss how you can discern between the 8-element and 7-element variations of this lens.

Pentax Spotmatic: What is the Bridge Circuit?