A photo editor for all seasons - and platforms 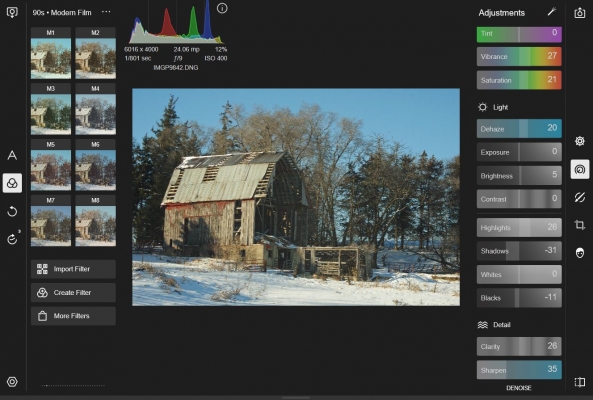 Adobe’s Lightroom/Photoshop combination are the undisputed market leaders in photo editing and organizing on the desktop. Both are extremely powerful and versatile, have a devoted following, and online tutorials and enhancements are legion.

Sometimes, however, that kind of power is overkill. Increasingly, photographers are editing on the go with a phone or tablet, and posting straight to an online service like Instagram. Adobe has recognized this change and has fielded mobile versions in response, but their caution in this space - and their insistence on a Creative Cloud subscription for full functionality - has opened up the field for other, more nimble competitors. The app stores of MacOS, iOS, and Android are filled with ambitious editing applications, many of which give Lightroom Mobile a run for its money.

Polarr Photo Editor (or, more simply, Polarr) is one of these.

Polarr, published by the artificial intelligence startup of the same name, was launched in 2015 as a browser-based photo editor. Versions of Polarr are now available on every major computing platform - Windows, Mac, Linux, iOS, Android, and ChromeOS. The program made Apple’s “Apps of the Year” list in 2015 and 2016.

The touch-centric interface, while not precisely the same across platforms, share a very similar design language, so that moving from one to the other is relatively low-friction. Here's Polarr on Windows 10 as a Universal Windows app, and Polarr on iPad (iOS). Included in both interface versions is a live histogram display, which is often an essential aid in knowing how well you're using the full dynamic range of the photo, or whether you've overloaded things on the dark or light end. The histogram can be toggled on and off as needed. This is a feature often overlooked in mobile photo editors.

Polarr also handles Adobe DNG RAW files, although (subjectively speaking) the software does not appear to leverage the full dynamic range that a RAW file offers, and lags noticeably behind Lightroom's capabilities (both desktop and mobile). As a JPEG editor, as part of a moble-editing workflow, the software provides a credible, relatively full-featured alternative to desktop editing.

There is a free version of Polarr, with a decent set of tools and filters (think Lightroom presets) available. This can be accessed via the browser-based version, or downloaded from the respective app stores as needed. (For Linux users, follow the appropriate link on the website to the GitHub repository.)

For now, a “Pro” version of Polarr can be had for $19.99. This version adds denoise tools, spot removal, batch resizing and renaming, various masks, and more than 100 additional filters. These tools, like those in the free version, are generally well-implemented, although the spot removal tool can be difficult to control by touch, and may be confusing to those coming from a Lightroom perspective.

Polarr is heavily invested in helping users learn the software. Numerous in-app "guides" (see example, below) provide the user with hands-on assistance, and there are a series of 10 company-created YouTube tutorials on basic functions. In addition, the Polarr Wiki offers a variety in-depth articles on tools and customization.  It is a refreshingly user-centric approach. 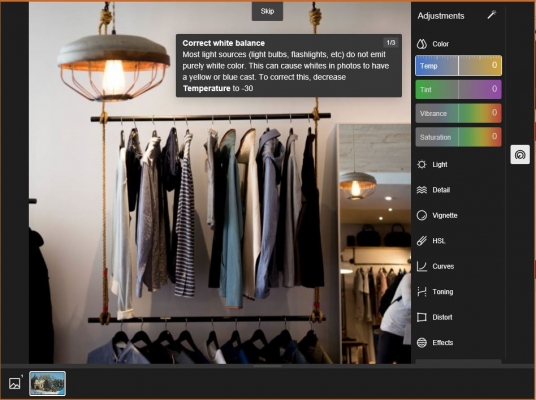 The software is user-centric in another important way - at least for now: the one-time “Pro” unlock gives you these features on every single platform - no paying twice for iOS and MacOS, for instance.

It should be noted, however, that Polarr announced in December they will be moving to a subscription-based system in early 2018. Just last week, Polarr informed its installed base - via an in-app message - that this change will come in April, with the launch of Polarr 5.0.

Those who buy Pro before the transition will not be affected - their cross-platform licenses will still work as they do now - but future users will be paying a monthly fee for Pro features. An inquiry to Polarr regarding the date of the transition did not receive a response as of publication.

A basic overview of Polarr’s tools and capabilities will appear in part 2 of this series.