In the early morning of April 15th the moon will acquire a reddish hue as we observe a total lunar eclipse lasting several hours.  This rare event will make it a great night to go out and capture stunning moon photos with those telephoto lenses, and possibly moonscapes, if you get lucky!

According to NASA, the the moon will start changing color at 1:58 a.m. Eastern Time (GMT-4), as it enters the Earth's Umbra, or shadow.  It will become the so-called "blood moon" by the 3:07 a.m., once it is fully engulfed by the shadow, and this will continue until approximately 4:24 a.m., when the process will begin undoing itself.

Although one would normally expect the moon to become invisible while it's in Earth's shadow, our atmosphere refracts some sunlight into the shadow, which is then scattered, ultimately resulting in a perceptible red hue.  A similar effect reddens the sky during sunsets.

While lunar eclipses are quite common, total eclipses featuring a red moon are rare, as we need to be lucky to get the Sun, Earth, and Moon to line up properly.  This time around we're super lucky, as similar eclipses will take place on October 8th of this year and April 4th and September 28th of 2015.

Read on for some lunar photography tips to help you get the best moon photos tonight.

In the hours leading up to and following the color change, parts of the moon will be darkened by the outer portion of the Earth's shadow known as the Penumbra; this can also make for interesting photographs.  If you're in an area from which the eclipse can be observed, you might want to shoot a time lapse illustrating the various phases of the phenomenon (Pentax DSLRs have a built-in feature for interval shooting, making this easy).

This particular eclipse will be fully observable from North America.  Countries in the Pacific will be able to catch the second half of the eclipse, though Europe is mostly out of luck as the moon will be setting at the time of the eclipse. 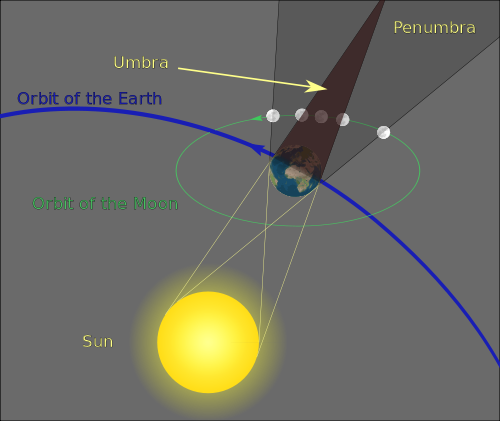 To conclude, we wanted to give you some tips for photographing the moon.

If you want to take close-ups of the moon, we recommend using a 300mm lens or longer on APS-C cameras.  Shorter focal lengths will require considerable cropping, reducing the resolution of the final product.

The most important shooting parameter to consider is shutter speed.  Even though it might appear to be stationary, the Moon orbits the Earth at about 1 kilometer per second (2300 mph) as the Earth revolves on its own, so we need to use a fast shutter speed to avoid motion blur.  This also helps mitigate any instability in your tripod. The longer your focal length, the faster you'll want your shutter speed to be.  We recommend a minimum of 1/125s, though anywhere up to 1/750s may be appropriate depending on your setup. Once the eclipse is in full swing, you will need to reduce the shutter speed considerably, however, and at this point stabilizing your rig will be key to getting successful photographs.  Using your camera's self-timer or a remote with mirror lock-up is a must.

Your aperture should be the widest setting at which your lens delivers acceptably-sharp photos, ideally around F4 or F5.6, if not faster.  Wide-open is often the way to go.  Set your ISO as low as possible without underexposing by more than a stop or two, and be sure to shoot in RAW to take advantage of your sensor's full dynamic range.  Don't be too tempted to push the ISO to a point were details won't be visible, as shadows can still easily be recovered when underexposing at a lower sensitivity.

Since the moon is very far away, you won't be able to take advantage of the DOF benefits of stopping down.  Thus, it is of critical importance that you nail the focus.  Manual focus will almost always be required, and we recommend using live view to magnify the image and ensure that the moon is in focus.

Because you are essentially trying to optimize three variables while keeping your setup perfectly steady, a bit of trial-and-error may be required.  It is also a good idea to repeat the same exposure a few times to reduce the likelihood of accidental camera shake.  We therefore suggest practicing a few hours before the eclipse (if possible) to avoid missing the moment later on.

If you have a mirror lens, give it a shot: lunar photography is one application in which mirror lenses with extreme focal lengths come in very handy. But mirror lenses tend to have slow apertures, so if you can't get the exposure right at F8 or F11, it may be better to use a shorter lens with a faster aperture.  The latter will be especially true once the moon is fully engulfed by Earth's shadow.

For those of you planning to shoot a time lapse, it's important to find an open space from which the entire motion of the moon can be observed.  You may want to shoot two sets of photos: one exposing the moon correctly, and one with a longer exposure for the background.  The photos could then be combined or stacked as you see fit.

Got any more lunar photography tips?  Share them in the comments section below!