T-stop vs. F-stop In a Camera Lens

Two measures of the light that passes through a lens

The recent announcement of the Samyang 50mm lenses for both still photography and cinema gives us an opportunity to explore a concept few photographers are familiar with: the T-stop.

What is a T-stop?

Most photographers are very familiar with the F stop, which is the ratio of a lens's focal length versus the size of the entrance pupil (think of it as the front element), such as F1.4, F2.8, F5.6, etc.  This number gives us a good measure of the amount of light passing through to the camera sensor. However, the F-stop does not take into account the inevitable losses as light passes through the lens. Due to reflections on various glass surfaces, absorption, and scattering from the glass, the actual amount of light that arrives at the sensor is slightly less than in theory. Because of this, the F-stop is not an accurate measurement of the light transmitted by a lens. Two lenses with identical F-numbers and focal lengths might not yield precisely the same exposure because their transmittance can differ.

The T-stop (Transmission Stop) is thus simply the F-stop adjusted for the lens's light transmission efficiency.  Think of it as the "true" F-stop. In other words, the T-stop takes into account the fact that no lens is perfect.  If a perfect lens with 100% light transmittance were to exist, its T-stop and F-stop would be identical. On the other hand, a lens having a transmittance of 75% with an aperture of F2.0 will have a T-stop of T2.3. Even with the best lenses (having transmittances above 90%), the T-stop will always be slower than the F stop.

Knowing the T-stop is of particular importance in cinematography. The reason for this is that in a video, multiple images are viewed in rapid succession, so even slight exposure variations will be apparent. On the other hand, photographs are seen one at a time, and marginal differences will not be relevant.

Samyang is a Korean lens manufacturer offering compelling manual focus lenses with high optical quality and comparatively low prices. The company recently announced a new 50mm lens to complete its lineup of fast prime lenses. The lens comes in two variants, one specifically for photographers, named the 50mm F1.4 AS UMC, and the other designed for cinematographers and labeled 50mm T1.5 AS UMC. Optically the lenses are the same, but the cine version gives us more information about the actual light transmission capabilities of the glass.

The cine version of the lens is currently available for $550 (excluding the Pentax mount) and the photo version will be available later this year for Pentax K-mount in addition to the other mounts for the same price.  The latter was officially announced just a few days ago.

Other Samyang lenses can be viewed in our lens database. 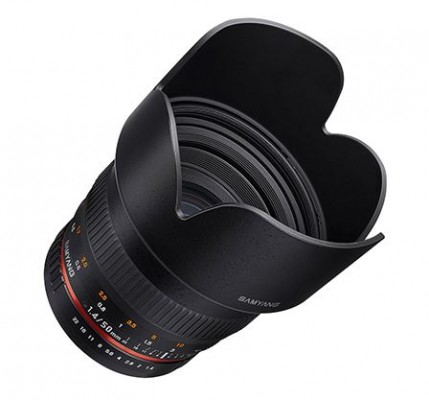