Field of View vs Focal Length on various formats 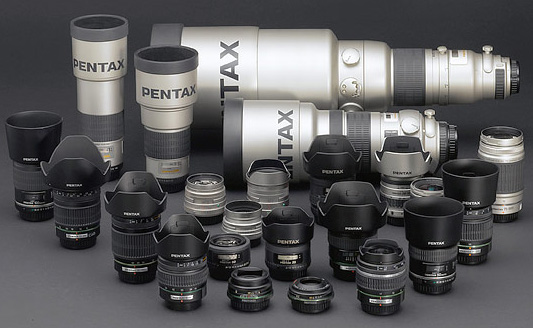 Many of us have cameras with different sensor sizes; this raises the question of which lenses need to be used to get the same field of view on two different formats. Below we provide a table listing focal lengths with equivalent Field of View (FoV) across several sensor sizes.  The actual diagonal field of view (in degrees) is shown on the far right. Click the table to enlarge. 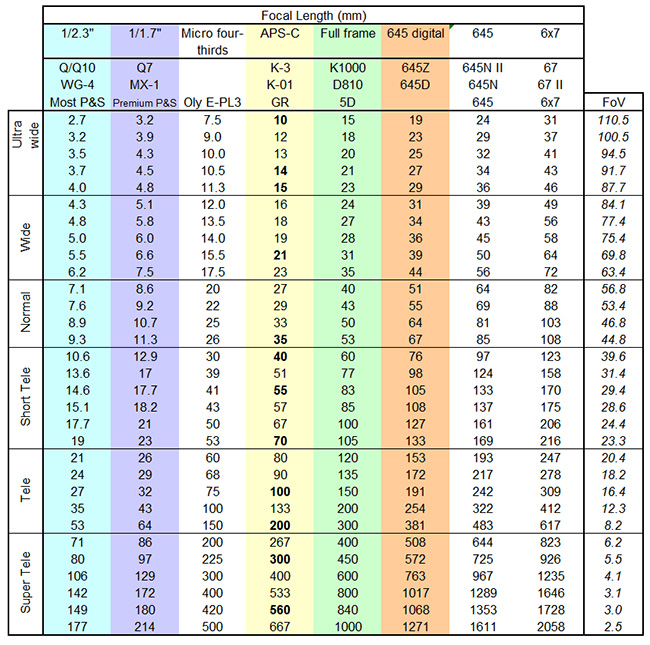 Note that the focal length of a lens (say 50 mm) is an optical property of the lens and remains the same no matter what sensor size camera the lens is mounted on.

In other words, an smc Pentax-A 50mm F1.7 lens as shown to the right is a 50 mm lens when mounted on a Pentax Q7 (1/1.7 inch sensor size), on a Pentax K-3 (APS-C sensor size), or on a Pentax film SLR (aka 24 x 36 mm or full frame). The focal length does not change with the camera. But the field of view which the lens captures does change. And so does depth of field, but that is for another article.

Anyway, it is common to relate the focal length of a lens/sensor combination to the full frame format so that the lenses better can be compared regarding their field of view. The concept of "equivalent" focal length is thus actually quite useful.

Read on for some background on the origin of the somewhat confusing "crop factor" term.

Let's pretend that the above image was formed by the afore mentioned full frame 50 mm lens. If mounted on a camera with a 24 x 36 mm (full frame) sensor only a 24 x 36 mm large part of the image would be captured:

With the same lens on an APS-C camera we can only capture an area 16 x 24 mm which is the size of the APS-C sensor:

It gets interesting when we compare the two images captured:

It looks like the magnification of the APS-C image is higher; it appears as if it is captured with a telephoto lens when compared to the 24 x 36 mm image, even though the same lens was used for both images.

While the 50mm lens does not actually deliver more magnification on an APS-C camera, it does have a reduced field of view, and this gives the illusion of "more zoom" when comparing the relative sizes of objects within two images.  This illusion only manifests itself when the two images are scaled to the same size, but this is quite common as you can imagine.

The diagonal field of view on APS-C is 1.5x smaller than full frame and this number is what is called the "crop factor". This unfortunate term stems from the fact that the APS-C sensor captures a smaller, or cropped, part of the image circle as illustrated in the previous section.

At the end of the day, there is one and only one implication of the crop factor: the field of view is narrower on APS-C compared to full frame given the same lens.

The main thing to take away from all this is simple: larger formats are better-suited for wide-angle photography, while smaller formats make telephoto shooting easier, as they don't require monster lenses for the same tight field of view.

The animation below shows the effect of the crop factor.

Aperture is a constant for each lens, so regardless of the format you're shooting, you'll get the same light transmission (i.e. exposure) with the same lens.  Thus, there is no benefit in using larger-format lenses on smaller sensors as far as exposure goes.

Some say that larger sensor formats can offer "better" bokeh.  This is true in the sense that it's easier to obtain a strong background blur with larger formats in typical shooting scenarios, since longer focal lengths deliver wider fields of view than they would on smaller formats.  Recall that as focal length increases, the depth of field decreases and thus it's easier to obtain a background blur.  It is therefore advantageous when longer focal lengths can still deliver a relatively wide field of view.

This is easier to understand through an example: on a Pentax Q, one would need a 9.3mm lens to get the same field of view as a 35mm on an APS-C Pentax K-3.   At the same aperture setting and focusing distance, the photo taken with the K-3 would have considerably shallower depth of field.

If you were to mount the 35mm lens on a Pentax Q, you would in fact get the same background blur as with the 35mm on the K-3: but you'd only see a fraction of the frame, as your field of view would be a mere 12 degrees, rather than 44!

We'll touch on one last concept before letting you go: distortion.  This is a relatively advanced concept, but it can still have an impact on your photos.

Suppose that we have a full-frame camera with a 50mm lens and an APS-C camera with a 33.3mm lens.  Images shot with both cameras will have the same field of view, and we'd like to shoot some portraits. Will they look the same from either camera?

At first sight, the images might look the same.  But if you look closer, you might see subtle variations in curves and edges caused by the lens's geometric distortion.  The wider a lens, the more likely it is to require a more complex optical formula.  This can lead to distortion, particularly near the edges and corners of the image, that might not be present in a simpler (or more expensive) lens.  When distortion manifests itself, lines that are straight in real life will appear curved in your image.

Distortion is unwanted in a variety of applications, including portraits, product photography, and architecture.  While it can usually be corrected in software, this comes at the expense of time and can result in a reduced field of view or in a loss of detail.

On an unrelated note, distortion can also be caused by the perspective: i.e. where you are standing and what lens you're using. We invite you to continue on to our in-depth guide on perspective distortion to learn more.