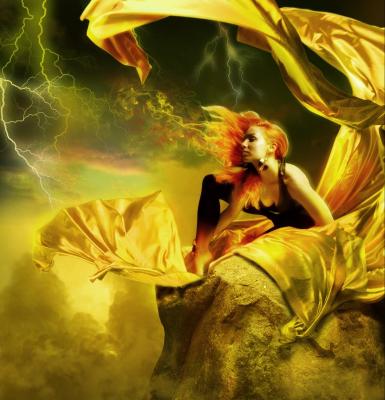 Earlier this year, we held a contest that offered 5 copies of ArcSoft's noise reduction software. Because of the popularity of that contest, another was held here at Pentax Forums over the summer where a chosen five would have their pick of three different programs: Portrait+, Photo+, and Panorama Maker. We are honored to announce the five winners of that contest!

"I took this photo of my friend, Elisa, and the movement of her hair is due to the rapid movement of her head - we didn't use fans. The photo of the drapes was while my assistant shook it, requiring about 50 different shots, of which six were selected for the collaboration. I used Photoshop for the model, drapes, and the rock, as well as the color management. Before the final touches of shadows were added in GeniuX Photo EFX, Photoshop was used for the lightning bolts and smoke."

"It was a gorgeous sunny day (a rare event in the UK, in April). Bitterly cold, but nevertheless, a lovely and clear picture of the Wayside Cafe with the moor behind. The cafe is in Widecombe-on-the-Moor, in Dartmoor, Devon, UK. Just a shame that modern technology (the cables) runs in front of the 100-year old building, spoiling the view of the cottage and of the moorland behind. Most photos (including those of the Cafe web site) are taken from lower down to lessen the impact of the cables but I wanted the view behind the Cafe as well, so I stood my ground and decided that the cables just HAD to go! I spent an hour or so carefully tinkering with the clone-and-heal function in FastStone to remove the cables across sky, grassland, hedges, chimneys, a slate roof and trees. The result is picture-postcard perfect!

"I just hope you all agree!"

"This picture is of a unique glass wall on a building in Riyadh, Saudi Arabia. I am working here for a short time. The glass is set at varying angles, and there is a dirt car park with rubbish and cars on it immediately in front and there are buildings beside it. Some glass panes have fallen out and left holes that add to the overall abstract view. The whole thing is a marvelous architectural abstract with reflections of varying points of the surroundings. The picture was taken on a day with the air full of dust and no blue sky visible through the dust. The glare was high and hard on the eyes. So the sky appears just non-existent. The picture is not perfectly straight and appears lifeless straight off the camera. My challenge was to take this dull view and turn it into something resembling art...

"There was some experimentation but the end result was this... I initially imported the RAW file into PS Camera Raw. Adjusted the exposure +0.5 stops brighter to offset the dullness a little. Increased vibrance 20% and adjust saturation 30% to provide some life given the dullness I had straight out of the camera. I opened the picture into Photoshop from that point. I removed the dust bunnies (clearly it is time to clean the sensor once again). Selected auto tone, auto contrast and auto colour. I find the presets quite useful as a start point for these types of pictures. Auto colour brought back some dullness so I backtracked. Resized the picture to 300 dpi for print size. Straightened the slight crooked angle on it and cropped as shown in the 'After'. Used high pass sharpen to 5 pixels. I usually use only 2 or 3 but this pictures appeared better at 5. Brightened and dulled the picture using a 'Hollywood Highlights' action I learned in a course. Flattened the layers. Saved the picture at full size and full quality. Then I resized it to 1000 pixels to show off to my friends. You can see the before and after at 1000 pixels here, all beginning with my trusty old *ist-D camera which I bought new when 6MP was really awesome. And I really like this architectural abstract I have made!!"

"This was one of those shots you take that you'll never be happy with. If I can be accused of anything over my few years in photography it has been that most of my shots are underexposed or soft or at least have that look to them. Anyway, I was not happy with the colours. The original is a straight JPEG export from RAW and the histogram suggests a leaning to the left - OK, point proven but it just seems muted, sharpness is ok, out of focus areas are nicely blurred and not a distraction.

"This is a living flower - growing in a garden and I was not going to pluck it for a shot. I am using Lightroom 4.4 and in trying to give the shot some life or bite I tried the following. Vibrance, which seemed to bring in a yellow cast in the just OOF area. White Balance changed to Daylight, which improved the greens but made the green in the top left become too obvious...

"I then adjusted the temperature upwards by 429, pulled back the Red Hues by -11, and pushed the Black Clipping by +100. But still there was a hint of yellow just off centre where the two pink / red leaves overlap. I then stood, up walked away and made myself a cup of tea. Coming back, it was improved on the original but it felt just like another flower shot. Wanted something more interesting, so I went through the presets, and Aged Photo had something about it. Pulled back Red Luminance by -31, Red Saturation by -1, Red Hue by -100 and then reversed the Red Luminance Pull by pushing it +49. Low and behold, 'Yesteryear' is born."

"This is one of my favorites from a two year assignment in Korea. Brings together the traditional temple architecture as well as the natural beauty of the mountains in the "Land of the Morning Calm!" This image was created using Nik Software HDR Efex Pro 2 imported from Lightroom 4.3. Its a fantastic way to combine three exposures and really bring out a great shot, and it's very fast and easy to do. I selected a strong enhancement to the colors to help bring back some saturation lost due to the overcast day then balanced the final exposure towards the -1 stop image, bringing back highlights while creating the HDR image. Additional dodging and burning in Lightroom with some additional sharpening and contrast control as well. It's wicked fast to do this in Lightroom as opposed to taking it over to Photoshop. It also makes life so easy to go back and adjust previous changes since all work is done in meta data and does not mess with the original image. Also, it allowed me to keep all the images in the same folders and so I could to retrieve them easily when needed (like for really cool photo contests....).

"This picture is from Seoraksan Mountain area (East Coast) of South Korea. No tripod, but wish I had to have been able to stop down a bit more for better sharpness. An overcast and rainy day, there was very low contrast and light overall. But it seems this picture did get blessed with a bit of sunshine to bring out some color to an otherwise overall drab day."