Announcing the winners of our September, 2017 contest 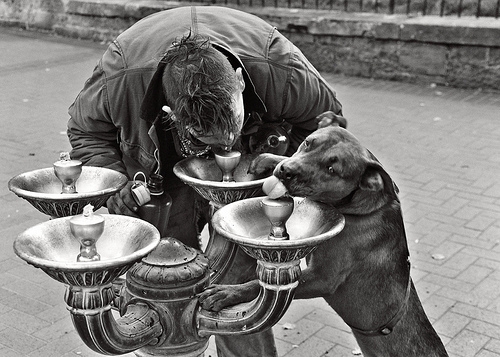 It is our pleasure to announce the winners of our September, 2017 "Humor Me!" photo contest! In first place was forum member kiron Kid from USA who captured "Drinking Buddies" (pictured above). This photo was shot with a Pentaz ZX-30 and an smc Pentax-FA 24-90mm F3.5-4.5 AL [IF] lens.

There is not much to say about the winning Photo, says kiron Kid: "I was street shooting and I just responded to what I saw. I shot it on Fuji Neopan 400 film. It is a straight scan from the negative with little or no post processing. In case you're curious, I still mostly shoot film."

Our runners-up were forum member pschlute from UK in second place with "Share the Joke, Missy" and tgchan from Poland in third place with "Fruity Family". Click on either thumbnail for a larger version.

We'd like to congratulate the winners and also thank everyone who participated or voted! Also, be sure not to miss our current photo contest. Read all about it in the monthly contest forum.