Forum member Kresica has won our official January "Rivers and Lakes" photo contest, making this his fourth triumph to date!  Click on his snow-covered waterfall photo below to enlarge it: 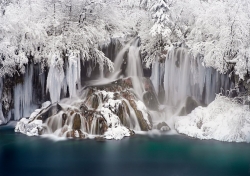 This photo is now also being featured in our Premier Gallery, in which you are welcome to leave comments.

Don't forget to enter in our February "Birds" photo contest for a chance to win an $50 B&H gift card!  The current contest ends at the end of the month (the 29th, remember that it's a leap year!). Read on to view the runners-up.

The second- and third-place photos were submitted by members Alcazar and Avio and both are being featured in our Winners' Showcase.

The poll for our current contest will be posted at the beginning of March.  Stay tuned!