The Making of "Car of the Newlyweds"

The winning image in our "Wrapped, Covered or Packaged" photo contest 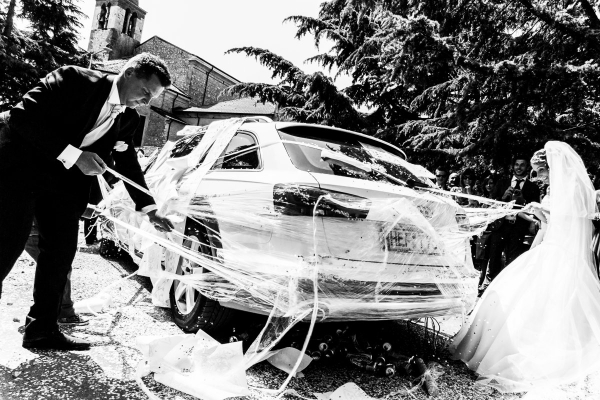 It was the second time that I participated in the monthly photo contest on the PentaxForums and I am delighted that my photo won the contest "Wrapped, Covered, or Packaged". I looked forward to the outcome of the contest and I burst with joy at the news that I had won!

I made this photo at the wedding of a friend in Verona. I was not the official photographer of the wedding but all the same I brought my K10D with me.

I did other shots that day .. almost 800, but this was the one most in theme with the contest. On that day the sun was shining and everyone had colorful clothes.

I like to take pictures when people are not posing. It is more difficult because you do not know how the photos will turn out when you do not stop people and ask them to pose - but I like spontaneous photos!

When I saw this shot in color I immediately decided to do it in black and white in post processing because the groom, bride and car were all black or white.

Many thanks to all for the nomination and see you all at the next contest shoot out!