The winning entry in the May, 2013 monthly contest 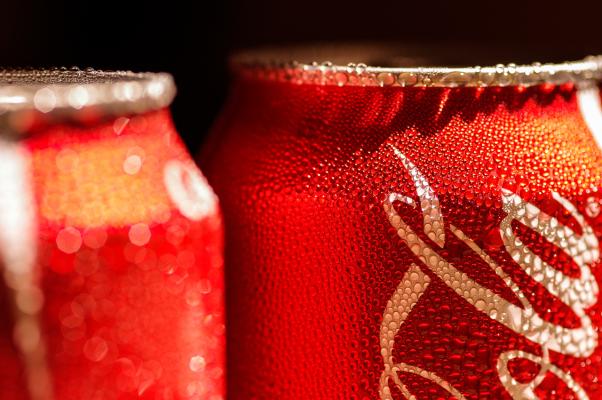 I had the idea for this shot one afternoon, when I had put my can of Coke in the freezer and left it in there a little too long, so that when I took it out I could hear that it had partially frozen.

I left it on the bench to thaw out and as it did, the condensation formed and the afternoon light hit it, and I noticed all the droplets of water on it, and thought they looked amazing. So the next afternoon I put two cans in the freezer, and I even wet them first, just to make sure I would get that “thawing” look all over the cans. It was January, which in Australia is the middle of summer, so putting them in the afternoon sun, even inside, means it isn’t long before I got the thick condensation look I wanted.

My original intention was to get extremely close to the cans, getting just a few droplets of water in the frame – and those are the shots I took first. But although the sun glistening in the droplets was nice, it just didn’t work; it looked like drops of water on a red background, nothing more.

So I went wider, and tried placing one can right behind the other so as to get one completely out of focus and basically played with that idea – but then that just looked like I’d taken a photo of my can of drink, and nothing more.

Eventually I found that half way – not too wide, not too tight – was what I wanted. It didn’t exactly feel right when I took it, but when choosing one to submit for this contest, I realised that the fact that you can only see part of the Coke logo contributes to the photo, because we all know what it is but really we can only see three letters.

The other reason I went with the photo was that it’s tight enough to see the details in those droplets, which really coveys the sense of cold, but wide enough to get a bit of composition and some other bigger details (like the fact that it's two cans of drink).

Lastly I like the play of focus with the left hand side can, the front of the rim is completely bokeh, turning every single drop of water into an octagonal highlight, and the back of it is crisply focused, bringing the attention back to those droplets and their individual beauty.

There’s no extensive post processing here – and being such an old photo of mine (18 months ago), I was still shooting in JPEG, which I can barely fathom now, but to bring out the detail I actually used the ‘clarity’ slider in Lightroom 4, which is normally a fairly untouched slider for me – so from this experience, I guess I’d say I’ve learned two things, mainly:

Thanks to all who voted for my image or read this. If you would like, please help yourself to a free download of this image or any of the others I have, as a desktop background or screensaver (1920x1080 for widescreen full HD monitors). When you’ve selected the photo, click the magnifying glass and select “Original” to make sure you get the full resolution photo here.